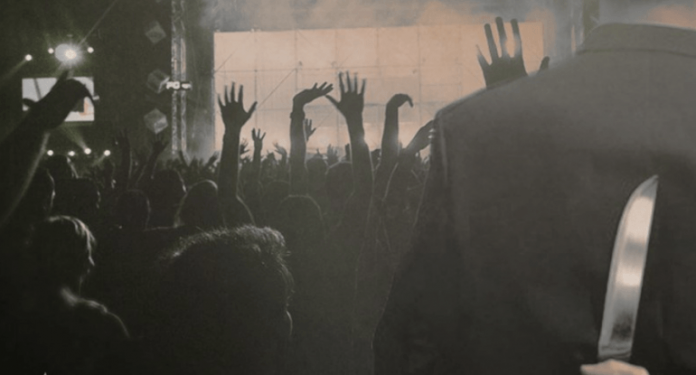 It has happened before — Bataclan, Manchester — and could easily happen again.

Shortly after the one-year anniversary of the mass shooting that targeted an outdoor concert on the Las Vegas Strip, a pro-ISIS media group is circulating an online poster warning of knife attacks at musical events.

Previous releases from Remah Media Production included a January poster showing a jihadist standing in front of a cityscape vowing to “sink America” and another showing jihadists standing in front of a nondescript legislative building vowing that “soon you will taste agony.” The group has also released video nasheeds, or songs to inspire terrorists.

In the new poster, a jihadist wearing a suit jacket stands with a large knife behind his back while behind concert-goers whose attention is fixed on the stage.

“Wait for our surprises,” warns the text, signed “Islamic State.”

In May 2017, a suicide bomber claimed by ISIS killed 22 people leaving an Ariana Grande concert at the Manchester Arena in the UK. Since the Oct. 1, 2017, massacre on a country music festival, ISIS has both claimed and idolized shooter Stephen Paddock, encouraging would-be terrorists to poach from his tactics such as how he used a sniper’s perch in a suite on the 32nd floor of the Mandalay Bay to kill 58 people and wound hundreds more.

Official ISIS media persisted for a few months in claiming responsibility for the massacre. ISIS featured an update on the shooting investigation in a mid-October issue of their al-Naba newsletter, referring to Paddock both by that name and the nom de guerre Abu Abdul Bar al-Amriki, which they bestowed upon the killer the day after the attack. The shooting “highlights the difficulties faced by U.S. cities to protect their own Crusader citizens from attacks that can take unpredictable forms,” the newsletter said.

In an earlier issue of al-Naba, ISIS printed a full-page infographic on the shooting with a Mandalay Bay hotel covered in blood, claiming that Paddock had converted to Islam six months before.

Quickly after the massacre, ISIS claimed through their Amaq news agency that the “Las Vegas attacker is a soldier of the Islamic State who carried out the attack in response to calls for targeting coalition countries.” ISIS’ official Nashir channel and affiliated al-Batar Media Foundation also insisted Paddock acted on behalf of the terror group.

The 187-page report from the Las Vegas Metropolitan Police Department issued two months ago said investigators found nothing to support claims that Paddock acted on behalf of ISIS.

“Paddock was not a religious person, did not believe in any higher power, and found religious people to be ridiculous,” the report summarized, also noting that family members said the shooter didn’t promote any sort of political beliefs.