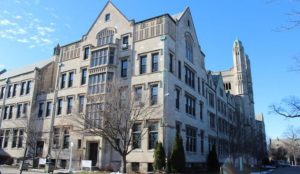 Celebrate diversity! When is an Islamic college going to offer Christians-only classes? Right, never. As always, “outreach” goes only one way, and the foolish dhimmi Christians involved in it never seem to notice that fact.

“Catholic College in Detroit is Offering Classes to an All-Muslim Group,” WDET, October 9, 2018 (thanks to Paul):

Steve Mustapha Elturk is getting his Master of Arts in Social Justice at Marygrove College, a small Catholic liberal arts school located in Detroit. During a class break, he walks down a hallway to a sparse room with a chalk board on the wall.

“This is an interfaith prayer room at Marygrove College,” says Elturk. “We have rugs in the basket for those who would like to pray during our times of prayer.”

As a practicing Muslim, Elturk prays five times a day. A few years back, the college converted the room to offer a space for everyone to pray, but particularly to accommodate its growing Muslim student population. Not long after that, Marygrove created a special social justice cohort exclusively for Muslim students like Elturk.

“Even at a Catholic college, there you go!” says Dr. Brenda Bryant, chair of Marygrove’s Social Justice Program. Bryant says the master’s program trains “scholar activists.” It was started after the September 11th attacks. This is the first time the school has had an all Muslim cohort.
WDET/Laura Herberg

The group is diverse. It’s made up of students who have been living in and around Detroit, but who originally came from the Middle East, Northern Africa, and Europe. They have professional backgrounds in media, art, education and more. Some are Sunni, some are “Shia.”

The idea for the program came from, Achmat Salie, a local Islamic faith leader who thought the program would be popular with Muslims who held high-level degrees from foreign countries that are sometimes less valued in the U.S. Bryant says the college was on board from the start. But she says some community members were a little confused as to why the group was segregated.

Related on WDET: CuriosiD: How Did Detroit Become a Center for Arabs in the United States?

“Actually when we announced it we had people say things like ‘Why did they have to meet together?’”

Bryant says the rationale was that, “We figured that as a group if they came together, they would have similar issues. And then they could support each other.”…

“Having a cohort of Muslim imams did bring readings and teachings from the Quran into the classroom,” says Burns. “You use it to build on where you’re going and make people realize, have people realize, that we are more alike than we are different. And it’s been a very good growth experience for our faculty as well as the students.”…