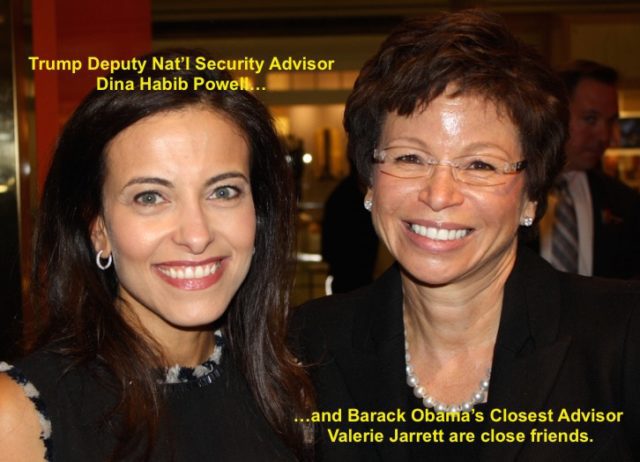 This article is from 2017; however, it describes Dina Powell, who her friends are and how she was promoted through the ranks thanks to H.R. McMaster!  This is a dangerous pick should President Trump select Dina Habib Powell to replace Ambassador Nikki Haley.  Emphasis added to sections of article below:

The former Army colonel had made his reputation by learning the lay of the land. In Iraq that meant sleeping on mud floors and digging into documents to figure out where the threat was coming from.

It was hard to imagine anyone better qualified to serve as President Trump’s top Middle East adviser at the National Security Council than a man who had been on the ground in Iraq and who had seen it all.

Just like in Iraq, Harvey began digging at the NSC. He came up with a list of Obama holdovers who were leaking to the press. McMaster, the new head of the NSC, refused to fire any of them.

McMaster had a different list of people he wanted to fire. It was easy to make the list. Harvey was on it.

All you had to do was name Islamic terrorism as the problem and oppose the Iran Deal. If you came in with Flynn, you would be out. If you were loyal to Trump, your days were numbered.

And if you warned about Obama holdovers undermining the new administration, you were a target.

One of McMaster’s first acts at the NSC was to ban any mention of “Obama holdovers.” Not only did the McMaster coup purge Harvey, who had assembled the holdover list, but his biggest target was Ezra Watnick-Cohen, who had exposed the eavesdropping on Trump officials by Obama personnel.

Ezra Watnick-Cohen had provided proof of the Obama surveillance to House Intelligence Committee Chairman Devin Nunes. McMaster, however, was desperately working to fire him and replace him with Linda Weissgold. McMaster’s choice to replace Watnick-Cohen was the woman who helped draft the Benghazi talking points which blamed the Islamic terrorist attack on a video protest.

After protests by Bannon and Kushner, President Trump overruled McMaster. Watnick-Cohen stayed. For a while. Now Ezra Watnick-Cohen has been fired anyway.

According to the media, Watnick-Cohen was guilty of “anti-Muslim fervor” and “hardline views.” And there’s no room for anyone telling the truth about Islamic terrorism at McMaster’s NSC.

McMaster had even demanded that President Trump refrain from telling the truth about Islamic terrorism.

Another of his targets was Rich Higgins, who had written a memo warning of the role of the left in undermining counterterrorism. Higgins had served as a director for strategic planning at the NSC. He had warned in plain language about the threat of Islamic terrorism, of Sharia law, of the Hijrah colonization by Islamic migrants, of the Muslim Brotherhood, and of its alliance with the left as strategic threats.

Higgins had stood by Trump during the Khizr Khan attacks. And he had written a memo warning that “the left is aligned with Islamist organizations at local, national, and international levels” and that “they operate in social media, television, the 24-hour news cycle in all media and are entrenched at the upper levels of the bureaucracies.”

Like Harvey and Ezra Watnick-Cohen, Higgins had warned of an enemy within. And paid the price.

McMaster’s cronies had allegedly used the NSC’s email system to track down the source of the memo. The left and its useful idiots were indeed entrenched at the upper level of the bureaucracy.

Like Harvey and Watnick-Cohen, Higgins had also become too dangerous to the Obama holdovers. Harvey had assembled a list of names and a plan to dismantle the Iranian nuclear deal. Watnick-Cohen had dug into the Obama surveillance of Trump officials. And Higgins had sought to declassify Presidential Study Directive 11. PSD-11 was the secret blueprint of Obama’s support for the Muslim Brotherhood.

Pete Hoekstra, the former Chairman of the House Intelligence Committee, linked PSD-11 to the rise of ISIS and called for its declassification.

Replacing Harvey is Michael Bell. When the Washington Post needed someone to badmouth Dr. Gorka, they turned to Bell: the former chancellor of the College of International Security Affairs at the National Defense University.  Bell suggested that Dr. Gorka was an uneven scholar. And Dr. Gorka was accused of failing to incorporate other perspectives on Islam.

The pattern has never been hard to spot.

McMaster forced out K.T. McFarland from her role as Deputy National Security Advisor. Slotted in was Dina Habib-Powell.

McFarland was an Oxford and Cambridge grad who had worked at the Pentagon for the Reagan administration. Dina Habib-Powell had no national security background. She was an Egyptian-American immigrant and former Bush gatekeeper whose pals included Huma Abedin and Valerie Jarrett.

Powell, who has been described as the Republican Huma, said that Abedin “feels a deep responsibility to encourage more mutual understanding between her beliefs and culture and American culture.”

When visiting Egypt, Habib-Powell had assured the locals of how Bush, after September 11, “visited a mosque, took off his shoes and paid his respects.” “I see the president talk of Islam as a religion of peace, I see him host an iftar every year,” she gushed.

K.T. McFarland had written that “Global Islamist jihad is at war with all of Western civilization.”

It’s not hard to see why McMaster pushed out McFarland and elevated Habib-Powell.

Habib-Powell had attended the Iftar dinner with members of Muslim Brotherhood front groups. You can see her photographed at the American Task Force of Palestine gala. The ATFP was originally Rashid Khalidi’s American Committee on Jerusalem. She was there as a presenter at the Middle East Institute after a speech by Hanan Ashrawi. Her achievements under Bush included cultural exchanges with Iran, as well as cash for the Palestinian Authority and for Lebanon after the Hezbollah war with Israel.

While President Trump fights to restrict Muslim immigration, at his side is the woman who had once bragged on CNN, “Over 90% of student visas are now issued in under a week, and that is in the Middle East.”

But that is typical of the McMaster revamp of the NSC. It’s populated by swamp creatures who oppose the positions that President Trump ran on. And who are doing everything possible to undermine them.

President Trump promised a reset from Obama’s anti-Israel policies. McMaster picked Kris Bauman as the NSC’s point man on Israel. Bauman had defended Islamic terrorists and blamed Israel for the violence. He had urged pressure on Israel as the solution. Ideas like that fit in at McMaster’s NSC.

Meanwhile Derek Harvey, who had tried to halt Obama’s $221 million terror funding prize to the Palestinian Authority, was forced out.

This too is part of the pattern. As Caroline Glick has pointed out, the personnel being purged in the McMaster coup “are pro-Israel and oppose the Iran nuclear deal.”

When Adam Lovinger urged that “more attention be given to the threat of Iran and Islamic extremism,” his security clearance was revoked.  Robin Townley was forced out in the same way.

Why does Susan Rice, who is alleged to have participated in the Obama eavesdropping on Trump people, need access to classified information? What national security purpose is served by it?

The same national security purpose that is served by McMaster’s purge of anyone at the NSC who dares to name Islamic terrorism, who wants a tougher stance on Iran, and who asks tough questions.

And the purge of reformers and original thinkers is only beginning.

The latest reports say that McMaster has a list of enemies who will be ousted from the NSC. And when that is done, the NSC will be a purely Obama-Bush operation. The consensus will be that the Iran Deal must stay, that Islam has nothing to do with Islamic terrorism, that we need to find ways to work with the aspirations of the Muslim Brotherhood, and that Israel must make concessions to terrorists.

If you loved the foreign policy that brought us 9/11, ISIS, and billions in funding to terrorists from Syria to Libya to the West Bank, you won’t be able to get enough of McMaster’s brand new NSC.

And neither will America’s enemies.

The swamp is overflowing. The National Security Council is becoming a national security threat.

President Bush was a good man. And he meant well. But he was surrounded by officials who lied to him. They filled his administration with appeasers and paraded Islamists through the Oval Office. And by the time they were done, thousands more Americans had died and Islamists had developed an even bigger foothold on American soil than they had before September 11. This cannot be allowed to happen again.

If you love America, if you believe that Islamic terrorism needs to be fought, not appeased, then it’s time to take a stand against the McMaster coup and his Obama holdover allies, for our security and future.

It’s not just about a bunch of names. It’s about the survival of America.