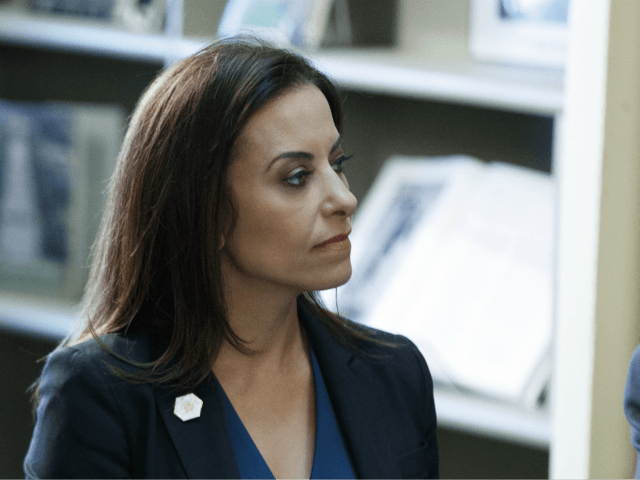 Haley announced her resignation on Tuesday, saying she will officially leave her post at the end of the year. Trump said that he would name Haley’s successor within two to three weeks.

In one of many reports spotlighting Powell, CNBC cited “three people with direct knowledge of the matter” saying senior White House officials already reached out to Powell about the possibility of replacing Haley.

Trump confirmed to reporters outside the White House that he is indeed considering Powell for the soon-to-be vacant U.N. post. “Dina is certainly a person I would consider and she is under consideration,” Trump said. He added that “there are others. I’ve heard a lot of names.”

Powell has been closely linked to the Clintons, especially through her time at Goldman Sachs, where she returned to work after departing the White House last year.

Below, in no particular order, are eight significant ties between Powell and the Clintons:

1 – When she served as president of the Goldman Sachs Foundation, the philanthropic arm of the Wall Street giant, Powell repeatedly partnered with the Clinton Global Initiative for a globalist women’s project that served as the centerpiece of Goldman’s foundation.

Powell served as president of the Goldman Sachs Foundation, where she ran the foundation’s projects after Goldman Sachs was implicated in the 2007-2008 financial crisis and sought to resurrect its shattered image.

As head of the Goldman Sachs Foundation, she specifically oversaw two major charitable initiatives, one called 10,000 Women and another named 10,000 Small Businesses. 10,000 Women aims to provide at least that number of women around the world with a business and management education to further economic opportunities and global financial growth. 10,000 Businesses, according to Powell’s Goldman bio, “provides small business owners in the US and UK with business education and access to capital.”

The projects were widely viewed as Goldman’s efforts to resurrect its tarnished image after the firm was accused of unsound practices that allegedly helped precipitate the financial crisis. “Engaging wasn’t just the right thing, it was necessary, especially in the wake of the financial crisis when people said we weren’t doing enough,” John F.W. Rogers, Goldman Sachs’ chief of staff, told the New York Times of the company’s charitable efforts.

Goldman would later agree to pay a $5 billion settlement to the Justice Department for its alleged role in the financial crisis. “This resolution holds Goldman Sachs accountable for its serious misconduct in falsely assuring investors that securities it sold were backed by sound mortgages, when it knew that they were full of mortgages that were likely to fail,” acting associate attorney general Stuart Delery announced in a statement when the settlement was finalized.

In 2014 again, 10,000 Women hosted the Clinton Global Initiative annual event. Hillary Clinton spoke at the CGI event and singled out 10,000 Women for its work. “Thanks to Goldman Sachs and thanks to 10,000 Women for really shining a bright spotlight on what is possible if you believe in and you provide support to women,” Clinton said.

At CGI’s 2013 annual meeting, 10,000 Women and other groups announced the launch of a $1.5 billion commitment to act for “global contract opportunities for women-owned businesses based outside of the U.S.”

The Clinton Global Initiative was also a “commitment to action” partner with Powell’s 10,000 Women for a $30 million, five-year program launched in 2008 to educate women in the African nations of Liberia, Nigeria and Zambia.

CGI was further a “commitment to action” partner for 10,000 Women’s $2.5 million, four-year program launched in 2009 to “provide women entrepreneurs in Peru with quality business education and enhanced access to capital.”

The Goldman Sachs Philanthropy Fund run by Powell is listed as having donated between $250,000 and $500,000 to the Clinton Foundation.

In the spring of 2011, Hillary Clinton announced in an auditorium at the State Department’s headquarters that the State Department would create a partnership with the 10,000 Women initiative to help bring the program to more countries. The New York Times characterized that support as underscoring the “long-running relationship between one of the country’s most powerful financial firms and one of its most famous political families.”

“Initiatives like 10,000 Women invest in the economic empowerment of women to promote security, stability and prosperity around the globe,” Clinton announced in a statement about the partnership with Powell’s foundation. “This new partnership with the Department of State will extend the reach of the program and provide individual women the means to build safer, stronger, families, communities and nations.”

Clinton said the partnership with State would expand the program to more countries with a focus on Indonesia and Haiti.

At a luncheon in April 2012, Powell described how women from Pakistan were educated in the U.S. as part of the 10,000 Women partnership with Clinton’s State Department.

Stated Powell: “We had our first graduation—this is a sticky situation—of this group from Pakistan on a Monday and it just so happened Melanne and I were going to speak at the Embassy of Pakistan and it happened to be the Monday after Osama bin Laden had been killed. So it was really interesting because here were these women who were just extraordinary, in the United States at the invitation of Secretary Clinton.”

On May 11, 2009, Powell was one of ten speakers at a Clinton Global Initiative event co-sponsored with the Economist titled, “Global Challenges, Corporate Solutions: Creating Value for Business and Society.” Other speakers included Bill Clinton and Clinton’s former chief of staff, John Podesta, who at the time was president and chief executive officer of the George Soros-financed Center for American Progress and co-chairman of the Obama White House transition team. Podesta would later become chairman of Hillary Clinton’s 2016 presidential campaign.

Powell also served as a panelist at the second annual Women in the World Summit in 2011, which was keynoted by Hillary Clinton.  The summit was launched by longtime Clinton ally Tina Brown, who also founded the Daily Beast, where Powell was a contributor.

6 – There are crossover connections between employees paid by Powell’s 10,000 Women and the Clintons.

Gene Sperling, who served as chief economic adviser for Clinton’s 2008 presidential campaign, reportedly earned $887,727 from Goldman Sachs in 2008 for consulting work he did to help launch 10,000 Women. Sperling had served as director of the National Economic Council under the Bill Clinton administration, and he went on to take up that same position in 2011 under the Obama administration.

Noa Meyer, global program director for the 10,000 Women program, worked in Clinton’s speechwriting office when she was First Lady. Meyer is an advisor at the Clinton Global Initiative.

Asked by Fortune magazine what she learned from working for Hillary Clinton, Meyer replied: “I think the balance that you need to strike between impact and policy work, and how you actually draw attention to the importance of that work — those two need to go hand-in-hand in order to make change.”

7 – Powell served on a global group alongside Hillary Clinton.

In 2007, Powell was named a director of Vital Voices Global Partnership, where Hillary Clinton served as honorary co-chair.

8 – In coming to Goldman Sachs, Powell joined a firm that has long been deeply tied to the Clintons.

Powell joined Goldman Sachs as a managing director in 2007 and was named partner in 2010 in addition to her role as president of the Goldman Sachs Foundation. She headedthe firm’s Impact Investing business, where she was responsible for Goldman Sachs’ “investments in housing and community development projects, deploying more than $5 billion in loans and equity investments to revitalize underserved communities in the US

Over 20-plus years, Goldman provided the Clintons with some of their most influential advisers, millions of dollars in campaign contributions and speaking fees, and financial support for the family foundation’s charitable programs.

And in the wake of the worst crash since the Great Depression, as the firm fended off investigations and criticism from Republicans and Democrats alike, the Clintons drew Goldman only closer. Bill Clinton publicly defended the company and leased office space from Goldman for his foundation. Mrs. Clinton, after leaving the State Department, earned $675,000 to deliver three speeches at Goldman events, where she reassured executives that they had an important role to play in the nation’s recovery.

The Clinton-Goldman ties solidified in the 1990’s, when Robert E. Rubin, Goldman Sachs’ co-senior partner, departed the firm to serve as the Bill Clinton administration’s Assistant to the President for Economic Policy and later as treasury secretary, a powerful economic role.

The Clinton White House famously abolished the Glass–Steagall legislation, which separated commercial and investment banking. The move was a boon for Wall Street firms and led to major bank mergers that some analysts say helped contribute to the 2008 financial crisis.

When Clinton joined the Senate, Goldman Sachs employees, who mostly lean Democrat, contributed more than $234,000 to her campaign coffers from 2003 to 2008, with the firm serving as her second largest contributor after CitiGroup.

The New York Times documented federal tax breaks that Clinton was instrumental in securing for lower Manhattan, which helped Goldman Sachs construct its nearly $2 billion New York City headquarters. Clinton was there for the November 2005 groundbreaking ceremony. “Major employers like Goldman Sachs needed to know they had a partner in government to ensure that Lower Manhattan could continue to sustain their businesses in the area,” Clinton said at the ceremony.

The Clinton Foundation utilized the Goldman Sachs headquarters in Lower Manhattan for a number of events, including a May 9, 2014 meeting with the foundation’s biggest donors attended by Bill, Hillary and Chelsea Clinton.

Lloyd Blankfein, who just exited as Goldman’s chief executive, provided a major boost to Clinton’s failed 2008 presidential bid when he endorsed her over Barack Obama and held a fundraiser in his apartment for her 2008 campaign.