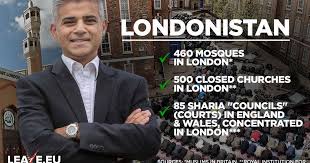 British comedian John Cleese was condemned in 2011 for saying “London is no longer an English city.” But his assessment has now been echoed by a Saudi Arabian newspaper, which writes that the U.K. “has been acquiring an increasingly Islamic face” — with a staggering 423 new mosques and 100 official Sharia courts in its capital.

As the Saudi Gazette reports:

“London is more Islamic than many Muslim countries put together,” Maulana Syed Raza Rizvi, an Islamic preacher, was quoted as saying in the local media.

…There are 423 new mosques in London and most of these mosques are crowded at prayer times unlike many churches which rarely see visitors.

The Daily Mail published photographs of a church and a mosque a few meters from each other in the heart of London. At the Church of San Giorgio, designed to accommodate 1,230 worshipers, only 12 people gathered to celebrate Mass. At the Church of Santa Maria, there were 20….

The nearby Brune Street Estate mosque has a different problem: overcrowding. Its small room can contain only 100.

Projections hold that by 2020, the number of Muslims attending regular services in London will be 683,000, outstripping the 679,000 weekly Mass attendees, according to the Saudi Gazette. This is despite London being just over 12-percent Muslim.

Altogether, the number of mosques in England and Wales has risen from seven in 1961 to approximately 1,750 today. In contrast, the Gazette states, 500 churches have been converted into private homes since 2001.

The Saudi paper also informs that there are hundreds of Sharia courts in London, with, again, 100 being “official.” This has been made possible by what some would call “dummy dhimmi” legislation, namely, the “British Arbitration Act and the system of Alternative Dispute Resolution,” as the Gazette reports.

The paper closes by pointing out that British universities are also promoting Islamic law.

Calling the British capital “Muslim London,” the Saudi Gazette’s reportage has a crowing tone, as if to boast of Islamic civilization’s increasing dominance. Note that this aligns perfectly with what Mudar Zahran, Ph.D., a leader of the Jordanian Opposition Coalition and practicing Muslim currently living as an asylee in the U.K., warned about in 2015 regarding the Muslim wave migration. “I have to be honest,” he said in an interview (video below), “you read Arab magazines and Arab newspapers, they are talking about, ‘Good job! Now we’re going to conquest [sic] Europe.’ So it’s not even a secret.”

Zahran called this “the soft Islamic conquest of the West,” but he wasn’t alone in alluding to it. Late Libyan leader Moammar Gadhafi said in 2006, “We have 50 million Muslims in Europe. There are signs that Allah will grant Islam victory in Europe — without swords, without guns, without conquest — will turn it into a Muslim continent within a few decades.”

Last year, Turkish president Recep Tayyip Erdogan called Europe a “sick man,” said the continent “will pay” for humiliating his nation, and told Turks living in Europe, “Have five children, not three. You are Europe’s future.”

Also in 2017, Italian Monsignor Carlo Liberati, indulging some hyperbole, warned that in “10 years we will all be Muslims because of our stupidity.” While it won’t happen that fast, culturally suicidal migration policies, combined with declining Christian faith and the plummeting birthrates attending it, do portend the death of the West.

Apropos here, there’s a recent story about a “10,000-year-old” Tanzanian tribe, the Hadza, that’s fighting to preserve its way of life and fears it “will be forced to adapt to Western society,” as the Star puts it. But what if we dismissively said that the Hadza must be integrated into the new Tanzania; the old Hadza culture is never coming back?

Is this cold-hearted? Does it reflect a lack of appreciation for cultural diversity? Well, know that I merely echoed (almost word for word) left-wing Swedish politician Mona Sahlin, who unabashedly said in 2001 that “the Swedes must be integrated into the new Sweden; the old Sweden is never coming back.”

Question: Why do the same people who agonize over a primitive culture’s loss celebrate and often encourage the destruction of a successful Western one?

At least in the Hadza’s case, their own members aren’t orchestrating their destruction. But as the saying goes, “We have met the enemy and he is us.” Culture is like muscle: Use it or lose it. The West is atrophying; having lost its faith and now in the grip of atheism and the correlative mistakes relativism, materialism, and nihilism, it no longer believes in itself.

In fact, atheism’s hold on native Europeans is tightening. In Britain, for example, 53 percent of the population now has “no religion,” and only 28 percent believe in “either God or a higher spiritual power.” And since atheism has as a corollary moral relativism — which itself has as a corollary cultural relativism — it’s no surprise that many Westerners don’t perceive cultural dangers. What’s the difference? All cultures are “morally” equal, right?

The good news is that, counterintuitively, religious people’s share of the world’s population is projected to grow during the next few decades. Even much-assailed Catholicism’s numbers are increasing at a rate slightly in excess of world population growth, at least according to 2016 statistics.

So, apparently, the religious may inherit the Earth. Whether Westerners will be among them is a different matter.