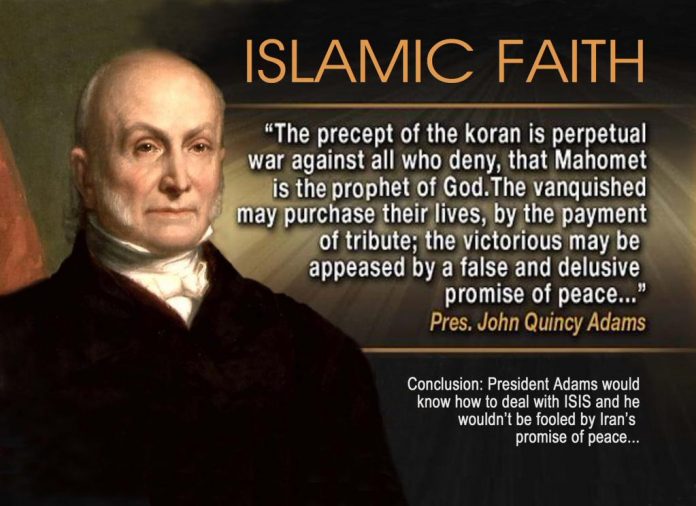 Since the Armies of Mohammad first made contact with the West, Western leaders understood Islam is a barbaric and evil doctrine that enslaves, consumes and destroys everything in its path.

“There being so many sects and heresies banded together against the Truth, finding that (Mohammad) wanting to (do battle), I thought it good to bring it to their (attention), that so viewing thine enemies in their full body, thou mayest the better prepare to encounter, and I hope overcome them.”

“This book is a long conference of God, the angels, and Mohammad, which that false prophet very grossly invented.”

Introduction to John Adams’ Koran translated into English in Springfield, Massachusetts in 1806

“(Mohammad) poisoned the sources of human felicity at the fountain, by degrading the condition of the female sex, and the allowance of polygamy, and he declared undistinguishing and exterminating war, as a part of his religion, against all the rest of mankind.  The essence of his doctrine was violence and lust.  To exalt the brutal over the spiritual part of human nature.  Between these two religions, thus contrasted in their characters, a war of twelve hundred years has already raged. The war is yet flagrant…While the merciless and dissolute dogmas of the false prophet shall furnish motives to human action, there can never be peace upon earth, and good will towards men.”

“That it was founded on the Laws of their Prophet, that it was written in their Qur’an, that all nations who should not have acknowledged their authority were sinners, that it was their right and duty to make war upon them wherever they could be found, and to make slaves of all they could take as Prisoners, and that every Musselman (Muslim) who should be slain in Battle was sure to go to Paradise.”

Letter from U.S. Ambassadors Thomas Jefferson (to France) and John Adams (to England) dated 1786 to the Continental Congress detailing the response from the muslim potentate from Tripoli when asked by the Americans why the muslims were attacking U.S. ships and capturing Americans without provocation.

“The case is clear in the case of Mohammed. He seduced the people by promises of carnal pleasure to which the concupiscence of flesh goads us. His teaching also contained precepts that were in conformity with his promises, and gave free reign to carnal pleasures. In all this, as is not unexpected, he was obeyed by carnal men. As for proof of the truth of his doctrine, he brought forward only such as could be grasped by the natural ability of anyone with a modest wisdom.

“Indeed, the truths that he taught he mingled with many fables and with doctrines of the greatest falsity. He did not bring forth any signs produced in a supernatural way, which alone fittingly gives witness to divine inspiration; for a visible action that can only be divine reveals an invisibly inspired teacher of truth.

“On the contrary, Mohammed said that he was sent in the power of his arms–which are signs not lacking even to robbers and tyrants. What is more, no wise men, men trained in things divine and human, believed in him from the beginning.

“Those who believe in him were brutal men and desert wanderers, utterly ignorant of divine teaching through whose numbers Mohammed forced others to become his followers by the violence of his arms. Nor do divine pronouncements on the part of preceding prophets offer him any witness.

“On the contrary, he perverts almost all the testimonies of the Old and New Testaments by making them into fabrications of his own, as can be seen by anyone who examines his law. It was, therefore, a shrewd decision on his part to forbid his followers to read the Old and New Testaments, lest these books convict him of falsity. It is thus clear that those who place any faith in his words believe foolishly.”

“It is utterly impossible to appreciate social values at all or to discriminate between what is socially good and socially bad unless we appreciate the utterly different social values of different wars.  The Greeks who triumphed at Marathon and Salamis did a work without which the world would have been deprived of the social value of Plato and Aristotle, of Aeschylus, Herodotus, and Thucydides. The civilization of Europe, America, and Australia exists today at all only because of the victories of civilized man over the enemies of civilization, because of victories stretching through the centuries from the days of Miltiades and Themistocles to those of Charles Martel in the eighth century and those of John Sobieski in the seventeenth century.  During the thousand years that included the careers of the Frankish soldier and the Polish king the Christians of Asia and Africa proved unable to wage successful war with the Moslem conquerors; and in consequence Christianity practically vanished from the two continents; and today nobody can find in them any ” social values” whatever, in the sense in which we use the words, so far as the sphere of Mohammedan influence and the decaying native Christian churches are concerned.  There are such “social values” today in Europe, America, and Australia only because during those thousand years the Christians of Europe possessed the warlike power to do what the Christians of Asia and Africa had failed to do, that is, to beat back the Moslem invader. It is of course worth while for sociologists to discuss the effect of this European militarism on “social values,” but only if they first clearly realize and formulate the fact that if the European militarism had not been able to defend itself against and to overcome the militarism of Asia and Africa, there would have been no “social values” of any kind in our world today, and no sociologists to discuss them.

“The Wahhabis profess a life of exceeding austerity, and what they practice themselves, they rigorously enforce on others.  They hold it as an article of duty, as well as of faith, to kill all who do not share their opinions and to make slaves of their wives and children. Women have been put to death in Wahhabi villages for simply appearing in the streets.  It is a penal offense to wear a silk garment.  Men have been killed for smoking a cigarette, and as for the crime of alcohol, the most energetic supporter of the temperance cause in this country falls far behind them. Austere, intolerant, well-armed, and bloodthirsty, in their own regions the Wahhabis are a distinct factor which must be taken into account, and they have been, and still are, very dangerous to the holy cities of Mecca and Medina, and to the whole institution of the pilgrimage, in which our Indian fellow-subjects are so deeply concerned.”

Speech given by Winston Churchill in the House of Commons, 14 June 1921

“How dreadful are the curses which Mohammedanism lays on its votaries! Besides the fanatical frenzy, which is as dangerous in a man as hydrophobia in a dog, there is this fearful fatalistic apathy. The effects are apparent in many countries. Improvident habits, slovenly systems of agriculture, sluggish methods of commerce, and insecurity of property exist wherever the followers of the Prophet rule or live.

“A degraded sensualism deprives this life of its grace and refinement; the next of its dignity and sanctity. The fact that in Mohammedan law every woman must belong to some man as his absolute property, either as a child, a wife, or a concubine, must delay the final extinction of slavery until the faith of Islam has ceased to be a great power among men…Individual Moslems may show splendid qualities, but the influence of the religion paralyzes the social development of those who follow it.

“No stronger retrograde force exists in the world. Far from being moribund, Mohammedanism is a militant and proselytizing faith. It has already spread throughout Central Africa, raising fearless warriors at every step; and were it not that Christianity is sheltered in the strong arms of science, the science against which it had vainly struggled, the civilization of modern Europe might fall, as fell the civilization of ancient Rome.”