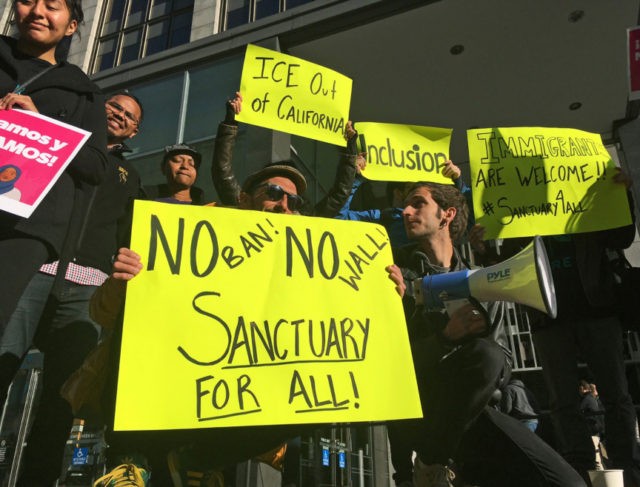 Democrats running for re-election in the 2018 midterms are being advised to not speak about the issue of immigration as consultants admit the zero-enforcement, open borders positions of the Democrat Party are unpopular with swing voters.

In a memo obtained by the New York Times, left-wing consultants with the Center for American Progress and the think tank, Third Way, advised Democrats running for election to spend “as little time as possible” talking about the immigration issue facing the nation, where more than 1.5 million immigrants are admitted to the country every year.

“Sanctuary attacks pack a punch,” says a four-page memorandum, prepared by the liberal Center for American Progress and the centrist think tank Third Way, that has been shared at about a dozen briefings for Democrats in recent weeks. The New York Times obtained a copy of the memo, whose findings are based on interviews and surveys conducted over the summer. [Emphasis added]

Democrats, the strategists who prepared the memo advised, could neutralize the attacks if they responded head-on. But they should spend “as little time as possible” talking about immigration itself, and instead pivot to more fruitful issues for Democrats like health care and taxation. [Emphasis added]

“It is very difficult to win on immigration with vulnerable voters in the states Trump carried in 2016,” the strategy memo said, arguing that “even the most draconian of Republican policies,” such as family separation and threats to deport the Dreamers — undocumented immigrants who were brought to the United States as children — failed to sway most of them. [Emphasis added]

As Breitbart News exclusively reported, House Majority Leader Kevin McCarthy (R-CA) has given the GOP ammunition to run on the issue of immigration for the midterm elections, introducing legislation that fully funds President Trump’s proposed border wall on the U.S.-Mexico border.

Meanwhile, Democrats have geared up for the 2018 midterm elections by running on a platform that would abolish the Immigration and Customs Enforcement (ICE) agency, which would end all immigration enforcement across the United States. Three in four swing voters oppose the Democrats’ “abolish ICE” initiative.

Despite Republican efforts to run on the issue of uninfluential tax reform, Trump’s immigration reduction plan has sweeping support among not only Republican voters, but swing voters and black Americans.

In an April Harvard/Harris Poll, nearly 2-out-3 supported reducing legal immigration levels to the U.S. In May, 52 percent of swing voters opposed allowing big businesses to import more foreign workers to compete against their fellow citizens for coveted blue-collar and white-collar jobs.

Most specifically, 61 percent of swing voters in battleground districts who saidimmigration has changed their community claimed those changes are making life “worse” in America.