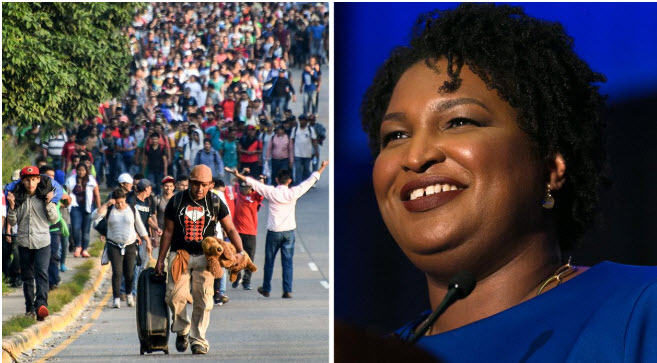 When Americans go to vote November 6, there will be a blue wave for Democrats, and it will include people casting ballots who “are documented and undocumented,” according to Georgia Democratic gubernatorial candidate Stacey Abrams.

“The thing of it is, the blue wave is African-American. It is white. It is Latino. It is Asian-Pacific Islander,” Abrams (pictured above right) told campaign workers last week during an event featuring Sen. Elizabeth Warren (D-Mass.).

“It is made up of those who’ve been told that they are not worthy of being here. It is comprised of those who are documented and undocumented,” she said. The Washington Free Beacon first reported Abrams’ remark Friday.

A spokesman for Abrams did not respond to the Free Beacon’s request for comment, but John Burke of the Republican Governors Association jumped on the opportunity.

“Stacey Abrams’ admission that she’s counting on illegal immigrants to help her campaign is further proof that she’s too extreme to lead Georgia,” Burke said.

Abrams’ remarks are certain to prompt new calls from Republicans for stricter enforcement of voter integrity laws across the country, especially since a new caravan of illegal immigrants from Central America is making its way north from Honduras hoping to gain entry into the U.S.

Earlier this year, the Public Interest Legal Foundation (PILF) documented 3,120 instances in 13 “sanctuary” jurisdictions in which a noncitizen’s voter registration had been canceled. In most cases, voter registration officials remove the names only after the noncitizens voluntarily come forward.

The loopholes that allowed those noncitizens to register in the first place are not unique to sanctuary jurisdictions. J. Christian Adams, PILF’s founder, president and general counsel, said the 1993 National Voter Registration Act encourages noncitizens to vote.

Under the law, anyone who gets a driver’s license — including green card holders and, in some states, illegal immigrants — receives a prompt to register to vote. The 1993 act was known informally as the “Motor Voter” law.

“If this is the beginning of more to come, we might actually have a real deterrent against noncitizen voting — even if we don’t reform the system.”

And the charging by the Department of Justice of 19 foreigners with illegally voting in the U.S. in August prompted PILF spokesman Logan Churchwell to say he hopes that action is a sign that the federal government is stepping up efforts to safeguard voter integrity.

“If this is the beginning of more to come, we might actually have a real deterrent against noncitizen voting — even if we don’t reform the system,” he said.