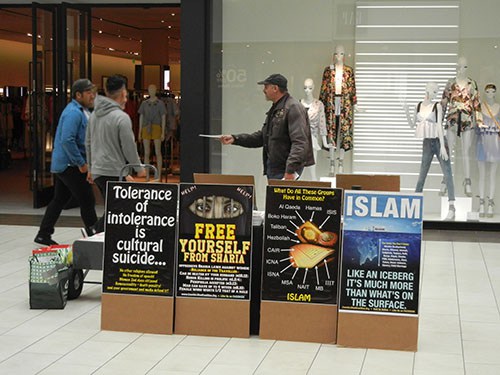 Chances are, if you speak boldly about the truth of Islam and Sharia Law you’re bound to run into resistance and conflict. Steve Amundson, the courageous and dedicated founder of the Counter Jihad Coalition (CJC) knows this all too well. He experienced a particularly disturbing incident recently that temporarily prevented him from setting up his booths and getting his message out.

The CJC exists to educate people on the truth about Islam. They do this by setting up tables at different venues, such as the shopping mall shown in the photo above, and pass out factual, truthful brochures. On a given day, they can give out as many as 1,000 brochures.

Although most people are grateful for the information on Islam, Amundson is always on high alert for potential backlash. This past July was no exception.

Amundson and his team, including a pastor, set up their booth at the Los Cerritos Center in Cerritos, California, on July 7th. At one point, two men began snapping pictures of the booth, then getting on their phone.

After a short conversation, the Muslim man walked away from the pastor.

When Amundson found out that the man was an irate Muslim complaining about CJC’s activities, he became concerned for their safety and called security.

“I told security he left a backpack underneath our booth. The Muslim refused to take the backpack. We started to take cover behind cement pillars and told security to either call the bomb squad or have the guy pick up the backpack. He finally agreed to very carefully pick it up and security escorted him away. Security will not say at least right now if he was arrested, if the bomb squad was called or what. Was this a dry run or the real thing?”

Amundson’s subsequent application to place his table at the Mall was denied, citing security reasons.

That’s when Amundson reached out to the Thomas More Law Center (TMLC).

Thomas More Law Center attorneys wrote a letter to the Mall concerning its denial of CJC’s constitutional rights to free speech.   A few weeks after the Mall acknowledged receipt of the letter, CJC was approved.

Amundson was so grateful to have his First Amendment rights restored, that he recently sent an email out to his large group of supporters and thanked TMLC directly, and kindly encouraged his friends to donate to us.

Your ongoing support of TMLC ensures we have the resources to provide immediate legal assistance, to individuals like Steve Amundson and the CJC team.  Thank you for your continued support of the Thomas More Law Center.