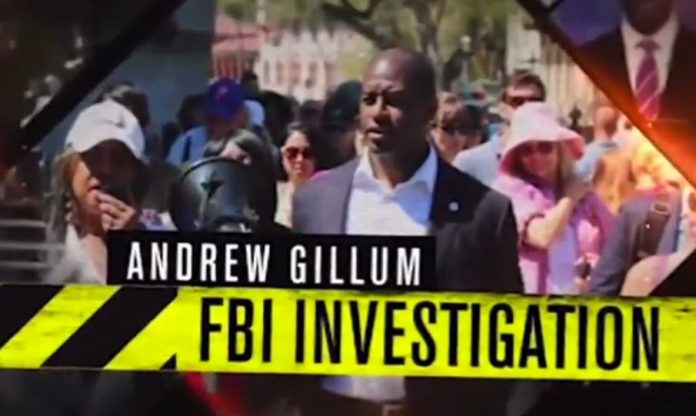 Political odds makers in Washington, D.C. and Florida are probably taking bets on whether the FBI and Department of Justice (DOJ) will give Florida’s black Democratic gubernatorial nominee, Tallahassee Mayor Andrew Gillum, a Hillary Clinton pass in the current FBI investigation into corruption in his city.

Gillum has said he is not a target of the investigation and the FBI won’t comment — at least not yet.

If he wasn’t a target before his upset victory, you can bet that he sure won’t be now.

He really has nothing to worry about!

Well, Gillum could be the first black governor of Florida.

Does anyone think that deep state remnants of Obama’s politized FBI and DOJ would do anything to interfere with that becoming a reality?

Is it a stretch to assume that the “get Trump and his supporters” odorous stench from the sewage of the Washington political swamp — including the Robert S. Mueller probe — has been inhaled by U.S. Attorneys and FBI field offices around the country?

The Wall Street Journal correctly editorialized, “Whether or not Mr. Collins is convicted, prosecutors have succeeded in killing his political career and maybe helping Democrats gain a seat in Congress.”

Hunter was indicted for misuse of campaign funds. A spokesman said the action was “purely political.”

Prior to the indictment, his attorney had written to U.S. Deputy Attorney General Rod Rosenstein — the de facto Attorney General — saying that two of the prosecutors in the case had attended a Hillary Clinton fundraiser; and, to “bring charges so close to the election would effectively deliver a ‘solidly Republican’ House seat into Democratic hands.”

President Trump tweeted his displeasure over the timing of the indictments before the midterm elections. He let it be known that he was upset with Attorney General Jeff Sessions over the action.

So, what does all of this mean for the FBI and U. S. Attorney for the Northern District of Florida’s investigation of corruption by Gillum friends and cohorts.

Will DOJ and FBI headquarters in Washington say “Cool It — leave Gillum alone. Hillary didn’t make history but Gillum could.”

Does anyone really believe that Rod Rosenstein’s DOJ and Robert Mueller sympathizers would do anything to hurt the chances of Democrat Gillum to defeat Trump devotee DeSantis in his quest to become governor of Florida in an election just over 60 days away?

Does anyone think that this DOJ and FBI would indict a black Democrat candidate for governor of Florida this close to an election — unlike what they did with the two Republican candidates noted above — and thereby help Trump surrogate DeSantis —become Governor of Florida?

Gillum has nothing to worry about. Rosenstein’s DOJ and FBI won’t permit it!

Unfortunately, a two-tiered justice system is alive and well in the United States.

Putting the FBI and DOJ aside, Gillum has another ally in his campaign to become governor — the media.

If he were a white or black Republican, you can be sure that the full force of Florida and national media would be knocking at the doors of the FBI and DOJ asking about the “investigation.”

They would put on their investigative journalist hats and do some digging into Tallahassee corruption themselves.

They would be asking tough questions about trips with lobbyists and FBI informants at the heart of the ongoing investigation.

Thus far, the media is giving Gillum mostly hands-off treatment with few questions on the impact his 40 percent corporate tax increase and the legalization of marijuana, to name just two of his proposals, would have on the state.

Questions regarding the impact of his policies on Florida’s family tourist industry — which he would probably sacrifice to unlimited outside casino gambling interests and dollars —are not and probably won’t be raised by Florida’s media.

With the FBI, DOJ, and major media on Gillum’s side, Ron DeSantis is in for the fight of his political life.