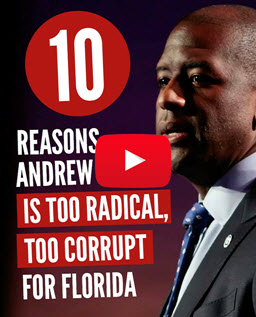 It’s scary how much people don’t know about Andrew Gillum, his record of corruption and his radical agenda. That is why today we released a new animated graphic sharing 10 reasons why Andrew Gillum is too radical and too corrupt for Florida. The future of our state is at risk with Andrew Gillum.

1. Saw Tallahassee’s Average Murder Rate Increase by 52% on his watch from 2010-2017.
Gillum says he has provided exemplary leadership as a mayor, but in reality more people have been murdered under Gillum’s watch as Tallahassee’s average murder rate has increased 52 percent from 2010 to 2017. Gillum served as a city commissioner from 2003 to 2014 and was elected mayor in 2014. Learn more: TallahasseeReports.com

2. Said NO to More Police in Tallahassee but Yes to $2 Million in Tax Dollars for His Friend’s Restaurant.
Gillum says he will protect the state’s most vulnerable, but when it came to protecting his own residents he repeatedly denied law enforcement requests for additional police officers in Tallahassee but approved $2 million in taxpayer funding for a restaurant now at the center of an
ongoing FBI investigation. Learn more: TallahasseeReports.com

3. Closely Linked to an Ongoing FBI Investigation AND Vacationed With Undercover FBI Agents and Lobbyists in NYC and Costa Rica.
Gillum says he is transparent and open, but in reality he refuses to come clean about a suspicious $15,000 deposit in his bank account and who paid for the luxury trip to Costa Rica he took with undercover FBI agents in 2016. Learn more: ReleaseTheReceipts.com

4. Wants to Raise Taxes by Over $1 Billion.
Gillum says he wants to provide hope for those who are left out, but in reality he wants to raise taxes by $1 Billion on hardworking Florida families so that he can pay for his radical agenda. Learn more: PolitiFact

5. After Hurricane Hermine, Refused Help From Non-Union Electric Workers, Leaving Thousands Without Power For Even Longer.
Gillum says he wants to lead our state, but he failed the people of Tallahassee when Hurricane Hermine devastated the community, refusing additional help and admitting mistakes were made. Learn more: Politico

7. Supported by Ultra-Liberal Billionaires George Soros and Tom Steyer AND Socialists Bernie Sanders and Alexandria Ocasio-Cortez.
Gillum says he is not a far-left socialist, but in reality his agenda is taken directly from ultra-left billionaires George Soros and Tom Steyers and socialists like Bernie Sanders and Alexandria Ocasio-Cortez. Learn more: Politico | CBS News

8. Wants a $33 Trillion Single-Payer Health Plan That Would Take Away Current Coverage for Floridians.
Gillum says that healthcare should be a right, but in reality he wants to impose a single-payer healthcare system which would cost $33 TRILLION and take away everyone’s current health insurance. Learn more: CNN

9. Opposes School Choice but Stands With Union Bureaucrats.
Gillum says he wants our children to succeed, but in reality he wants to take away school choice opportunities from over 140,000 minority, poor and uniquely-abled students because he cares more about union bureaucrats than students and teachers. Learn more: rondesantis.com/education