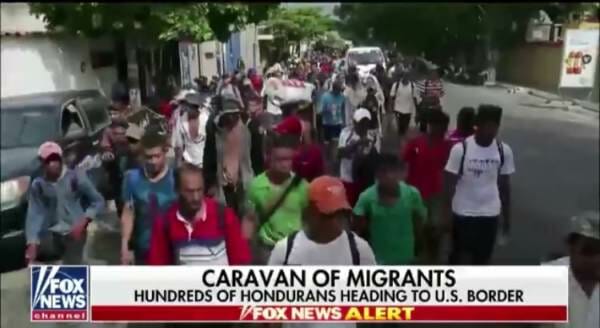 The horde of migrants are mainly military-aged virile males; this is an invasion.

“The Secretary of Social Communication of the Presidency, Alfredo Brito, indicated that the data on these captures are “protected information of National Security”.

Judicial Watch sounded the alarm this week and reminded the public that several of the terrorists were Syrians caught with fake documents, according to Guatemala’s head of intelligence. At the same event, President Morales also revealed that Guatemalan authorities captured more than 1,000 gangbangers, including members of the MS-13.

The media constantly shows pictures and video clips of female migrants with crying babies, but the caravan is full of military-aged males; certainly ISIS terrorists and other dangerous criminals are embedded in the horde.

Video of the migrants breaching the gate in Guatemala clearly shows the majority to be young, virile males:

Additional footage of male migrants rushing the bridge into Mexico:

The migrant caravan broke down the border gate and flood across the bridge into Mexico.

This is a damn invasion.

On Wednesday, the caravan of Honduran migrants exploded to a whopping 4,000 people as it approached the Guatemala-Mexico border, despite President Trump’s warnings to cut off U.S. aid.

The caravan started out with approximately 1,300 people and ballooned as it made its way through Guatemala.

Certainly ISIS fighters and other dangerous drug cartel members and MS-13 gangsters latched onto the caravan to sneak into the U.S. pretending to be asylum seekers.

President Trump threatened to send the military to the southern border to push back the migrant caravan.