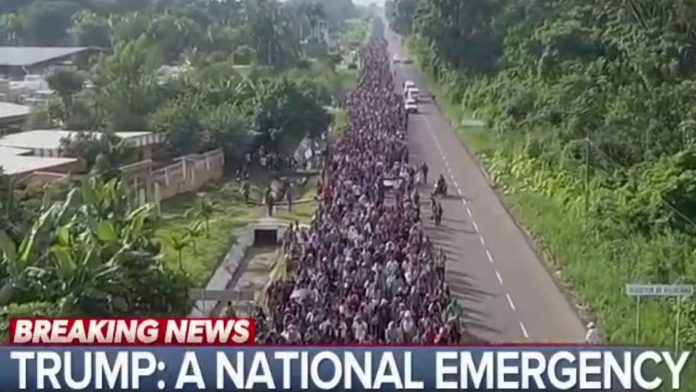 CNN on Monday once again posed as the intrepid and impartial fact checker, correcting the falsehoods spread by our ridiculous and hateful President, with the headline: “Trump seizes on right-wing media reports to suggest migrant caravan has been infiltrated by ‘unknown Middle Easterners.’” And as usual, the President is in reality far closer to the mark than CNN ever is. CNN has once again proven itself to be, as Trump has so aptly and indelibly put it, very fake news.

CNN noted that “In a tweet, the President warned that ‘criminals and unknown Middle Easterners are mixed in’ the caravan of thousands of Central American migrants fleeing poverty and violence.” Note CNN’s thumb on the scale in its framing of the story: the hordes advancing toward the border are “Central American migrants fleeing poverty and violence,” not “A large cadre of military-age males being transported to the American border to flout immigration laws and create provocations designed to discredit Trump before the midterm elections.”

After that bit of legerdemain, CNN informs the Leftist marks who still take it seriously that Trump is, as expected, all wrong and going off half-cocked yet again: “The President did not support his claim with any evidence. Sarah Sanders, the White House press secretary, told reporters on Monday afternoon that Trump ‘absolutely’ had evidence to indicate there are Middle Easterners in the caravan. Sanders, however, did not provide specific information on the matter and it was still not clear what evidence Trump had to indicate the presence of such individuals in the caravan.”

The evidence is actually abundantly clear; CNN just doesn’t want you to know it exists. The Daily Caller reported Monday that Univision correspondent Francisco Santa Anna stated: “Yesterday when we were traveling through Guatemala, we noticed people from El Salvador and even people from Bangladesh. Can you imagine what they had to do to get here? They infiltrated themselves in this caravan and tried to cross with the crowd. That would have benefited them greatly.”

What’s more, Guatemalan President Jimmy Morales stated last Thursday that his security forces had caught “close to 100 people completely linked to terrorist issues, with ISIS and that not only have we arrested them within our territory, but they have been deported to their countries of origin.” Guatemala’s Secretary of Strategic Intelligence, Mario Duarte, confirmed that “the individuals intercepted, detained, prosecuted or returned to their country of origin, is close to 100.” He referred to “several citizens of Syrian origin who were detained with false documents were detained, for which they were prosecuted and subjected to criminal proceedings,” and then deported in 2016.

The establishment media has made a great deal of the fact that Morales did not say that Guatemalan authorities had caught 100 Islamic State jihadis among the throngs approaching the U.S. border now. However, this is a distinction without a difference. If Islamic State jihadis could enter Guatemala previously, they can do it again, and they may have joined this caravan.

Denis Omar Contreras, a leader of this latest march to the border, summarily dismissed this possibility: “There isn’t a single terrorist here.” Claiming that everyone on the way to the United States was from Honduras, El Salvador, Guatemala and Nicaragua, he added: “As far as I know there are no terrorists in these four countries, at least beyond the corrupt governments.”

As far as he knows. But how can Denis Omar Contreras be sure? Is there something that would make it impossible for jihadis to infiltrate this migrant group? We do know that jihadis have many times attempted to enter the United States by way of the Southern border. Here are just a few news stories from the last few years, related to such efforts:

There is also considerable Hizballah activity in Latin America – activity that analysts have been warning for yearsis a threat to the United States.

But CNN and Denis Omar Contreras would have you believe that jihadists could not, simply could not possibly, have infiltrated this latest migrant caravan. Donald Trump is just being racist again to say so.

If some of those on their way to the U.S. get into the country and commit an act of jihad violence, will CNN and Contreras and all the others who are sneering at Trump today apologize? Don’t bet on it. But the best-case scenario will be that no one from this caravan will get in at all, and CNN and the rest can go back to calling Trump “racist” for keeping them out.