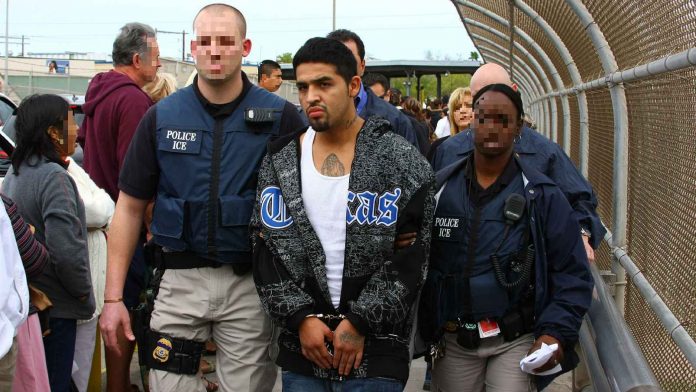 As I have been watching with growing concern the rapidly increasing numbers of aspiring illegal aliens in Latin America who are heading north towards the United States, I came to draw the comparison that the aerial videos of these huge numbers of people, at least from high overhead, appear somewhat like the images of the runners participating in the New York City Marathon.

That analogy caused me to think back to March 20, 2013, during the Obama administration, when I testified before the Senate Judiciary Committee hearing on the topic, “Building An Immigration System Worthy Of American Values.”

The last two paragraphs of my prepared testimony for that hearing more than five years ago now seem all the more appropriate if not, in fact, prophetic:

Law enforcement is at its best when it creates a climate of deterrence to convince those who might be contemplating violating the law that such an effort is likely to be discovered and that if discovered, adverse consequences will result for the law violators. Current policies and statements by the administration, in my view, encourages aspiring illegal aliens around the world to head for the United States. In effect the starter’s pistol has been fired and for these folks, the finish line to this race is the border of the United States.

Back when I was an INS special agent I recall that Doris Meissner who was, at the time, the commissioner of the INS, said that the agency needed to be “customer oriented.” Unfortunately, while I agree about the need to be customer oriented what Ms Meissner and too many politicians today seem to have forgotten is that the “customers” of the INS and of our government in general, are the citizens of the United States of America.

These foreigners are massing in Latin America, heading for the United States in what is certainly a coordinated strategy to overwhelm America’s capacity to secure its borders and effectively enforce and administer its immigration laws.

That system has always lacked adequate resources or the commitment to imbue the immigration system with meaningful integrity because it is a simple matter to simply prove the great majority of applications for immigration benefits which was how previous administration generally dealt with those applications for immigration benefits and the “keys to the kingdom” that they represent.  After all, with the customer-oriented mentality of previous administrations, Democrat and Republican alike, the alien “customer” was almost always right.

Indeed, the starter’s pistol has been fired.  The only questions that demand answers are, who pulled the trigger and with what ultimate goal?

There are a number of suspects and it is entirely possible that there has been collusion by several groups that may not immediately appear to relate to one another but have come together for common purposes.

While many speculate about George Soros we must not ignore the potential that Iran may well be a major player.

This is worrying enough but there are more issues to consider and reasons why all Americans from coast to coast and border to border need to be extremely concerned.

For far too long the virtually all-encompassing focus on the U.S./Mexican border has served to convince many Americans across the United States that there are only “four border states.”  Sadly all too many of our fellow citizens are so selfish that they believed that since they did not live along the southern border in one of those “border states” that the issue of border security was of no real concern to them.

I have frequently noted that our nation has 50 border states, any state that has an international airport, access to our nation’s 95,000 miles of coastline or lies along the northern as well as the southern border are all border states.

Today, however, the focus is on that extremely porous and highly dangerous U.S./Mexican border.

If these aliens are able to ultimately gain entry into the United States they will not emulate Neil Armstrong or the other Apollo astronauts who grabbed some lunar samples, planted a flag and promptly flew back to Earth.  These aliens are likely to fan out across the United States potentially impacting every state of our nation for decades to come.

They would be undoubtedly drawn to Sanctuary Cities that will welcome them like conquering heroes.  The terrorists among them could use those cities as staging areas as they embed themselves, hiding in plain sight, in preparation for the day they are called into action.

In point of fact there is a huge population in NYC comprised of illegal aliens who entered the United States without inspection along our northern and southern borders.

Nearly a year ago I wrote an article, “New York City: Hub For The Deadly Drug Trade,” wherein I discussed the fact that the only reason that the Mexican drug cartels had decided to make the City of New York their central hub for their drug trafficking operations on the east coast was due, in large measure, to the sanctuary policies of New York City.

Of course the Radical Left and their allies in the Mainstream Media has decried President Trump’s concerns that among these aspiring aliens are criminals and aliens from the Middle East and potentially terrorists.

Of course the fact that the President receives a daily briefing from the intelligence services does not matter to these supposed “journalists” who simply write off the President’s statements as “right-wing fear mongering.”

Just this evening my local CBS radio anchor proclaimed that the Caravan of Central American migrants was bringing desperate immigrants looking for a better life.

Somehow it did not occur to the reporter to ask why these aliens would want to come illegally rather than legally.  The U.S. has the most generous legal immigration system on the planet.

Nor did he question that perhaps they weren’t all from Latin America.

It must be presumed that these supposed “journalists” have blithely ignored the testimony of numerous expert witnesses who have testified before a long string of hearings in the House and Senate.  It must also be presumed that these “journalists” have never read the 9/11 Commission Report and/or the official report, 9/11 and  Terrorist Travel – Staff Report of the National Commission on Terrorist Attacks Upon the United States.

Both reports made it clear that the 9/11 terror attacks and other terror attacks the Commission studied were only possible because of multiple failures of the immigration system.

In November 2001, shortly after the terror attacks of September 11, 2001 I was called to testify before the Immigration Reform Caucus that was attempting to uncover how our nation could be so devastatingly fall victim to a terror attack carried out by aliens who had, in one way or another, been able to enter the United States and go about their deadly preparations by exploiting failures of the immigration system by violating various immigration laws as well as other laws.

On December 10, 2001 my prepared testimony for that hearing was submitted to the Congressional Record by then Chairman of the Immigration Reform Caucus, Rep. Tom Tancredo. Here is an excerpt from my testimony you must take to heart:

It is often said that you only get one opportunity to make a first impression.  Generally speaking, the first laws that aliens entering the United States encounter are those laws that the INS (Immigration and Naturalization Service) is supposed to enforce.  When the INS fails to effectively,, consistently and fairly enforce those laws, we are sending a very dangerous message to aliens seeking to enter the United States.  In effect we are telling them that not only can they expect to get away with violating our laws, they can anticipate being rewarded for violating our laws.

Many years have passed since that hearing.  More deadly terror attacks have since been carried out, while still other unsuccessful attacks have been attempted to be carried out, all by aliens who, in one way or another exploited multiple failures of the immigration system.

As the number of aliens who apply for asylum grows the system will ultimately implode and obliterate any vestige of integrity to a system that is a major component of national security.

The Left would call this fear mongering- I call it “Connecting the dots.”