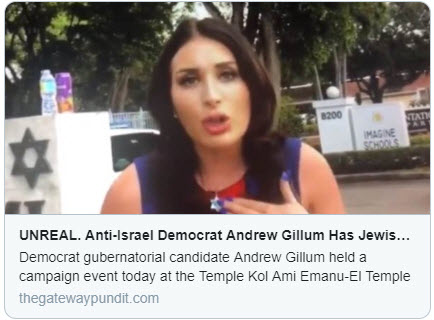 MUST WATCH: Today in Plantation, FL at Temple Kol Ami, @AndrewGillum had me, A JEWISH WOMAN forcibly removed from the SYNAGOGUE while I was peacefully waiting for the event to begin.

Gillum wants to be the next Governor of #Florida, but we don’t want another Hitler! @RepDeSantis pic.twitter.com/y7ghGly5CL

As a Jew I’m disgusted, @AndrewGillum threw out @LauraLoomer from a “SYNAGOGUE”, we swore never again will Jews be thrown out of their synagogues but it happened in Florida, Gillum is an Anti-Semi who hates Jews hates Israel, are Floridians really going to elect this guy? #MAGA pic.twitter.com/cTE8QwfGgh