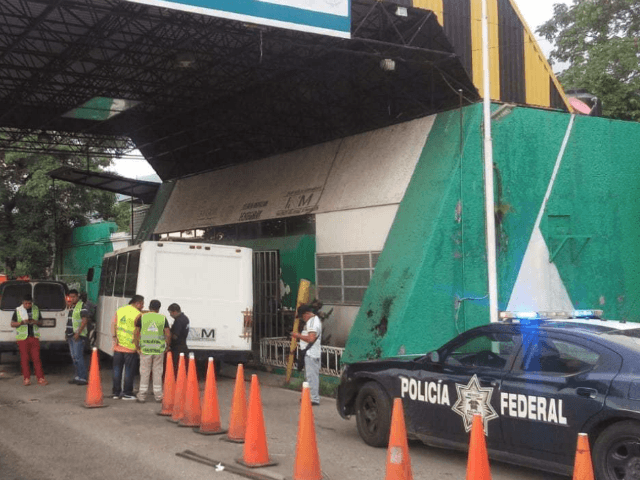 A group of Central American migrants facing deportation set fire to a Mexican immigration facility in an apparent attempt to escape. The alleged arson comes at a time when Mexican authorities reported the use of firearms and Molotov cocktails within the migrant caravans as they make their way through Mexico to the United States.

The fire was reportedly started at a facility dual-purposed as a checkpoint and makeshift detention center for Mexico’s National Migration Institute (INM) in Pijijiapan, Chiapas, when a group of migrants housed there set fire to their mattresses, Televisa Noticiasreported. According to local public safety director Jaime Marroquin, authorities were housing 21 men, five women, and three children which were in the process of being deported. The migrants reportedly set fires to give cover to their escape.

Firefighters responded to the scene while Mexican Federal Police officers detained the alleged runaways and moved them to a large immigration facility in Tapachula, Chiapas.

The fire comes only hours after Mexican Federal Police arrested two Honduran men who allegedly shot at cops guarding the migrant caravan currently in Chiapas, Breitbart News reported. The caravan began its journey earlier this month in Honduras and publicly announced its intent to reach the U.S. border. The Mexican government offered the caravan temporary jobs, health care, and education if they agreed to stay in southern Mexico and follow the country’s legal procedures for requesting asylum. The group largely turned down the offer, however, according to the INM, 111 migrants agreed and requested Mexican identification documents.