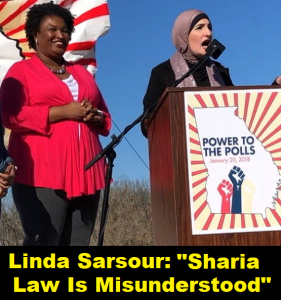 Look at who the supporters are and you will find what the candidate truly believes.  It is a good indicator of the plans and policies that will be implemented once in office!

Watch DSA chant: “From the river to the sea, Palestine will be free.” – this is a call for the genocide of the Jewish people. pic.twitter.com/dBwtxpTLeA

Linda Sarsour, whose been marched out as the role model for the “women’s” movement while wearing the hijab that is a symbol of oppression and control of women!  Who promoted Jihad against President Trump this year at the ISNA convention.  Who is antisemitic and states Sharia is “misunderstood”.

Planned Parenthood, that has been caught selling baby parts.  Pro-abortion, not a womens health support agency, but a basic destruction of human life!  Included with this video is another favorite name, Valerie Jarrett, who was Barack Obama’s right hand Marxist/Jihadist!

Eric Holder, who stated when “they go low, we kick them”.  Promoting violence against anyone who disagrees with them!  Included here you see & hear the support from Socialists Elizabeth Warren, Hillary Clinton, Jimmy Carter, and Barack Obama! All of these names have proven themselves to be willing to destroy America and do all they can to wave their power over you, making you bow down to evil!

Steve Philips, communist billionaire whose funding numerous candidates.  Whose background has proven to be very dangerous, as referenced here.

Tom Steyer, billionaire who is forever trying to spread his wealth in an effort to get President Trump impeached… and he doesn’t care how! “… met privately with former House Minority Leader Stacey Abrams…” to discuss his donations and her alignment to join his effort.

Stacey Abrams policies and plans for Georgia (not a complete list):

For those that continue to try and defend Stacey Abrams, here is a short list of her voting record. It is all public record.

This is things she voted against. It will show her beliefs.

4. Against allowing religious officials from denying ceremonies against their beliefs. 3/16/16 HB757

5. Against not allowing undocumented immigrants from serving in local government. 2/26/16 HB781

17. Against restrictions of sex offenders working around children. 1/29/08 HB908

This is all public records. If you’re for illegal immigration, against gun rights, against religious liberty and for more taxes and allowing sex offenders close to children then she is your candidate.

Just a few more video’s you need to see to be an educated voter: