In the wake of the Tree of Life Synagogue massacre by a Neo Nazi who screamed, “All Jews Must Die”, the same vile hate motivating that mass murderer is being welcomed here in Orlando.

The nationally known anti semitic hate speaker is Dr. Yasir Qadi, whose  lecture is being sponsored by the UCF and Rollins College Muslim Students’ Association, Valencia Peace and Justice Institute, and the Valencia College Muslim Ambassadors For Peace.

Dr. Yasir Qadi has a dark resume that has been sourced and verified by CanaryMission.org.  I challenge every interested person and critic to go to the Canary Mission website, enter Dr. Yasir Qadi, and verify all facts and evidence presented to you today.

Dr. Yasir Qadhi said this:  On November 17, 2014, Qadhi suggested on Facebook that the United States and other Western governments were behind the rise of ISIS.

Dr. Yasir Qadhi also said: “Hitler never intended to mass-destroy the Jews. There are a number of books out written by Christians on this, you should read them. The Hoax of the Holocaust, I advise you to read this book, you may want to write this down, the Hoax of the Holocaust, a very good book. All of this is false propaganda and I know it sounds so far-fetched, and these theories, but read it. The evidences are very strong. And they’re talking about newspaper articles, clippings, everything and look up yourself what Hitler really wanted to do. We’re not defending Hitler, by the way, but what the Jews, the way that they portray him, also is not correct.”

In another lecture, Qadhi related tales alleging that a Jewish prankster embarrassed a Muslim woman and that treacherous Jews — “ethnically and culturally different from the local population” — schemed to assassinate Muhammad.

On August 19, 2014, Qadhi said on Facebook: “Israel is following some of the very same tactics that Nazi Germany did, in dehumanizing Palestinians.”

The April 11, 2017 Dominic Kennedy of  The Sunday Times reports, “Yasir Qadhi, a Saudi-educated American academic, has been recorded apparently telling students that killing homosexuals and stoning adulterers was part of their religion. Dr Qadhi, who features in an eight-city tour starting this month, described Islamic punishments such as cutting off the hands of thieves as “very beneficial to society”.

Dr. Yasir Qadi’s world view could incite others to violence.  We saw what the teachings of the Neo-Nazi movement did to the shooter of the Tree Of Life Synagogue several days ago.

All people of conscience living in Central Florida have a duty and an obligation standing up to these pathological speakers like Dr. Qadi.

The subject of the lecture Dr. Yasir Qadhi will be speaking on is, “Role Of Muslims in Promoting a Culture of Peace”.   Dr. Qadhi’s past comments of anti semitism, homophobia, and holocaust denial should disqualify him immediately from lecturing at Valencia College unless, the duplicitous nature between the speaker and title of the lecture is intentional?

What are the sponsors of this lecture trying to hide by naming their talk something so nice and uplifting while Dr. Qadhi’s comments are so vile and contradictory. How can two opposites both be true?  They can’t if you look beneath the surface.

Dr. Yasir Qadi is a wolf in sheep’s clothing along with those groups who would expend resources bringing him to Valencia College in Orlando, FL.  on November 12, 2018 11:30-1:00 PM.

Call Valencia College and let them know how Dr. Yasir Qadhi’s comments divide us as a community
rather than unite us.

HE DOES NOT PROMOTE “A CULTURE OF PEACE” ! 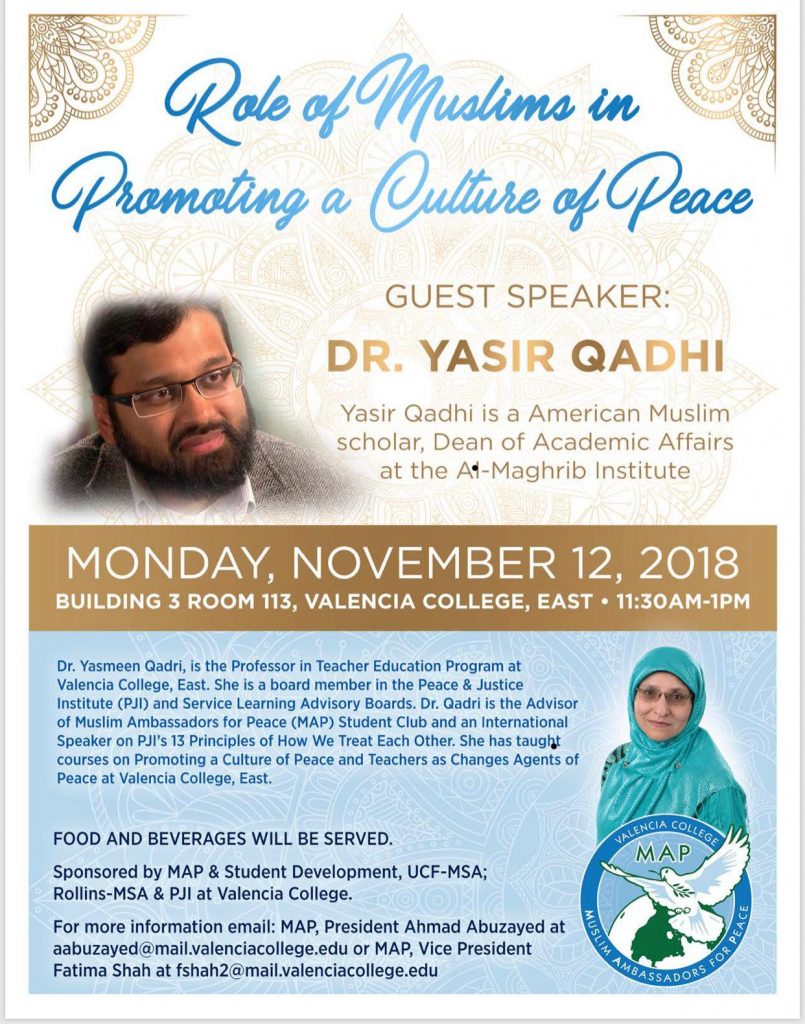