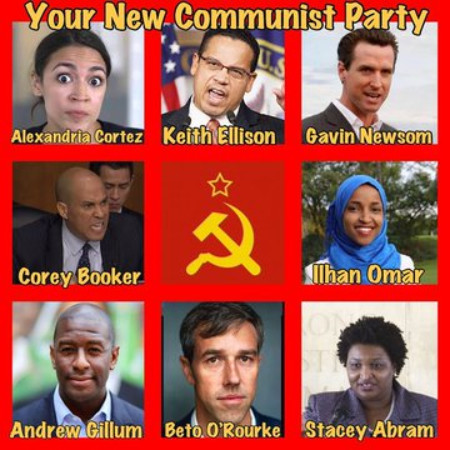 Today’s Democrat is not really a Democrat. As far back as the 1930s, the Soviet Union targeted the Democrat Party for infiltration. They were wildly successful during that time, especially in planting Soviet agents throughout the FDR administration. Those Soviet agents helped direct our war effort to save the USSR from the Nazis, wrote the founding document that formed the UN, created the World Bank and the International Monetary Fund, and saw to it that Mao’s Communists would take over China.

It only got better. Immediately following our victory in WW II, Soviet agents working in the Office of Strategic Services (OSS), the precursor to the CIA, saw to it that the American military was directed to Communist and pro-Communist Germans in the reconstruction of Germany, while anti-Communist Germans were discredited. They also sought to ensure only pro-Mao OSS agents advanced in the Chinese theater of operations. In the critical time before Mao’s Communists defeated Chiang Kai-shek’s Nationalists, Soviet agents in the Truman administration successfully prevented critical support from reaching Chiang.

Senator Joseph McCarthy, who correctly identified Communists working in the U.S. government, was successfully discredited by a vigorous, Communist inspired campaign, aided by McCarthy’s political and bureaucratic opponents. McCarthy may have been a flawed individual, but he would have received that same treatment if he was Mother Teresa. The notion that the U.S. government was saturated with Communists had to be stomped out, and the messenger made an example of. The long term consequence was a stifling of speech about Communism. It became the “C” word. Just mention the word and you were accused of “red-baiting.” Sounds a lot like all the “racist” charges leveled at open borders opponents, doesn’t it? Anyone using the “C” word could be pilloried as a “conspiracy theorist” despite the fact that Communism only survives as a conspiracy of lies. The truth kills it.

The 1960s red-diaper baby radicals infiltrated our institutions as they grew up and weaseled their way into professional positions during the 1970s. But congressional Democrats were already turning Red. It was the Democrat Party, in control of Congress, that defeated us in the Vietnam War. It was not our military leadership, though they could have done better. It was the left-wing political class, ruled by Democrats, and egged on by street radicals, that abandoned our Vietnamese ally despite promising Vietnam that military aid and air cover would continue after America pulled out. They lied.

In addition to the 55 thousand American lives squandered directly as a result of Democrat treachery, millions of Vietnamese were killed and hundreds of thousands fled. Our most loyal Vietnamese allies, the Central Highlands indigenous Degar tribes, often referred to as Montagnards, or just “yards,” continue to be persecuted to this day.

The Democrats who accomplished this monumental defeat were not stupid, they were treasonous. And in a last ignoble action, Senators John Kerry and John McCain willingly and knowingly left American POWs behind to facilitate normalization of relations with the Communists. Having outlived their usefulness as bargaining chips, those men were doubtless executed. The whole chapter is a national disgrace. Unfortunately none have ever been brought to justice.

In the 1980s we saw Democrat members of Congress travel to Nicaragua to caucus with Daniel Ortega’s Communist Sandinistas about how to oppose President Reagan’s anti-Communist policies in Central America. During the Salvadoran civil war, extreme Left politicians like Nancy Pelosi and Barbara Boxer supported CISPES (the Committee in Solidarity with the People of El Salvador), a group formed by Farid Hándal, the brother of Salvadoran Communist Party leader Schafik Hándal. As with the Nicaraguan civil war, the Democrats actively opposed Reagan’s policies in El Salvador.

The FMLN (Farabundo Marti National Liberation Front) Communist guerrilla group that initiated the Salvadoran Civil War was put together by Fidel Castro from five disparate Salvadoran Communist groups. They committed massive atrocities, though the only atrocities publicized were those committed by their opponents — who did commit some, but nothing like the Communists.

Following the war, the FMLN entered the political process. When FMLN leader Mauricio Funes was elected President of El Salvador in 2009, Democrat Tom Perez, now DNC chairman, congratulated Funes on his victory. As with Venenzuela, El Salvador is now firmly in the Communist camp. Funes was replaced in 2014 by Salvador Sánchez Cerén, another FMLN member. There are doubtless purges and mass murder going on in El Salvador as they are in Venezuela now, but this is an inconvenient truth their cheerleaders in the media and Democrat Party would rather you don’t know about.

Fast forward to today. The Congressional Progressive Caucus is the largest political caucus on the Democrat side, comprised of 79 members of the U.S. House and one member of the U.S. Senate, the “Independent” senator, Bernie Sanders. Bernie calls himself a “Socialist.” The rest call themselves “progressives.” Be clear on this. They are all Communists.

Their connections to the Communist Party USA, the Democratic Socialists of America (which is Communist also, but with a cuter-sounding name), and other extreme Left groups are undeniable. There are many more that are members in sympathy but not officially because of the optics. Nancy Pelosi, for example, quit the CPC some years ago when her membership became public. On the Senate side, many others, including Minority Leader Chuck Schumer, share that ideology.

It is irrelevant what they say. Their actions speak so loudly you can’t hear them. These are hateful, spiteful, vicious, violent, treacherous, corrupt people. They care about power at all costs. They have come out of the woodwork since President Trump’s election and have shown nothing but contempt for the American people, our government, the rule of law and for all the principles, values and traditions we hold dear.

If you like what they stand for; if you haven’t yet had your fill of “resistance;” if you enjoy endless images of Antifa thugs attacking and beating elderly Americans; if it cheers you to see GOP members of Congress and the White House confronted in elevators, restaurants and streets; if you love to hear people like Maxine Waters inciting crowds to violence and think it would be great to see her running a congressional committee; if you want to see endless violence, destruction and protest; if you hope to see our thriving economy take a nosedive into the tank; if you think it’s “justice” to see our jobs stolen by illegal aliens; if it thrills you when Democrats import masses of killers to shore up their base, while our streets run with blood from terrorist attacks and anyone who protests gets called an “Islamophobe;”  if you want all this and more, by all means vote Democrat.

If you want to continue to enjoy our economy making a record comeback, and have a shred of hope of taking back our country from these monsters, then don’t cast a single vote for any Democrat.