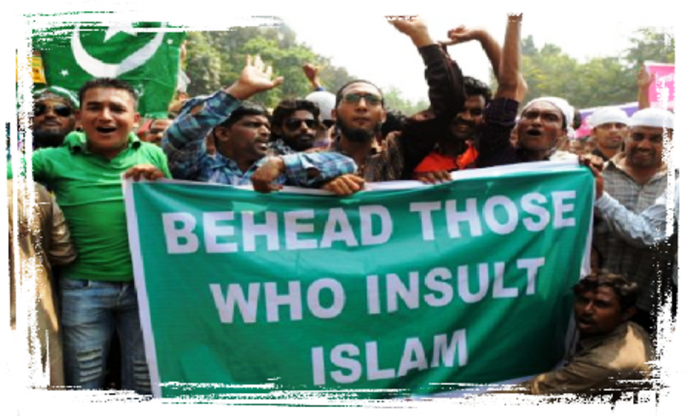 “Hang the infidel” is the cry emanating from thousands of Muslim throats in Pakistan. The reason: Asia Bibi, a Christian woman accused of insulting Islam’s prophet Muhammad, has apparently not suffered enough. As the married mother of five wrote in her smuggled memoirs: “I’ve been locked up, handcuffed and chained, banished from the world and waiting to die” since 2010.

Yet Muslims everywhere in Pakistan demand that she still be put to death.

How exactly did she “blaspheme” against Muhammad? While working in the field one hot summer day, she dared take a drink from the common well.

Her Muslim counterparts were outraged that she — a “filthy animal” and a “filthy Christian,” as they called her — had befouled their water source. As their verbal upbraiding escalated, the Christian woman dared to defend herself, prompting the outraged Muslim women to call on her to “convert to Islam to redeem yourself for your filthy religion.”

The beleaguered Christian shot back:

I’m not going to convert. I believe in my religion and in Jesus Christ, who died on the cross for the sins of mankind. What did your Prophet Mohammed ever do to save mankind?

“That’s when the hatred bursts out from all sides,” explains Asia in her memoirs. “All around me the women start screaming.” They beat and spat on her while screaming, “How dare you say such a thing about our Prophet?!”

Days later, she was imprisoned for blasphemy and sentenced to death, in keeping with Section 295-C of Pakistan’s penal code:

Whoever by words, either spoken or written, or by visible representation or by any imputation, innuendo, or insinuation, directly or indirectly, defiles the sacred name of the Holy Prophet Muhammad (peace be upon him) shall be punished with death, or imprisonment for life, and shall also be liable to fine.

Considering how touchy Muslims get whenever they hear any critical talk of Muhammad, one might miss the ironic fact that, from the dawn of Islam to now, millions of non-Muslims have been asking Asia’s question — “What did your Prophet Mohammed ever do to save mankind?” — or variants thereof.

In one infamous instance in the late 1390s, Manuel II Palaiologos, one of the Eastern Roman (or Byzantine) Empire’s most able emperors, told a group of Muslim ulema (scholars):

Show me just what Mohammed brought that was new, and there you will find things only evil and inhuman, such as his command to spread by the sword the faith he preached.

Like Asia Bibi, Manuel did not make this assertion to be provocative, but rather because he was in Muslim (Ottoman) territory, and a throng of Muslim scholars were also pressuring him into converting to Islam.

This has long been the problem: Muslims often initiate tensions by trying to persuade non-Muslims to join — or perhaps just validate — their religion, one way (persuasion) or another (jihad). But from the very start, whenever non-Muslims seriously examine the life of Muhammad — the fount of Islam — questions and criticisms arise. Then Muslims, frustrated because they cannot assuage these concerns, respond with outrage and violence.

In Emperor Manuel’s case, he managed to abscond from Muslim territory in time. Months later, Ottoman Sultan Bayezid I — described by contemporaries as “a persecutor of Christians as no other around him, and in the religion of the Arabs a most ardent disciple of Muhammad” — was laying siege to Constantinople.

Six hundred years later, Islam’s posterity remains unchanged. In 2006, when Pope Benedict passingly quoted Manuel’s position on Muhammad, wild anti-Christian riots erupted around the Muslim world: Churches were burned, Christians were beat, and an Italian nun who had devoted her life to serving the sick and needy of Somalia was murdered there.

The irony, of course, is that Benedict could have quoted any number of non-Muslims throughout history questioning and condemning Muhammad. As Professor Norman Daniel summarizes in his exhaustive study on Christian views of Islam throughout the centuries:

The character and the history of the Prophet were such as genuinely shocked them; they were outraged that he should be accepted as a venerated figure. … The two most important aspects of Muhammad’s life, Christians believed, were his sexual license and his use of force to establish his religion. … Fraud was the sum of Muhammad’s life … Muhammad was the great blasphemer, because he made religion justify sin and weakness.

Due to all this, “there can be no doubt of the extent of Christian hatred and suspicion of Muslims,” concludes Daniel.

Indeed, for Western liberals who find any criticism of Islam “Islamophobic,” the sheer amount of vitriolic content of more than a millennium of Western writings on Muhammad may beggar belief.

Nor did the theological claims behind the jihad escape scrutiny and subsequent ridicule. After paraphrasing Koran 9:111, which promises Muslims who “kill and are killed” an afterlife “of carnal eating and drinking and intercourse with women,” Theophanes the Chronicler (b. 758) adds:

[Muhammad said] that the women were not like the ones down here, but different ones, and that the intercourse was long-lasting and the pleasure continuous; and other things full of profligacy and stupidity.

Similarly, in a correspondence with a Muslim associate, Bishop Theodore Abu Qurra (b. 750), an Arab Christian, jibed: “Since you say that all those who die in the holy war [jihad] against the infidels go to heaven, you must thank the Romans for killing so many of your brethren.”

Perhaps the worst part of all this for Muslims is that, then and now, all Western criticisms of Muhammad were exclusively based on Muslim sources, particularly the prophet’s biography and the Koran. Or, to quote an eighth century Byzantine who possessed and studied a copy of Islam’s holy book, that “most pitiful and most inept little book of the Arab Muhammad … with all its ugly and vulgar filth,” including claims that heaven amounted to a “sexual brothel.”

In other words, Muslims can never disown the things written about and taught by Muhammad which non-Muslims find scandalous.

An interesting anecdote concerning a twelfth century debate between a Christian monk and a Muslim cleric is well representative of this ongoing phenomenon. As the former continued reciting the misdeeds of Muhammad, the Muslim accused him of “blasphemy” against “our Prophet Muhammad,” whom “you mock with insolence!” To this, the monk replied: “Upon my life, we do not bring anything from ourselves but from your Book and your Koran.”

This is the crux of the issue: Muslims believe they have a mission to spread Islam. But when those who are invited to Islam seriously examine the teachings and life of its founder, they respond with incredulity and outrage that anyone could accept Muhammad as a man of God — much less a prophet.

As non-Muslim criticism of Muhammad is based exclusively on authoritative Muslim writings — from the Koran to the hadith and sira — Muslims find that they have no way to respond except with frustration, rage, and violence.

This is the backstory of the historic jihad. As recounted in my Sword and Scimitar: Fourteen Centuries of War between Islam and the West, from the very first contact between Muslims and Europeans in the seventh century, rejecting or accepting Muhammad was the difference between war or peace.

As late as 1683, some 300,000 Muslims came and surrounded Vienna. Before laying siege to it, a messenger was sent promising the Viennese that they would not be molested if they but submit to Muhammad. Though the commander gave no response, graffiti found in the city — including “Muhammad, you dog, go home!” — seems to capture its mood.

But whereas centuries of brave Western men were able to defend their criticism and refusal of Muhammad, Asia Bibi — a lone Christian woman in a sea of Islam — cannot, as Muslims all around Pakistan continue screaming for this “blasphemer’s” death.