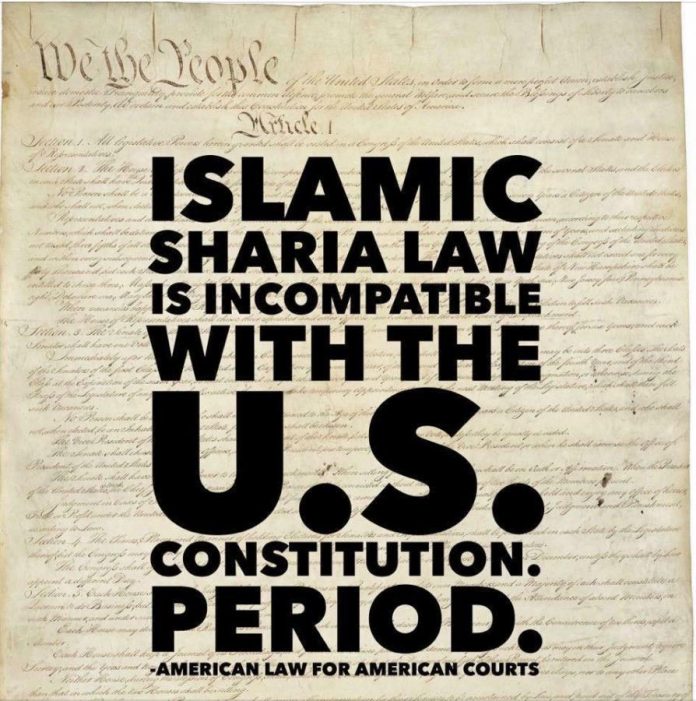 Wikipedia defines Islamophobia as the fear, hatred of or prejudice against the Islamic religion or Muslims, especially when seen as a geopolitical force or the source of terrorism. Yes, many people around the globe who identify with Islam are good, hard working, loving people. But that’s a separate issue from Islam itself.  Here are 10 questions about the compatibility of Islam in America. Depending on your answers, does that make you an Islamophobe?

10) Are Islam and Sharia Law compatible with American culture? The generally accepted values of modern America stress a wide range of freedoms involving speech, sexuality and life styles as well as equal rights for women, minorities and a long list of others.  None of this fits with the program of the Organization of Islamic Cooperation (OIC) that affirmed Sharia law as supreme, with the death penalty for those leaving Islam, punishing women who are victims of rape, allowing men to be polygamous, permitting wife beating and censoring speech that insults Islam.

9) Does Islam threaten to destroy our system of law and our Constitution?  Islam is not merely a religion. It is an entire societal and quasi-governmental structure with its own legal edifice called Sharia. The holy Qu’ran calls for subjugation of infidels or non-believers, if necessary, through armed jihad. Dr. Irwin Lutzer in his book “The Cross in the Shadow of the Crescent,” describes a Muslim demonstrator in Dearborn, Michigan, holding a sign stating: “We will use the freedoms of the Constitution to destroy the Constitution!” That’s the game plan. You see, Sharia law is in direct conflict with the Bill or Rights. The First Amendment, for instance, states Congress shall make no law prohibiting the “free exercise” of religion. Yet Mohammad said, “Whoever changes his Islamic religion, kill him. Those who reject Islam must be killed.” Islamic law enforces dhimmi status on non-Muslims, prohibiting them from observing their religious practices publicly, raising their voices during prayer, ringing church bells or saying anything considered “insulting to Islam.” Islamic law relegates non-Muslims to “dhimmi” status, where they are forbidden to propagate their customs among Muslims and cannot display a cross, Christmas decorations or the Star of David. There’s a lot more, but you get the idea.

8) Are Islam and Sharia Law tolerant of other religions?   Tolerance is a fundamental American value. That is the polar opposite of Islam. When Muslims are not in a position of authority, they naturally call for tolerance and cooperation. But one only has to look at Muslim societies to understand how far that goes. How many Christian churches are there in Saudi Arabia? Zero. Non-Muslims (infidels) are not permitted to visit Mecca? Christians are routinely attacked or murdered in Pakistan. More than 600 Christians have been arbitrarily arrested and detained in Iran in the past year.  Iranian authorities routinely raid church services, threaten church members and arrest and imprison worshipers and church leaders, particularly Evangelical Christian converts. Christian church leaders have been explicitly been targeted by the Iranian authorities charged with ‘unfounded national-security-related crimes.’

7) “When Muslims claim Islam is a religion of peace and love, are they lying to the non-Muslim world?”  Ask Hicham Nostik, a former Muslim who now lives in Germany. He understands the prophet Muhammad’s famous quote, ‘War is deceit.’  Lying is permitted to deceive an “enemy.”  The Qu’ran defines the ‘enemy’ as “disbelievers.”  There is no way to cover up the meaning of that.    In fact, apostates who leave Islam are subject to the death penalty. Apostasy is a crime in 16 out 49 Muslim majority countries; in other Muslim nations such as Morocco, apostasy is not legal but proselytizing towards Muslims is illegal. It is subject in some countries, such as Iran and Saudi Arabia, to the death penalty.

6) Has there ever been a period in history fully characterized by peaceful co-existence between Muslims and non-Muslims?  Apparently not, based on details in Robert Spencer’s new book, ‘The History of Jihad from Muhammad to ISIS” as well as Raymond Ibrahim’s “Sword and Scimitar: Fourteen centuries of war between Islam and the West,” Pamela Geller’s “Stop the Islamization of America: A Practical Guide to the Resistance” and similar books written by Jamie Glazov, David Horowitz, Brigitte Gabriel and Amil Imani.

5) Is Islam in the process of swallowing Europe? If any more proof of the danger of Islam to our society and culture is needed, look no further than the downward spiral of Europe. Growing problems caused by Muslims in France, Italy, Belgium, Holland, Germany, Sweden and Britain continue to be well documented. The Muslim takeover of Britain is so far along I fear only a bloody civil war could reverse the tide. Douglas Murray has spelled this out in detail in his book, The Strange Death of Europe. After 25 years of intense Muslim immigration, Islam features 3,000 mosques, 130 Sharia courts, 50 Muslim Sharia Councils and dozens of ‘no go zones’ where Moslem ‘Sharia’ patrols ensure no one disobeys Sharia Law. Britain has recently released from prison Anjem Choudary, described as the most dangerous Islamic preacher in the UK. Among other pronouncements, he says, “When Sharia law is implemented, maybe in 10 or 15 years’ time, (the Queen] would be expected like all women in Britain to be covered from head to toe, only revealing her face and hands.” Or how about this? “There will be no more pubs, no more gambling houses, no more national lottery. All women would have to be covered up appropriately and wear the niqab or veil and so there will be no prostitution. By 2050, Britain will be a majority Muslim country if demographic trends continue. It will be the end of freedom of democracy and submission to God. We don’t believe in democracy, as soon as they have authority, Muslims should implement Sharia. This is what we’re trying to teach people.” Is there anything about this you don’t understand? Could we get any Muslim leaders to denounce this? The Brits are afraid to.

“Immigrants devoted to their own cultures and religions are not influenced by the secular politically correct façade that dominates academia, news-media, entertainment, education, religious and political thinking today. They claim the right not to assimilate . . . Such immigrants say their traditions trump the U.S. legal system.”

“I hope that when we stand up to those who oppress our community struggling against tyrants and rulers that Allah will accept this as a form of jihad not only in the Middle East but here against the fascists, white supremacists and Islamophobes here and reigning in the White House.  Our top priority is to protect and defend our community and not to assimilate and please any other people or authority. Our top priority is to please Allah and only Allah.”

3) What is the record of radical Islamic killings since 9/11? The Religion of Peace website counts 34,034 Islamic terrorist attacks worldwide since September 11, 2001. Mosques financed by Saudi Arabia and Iran are primary sources of Jihadist activity. Israel has foiled at least 40 ISIS attacks in Western countries in just the last three years. Since 9/11, an additional 158 Americans have been killed in 53 separate acts of deadly Islamic terror or Islam-related honor killing in the United States.  Hundreds of mass murder plots have been thwarted or botched.  Between 5 – 25% of Muslims in America believe that violence in defense of Islam is justified.

2) Can there ever be a Muslim Martin Luther? Can Islam be reformed? A titular reform Islam movement in the US led by Zuhdi Jasser, a second-generation Syrian doctor who practices in Phoenix, says yes. But others do not believe that Islam is reformable.  Muslims have attempted to reform Islam for 1400 years and have always failed.  In Indonesia last month, a rally to promote moderate Islam was cancelled after threats of violence from hardliners. Leaders of such movements have been beheaded for apostasy. Jihad and Sharia are foundational principles of Islam. No mincing of words will change that. Lying, deception and terror as basic Islamic tools to maintain control provide a platform no reformer could possibly build on.

1) Does Islam belong in America? The companion question is, are Americans willing to take steps to neutralize the threat of Islam? In its current form, with the explicit goal of a global caliphate under Sharia, Islam must be regarded as an existential threat. Specific ways are needed to deal with an ideology that openly seeks to destroy Western Civilization. What could be done to deal with this threat? Before it is too late, consider these steps:

• Our political leaders should openly acknowledge the threat of traditional Islam to a pluralistic democracy and insist that Islamic institutions formally and in practice reject violent jihad as a condition for tax exempt status.

• Our schools should teach the violent history and core beliefs of Islam including the strict rules and requirements of Sharia law while contrasting that with the Constitution and the Bill of Rights.

• Muslim leaders who preach violence should be aggressively prosecuted for incitement.

• Congress should pass laws outlawing foreign financing of mosques or at a minimum require full reciprocity with Muslim countries granting complete religious freedom for Christian, Jewish or other groups to establish houses of worship and to openly proselytize their faiths.

•Conspiracy and accessory before- and after-the-fact laws targeting anyone, including family members of terrorists, failing to report illegal activities of which they had knowledge should be strictly enforced.   We can’t afford for America to become another Muslim-dominated nation.