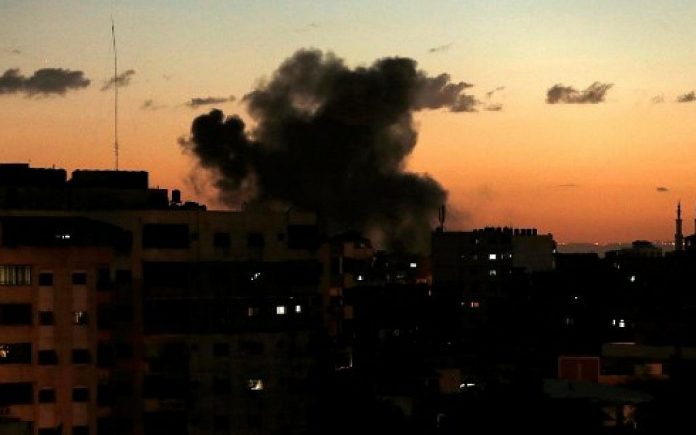 The Times of Israel is liveblogging Sunday’s events as they happen.

Hamas releases a photo of the alleged “civilian vehicle” used by Israeli special forces in Gaza.

The IDF says it is “totally fake.”

Netanyahu is cutting his Paris visit short and will return tonight instead of Monday morning, due to the intense Gaza violence, officials in his office say.

The Hamas-run health ministry in Gaza identifies the casualties in the exchange of fire that followed the assassination of senior Hamas commander Nour Baraka as: Nouriddin Salama, 37, Mohammad al-Qarra, 23, Alaa Qweeder, 22, Mustafa abu-Odeh, 21, and Mahmoud Musabbeh, 25.

Hamas’s military wing confirms the assassination of commander Qassam Brigades Nour Barakah by Israeli special forces, who had been driving a “civilian vehicle” three kilometers from the Gaza border.

The Israeli squad became exposed after taking out Barakah and was forced to retreat back to the other side of the fence under the cover of aerial bombardment, the statement from the military wing says.

Which led to the martyrdom of a number of our people, and the event continues and our forces are dealing with this dangerous Zionist aggression.

Hamas says elite Israeli soldiers crossed the border into Gaza in a civilian car in a special operation to assassinate a terror group commander.

According to the terror group’s account, the Israeli unit was unmasked, prompting air forces to come to its aid and extract the troops from the territory.

The Israeli army has yet to publicly give a detailed account of what prompted the violence clash, but said all of the Israeli soldiers are “back in Israel.”

“IDF operated in the Gaza Strip, exchange of gunfire ensued. All IDF soldiers back in Israel. Several alarms have sounded in Southern Israel. More to follow,” says spokesman Jonathan Conricus.

Quick recap so far: IDF operated in the Gaza Strip, exchange of gunfire ensued. All IDF soldiers back in Israel. Several alarms have sounded in Southern Israel. More to follow.

Two projectiles have been fired at southern Israel from the Gaza Strip, both of which were intercepted by the Iron Dome air defense system, the army says.

The Israeli military orders that schools be closed in the communities surrounding the Gaza Strip tomorrow in light of ongoing clashes in the Palestinian enclave.

Israelis in the border communities will also only be allowed to go to work if they have ready access to a bomb shelter.

The number of people allowed to gather indoors is also limited to 300.

In addition, farmers will not be allowed to work in their fields near the border, the army says.

With Netanyahu abroad, Regev and Liberman left in charge

With Prime Minister Benjamin Netanyahu out of the country, Culture Minister Miri Regev is the acting premier.

Defense Minister Avigdor Liberman, however, is in charge of convening the high-level security cabinet, of which Regev is not a member.

Rocket sirens are continuing to sound in the areas surrounding Gaza.

School is canceled on Monday in the Gaza periphery.

It is not immediately clear if rockets have fallen in Israeli territory.

The meeting lasts about an hour.

His office has not yet said whether the prime misntier plans to cut his trip short.

He is currently scheduled to meet with French President Emanuel Macron tomorrow at 10 a.m. local time, before rerunning to Israel.

The Israeli military dispels a rumor that a soldier had been kidnapped during an IDF operation in the Gaza Strip.

“During the security event in the Gaza Strip, there were no kidnappings of our forces,” the army says.

The Gaza Strip’s Hamas-run health ministry updates the number of people killed in clashes with the IDF to five, including a battalion commander in the terror group’s military wing.

Seven other people are said wounded in gunfights with Israeli troops and raids by Israeli aircraft.

More rocket sirens blare in southern Israel’s Eshkol region, amid clashes between the Israeli military and the Hamas terror group in Gaza.

There are no immediate reports of injuries or damage.

The Israeli airstrikes in Gaza are a response to an incident that occurred within the Strip, when IDF special forces encountered an ambush, according to Hebrew media reports.

There were no immediate reports of Israeli injuries.

With PM abroad, PMO unable to say who is in charge of calling security cabinet

The Prime Minister’s Office is not immediately able to say which government minister has been appointed in charge of calling a security cabinet meeting, with Prime Minister Benjamin Netanyahu currently abroad.

Since coming to power in 2009, Netanyahu has never named a permanent designated replacement, who would automatically take over leadership of the country if he were unexpectedly indisposed or removed from office by impeachment.

Instead, each time he travels abroad, Netanyahu names a different senior Likud minister as his temporary stand-in. Sometimes, that minister is not a member of the Security Cabinet — which is tasked with outlining and implementing foreign and defense policy — and another minister is therefore tasked with calling that forum if needed.

The IDF confirms that rocket sirens have been sounded in the Eshkol region bordering the Gaza Strip.

It says it is investigating the cause of the sirens.

Palestinian media is reporting that at least four people were killed in Israeli airstrikes on the Gaza Strip.

At least one of those reported dead is said to be a senior Hamas military commander.

Rocket sirens sound in southern Israel, sending thousands of Israelis to bomb shelters, amid clashes between Israel and the Hamas terror group.

The alarms are heard in the Eshkol region, east of southern Gaza.

There are no immediate reports of injuries or damage.

Residents of communities that border the Gaza Strip and several other towns in Israel’s south have been ordered to stay indoors by the IDF’s Homefront Command, amid reported Israeli airstrikes on Hamas targets.

Israeli drones bombed a number of targets near the city of Khan Younis in the southern Gaza Strip on Sunday night, killing two people, including a senior Hamas commander, according to Palestinian media reports.

Residents of southern Israel are instructed to remain close to bomb shelters or other protected spaces following reports of clashes between the IDF and the Hamas terror group in the Gaza Strip.

“In accordance with army instructions: You should remain close to a protected space, or the most protected space possible,” residents of the Eshkol region of southern Israel are told in a text message.

The Eshkol region has been one of the hardest hit areas in the sporadic rocket and mortar attacks by Hamas and other terror groups in the Strip in recent months.

The nature of the strikes is not immediately known.

The air raids are said to target sites near the Gaza city of Khan Younis.

The Israeli military refuses to comment on the reports.

The Israel Police defend their probe into alleged corruption in the purchase of naval vessels after a former defense minister implies they sought to prevent publication of details in the case.

Prime Minister Benjamin Netanyahu, who is not a suspect in the case, has come under fire in recent days, from opposition figures who have questioned his assertion he was not aware of alleged criminality by a number of his close associates.

“We wish to clarify that the investigation was conducted in a thorough and professional manner with the sole purpose of clarifying the truth. The claims that Case 3000 was limited or narrowed by any senior law enforcement officials is a false claim, without any factual basis,” police say in a statement.

The statement comes shortly after former defense minister Moshe Ya’alon, who has accused Netanyahu of corruption in relation to the case, wrote a letter to Attorney General Avichai Mandeblit questioning the thoroughness of the investigation.

“The manner in which the investigation was conducted raises tough questions for me of a deliberate effort not to uncover the truth in this affair, which deals with the holy of holies of the state’s security,” Ya’alon writes.

Prime Minister Benjamin Netanyahu told the security cabinet that the crisis in ties with Russia following the downing of a Russian jet by Syrian anti-aircraft missiles during an Israeli strike is worse than initially believed, Hadashot TV news reports.

“The crisis with Putin is far worse than we thought,” the network quotes Netanyahu saying following his trip to Bulgaria last week.

Russia has blamed Israel for the downing of the plane, a charge denied by Jerusalem, and, in recent weeks, has ramped up its criticism of Israeli airstrikes in Syria.

“Putin sees the downing of the plane as a personal affront to his prestige and this is an important component in his perception of power,” Netanyahu reportedly said.

“Therefore, this is a strategic blow that made the crisis worse,” he is said to have added.