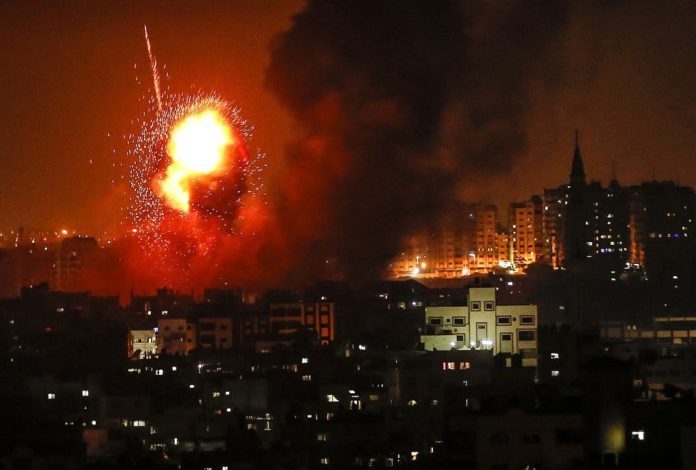 Rebecca Ratcliffe’s article in the Guardian, (Women in Paradise face violence and political exclusion, campaigner tells UN, Oct. 26), concerned Randa Siniora, director of the Women’s Centre for Legal Aid and Counseling, and her recent address to the UN Security Council.  Siniora presented multi-faceted accusations against Israel, with scant background or context.  She referred to Israel as an occupying power despite the UN’s declaration of Israel’s sovereignty as a state in 1948 over territory that had been Jewish-occupied for 3,000+ years, and never ruled or developed by Muslims.  The brief “occupation” of Gaza by Israel, won in a defensive battle against five attacking Islamic armies, was voluntarily relinquished in 2005; Gaza has since been ruled by the Palestinian Authority and Hamas, a terrorist organization.  Siniora’s address represents Islam’s perpetual jihad.  To Islam, the entire world falls into two kinds of “houses” – The House of Peace, Dar al-Islam, the land that Islam as already conquered, and the House of War or Chaos, Dar al-Harb, literally the rest of the world that is targeted for conquest for Allah (8:40).  There are no other designations.

Siniora shamelessly provided partial stories in an effort to elicit a biased response.  She spoke of women being chased from their homes, but neglected to explain whether the homes were legitimately built on land zoned for such construction, in keeping with Israel’s laws (and particularly because of Israel’s size), or if the homes belonged to the families of Palestinian terrorists who had harmed or killed Israeli citizens.  Or they may have been the families of the young men who were responsible for the incendiary balloons and kites that destroyed seven square miles of agricultural land, forestry, nature reserves, livestock, people’s homes and livelihoods, and causing respiratory illnesses.  She chooses to not acknowledge these deadly activities or the bombed school buses, bus stations and restaurants; the terror tunnels that lead to schools and villages for the sole purpose of murder or kidnapping.  (At this writing, the Palestinians fired 400+ rockets today alone into Israel.)  The confiscation of their families’ homes as a consequence of these actions is a very light penalty, indeed.

On the inflated claim of a “humanitarian crisis,” she was also seeking additional funding for UNRWA, which was established in 1949 to support the 700,000 Arab refugees who fled the Arab armies’ attack against Israel, but which offered no safe haven to their brethren; the funds were never extended to the more than 850,000 Jews who fled Arab and Muslim persecution around the same time.  It is time to reduce the aid due to its “endless and exponentially expanding community of entitled beneficiaries,” the Palestinian rejection of Israel’s sovereignty and Jerusalem as its capital, their constant animus toward the United States, and because much of the subsidy is funneled through the UNRWA to support terrorism.  By allowing them to appropriate our humanitarian funds for killing, we have become their accomplices.

Her bemoaned “humanitarian crisis” is, in point of fact, a result of the harshness with which women have been treated by men since the time of Mohammed, and continues to this day.  In the Islamic ideology, men are given complete authority over women, where beatings are acceptable (4:34); their lives lived in stark contrast to the “paradise” quoted in the article’s title.  Domestic violence is undeniably rampant in the Arab community and the male’s foremost whipping boy is usually the female, his property – his wife, who must assume the blame for the faults and incompetence of others.  Would not this situation of homegrown cruelty be more closely examined and perhaps eased if the truth were exposed to the UN?  However,  like Linda Sarsour, Siniora is a jihada who uses lies (taqiyyah) to hide the truths of Islam and protect the violent ideology that perpetuates it, whether out of fear of repercussion or out of a desire to be accepted in the greater jihadi community.

Why does the woman who has achieved stature and access to the nations of the world not expose and speak out against the barbaric, sadistic FGM (Female Genital Mutilation) that UNICEF estimates has disfigured 200 million women in 30 countries?  Why do Siniora and her peers not rally against the burqas that restrict, confine, and isolate, but are also used to spotlight the non-Muslim women as fair game for rape or acid attack?  Why does she not work against the woman’s subservient status of one-half to one-quarter of the man’s value in their court system?  Why does she not try to save the children from terror training so that they won’t grow up to be the next generation of hate-filled, sadistic, controlling husbands who live to dominate the women and kill non-Muslims, particularly Israeli Jews?  Arab women’s subjection comes from the Koran and women like Siniora and Sarsour, who might be in a position to improve their lot, instead lend assistance to the injustice.  If either has gained access to the UN, why doesn’t she use this opportunity to speak out for Muslim women and insist on working toward equalization?   Sadly, they are jihadas, who clearly prefer the platform of propaganda and the tawdry glory of being temporarily raised from the diminished female status of the Muslim woman.

In spite of their public announcements, since polls were first taken in 1996, Israeli Palestinians, 20 percent of the population, have consistently rated Israel’s democracy as the one they most admire in the world.  This is not surprising, since all Arab municipalities receive government funding for education and infrastructure.  Israel has enacted affirmative action policies to help its minority citizens achieve full social and economic equality. Within Israel, there is legal protection against religious discrimination and hate crimes and Israel is the only Middle Eastern country where the Christian population is thriving instead of disappearing as they do under Islam.

Siniora claims the Arabs in Gaza are experiencing an increase in male violence due to Israel’s “occupation,” although that ended in 2005.  Of course, she is  antagonistically claiming the whole sovereign State of Israel as “occupation,” an attitude that nourishes the Arab hostility toward the Jews (9:30) (4:89).  She alleges that when Jews counterattack, the Arab men increase their violence toward their wives and children.  How is it, then, that when Arabs attack Israelis, the Israeli men only devise more methods of defense and build new shelters for their families’ protection?

Are we to believe that Arab men are peaceful when Israel is a non-factor?  On  11/11, a woman was hacked to death with a machete by ADF, and her five children kidnapped in the Democratic Republic of Congo.  On 11/10, six civilians were killed by Islamist shrapnel in Syria, and an official was killed by Taliban bombers in Afghanistan.  On 11/9, a man was killed by a motorcycle bomb blast in Pakistan; four family members were killed by a shell to their house in Yemen; a man praised Allah while attacking a group of police with an axe in Indonesia; a man tried to blow up hundreds of worshippers in a church but succeeded in slashing the priest with an ax in Indonesia; three Somalian suicide bombers killed 40 at a Somalian hotel and stabbed passersby while praising Allah; armed fundamentalists killed 17 local security personnel in two attacks in Afghanistan.  During the month of October, there were 158 Islamic attacks in 20 countries, 801 people killed and 712 injured.  Are these the behaviors of an otherwise nonviolent people?

It is obvious that Siniora thus addressed the UN in order to deflect from the shame of her culture and to delegitimize Israel’s sovereignty. The philosophy of Islam is the life of Mohammed and his savagery.  A seriously flawed individual, frustrated by his lack of success, he turned to violence to achieve his ends and his world-ambitious followers continue his bloody legacy into the modern age.

If there is to be improvement for the Arabs in the West Bank and Gaza, they must assume full responsibility for removing the ills from their society, stop the blame/shame ideology, and begin to create a government that allows them to flourish.  I recommend the Constitution of the United States as a guide.