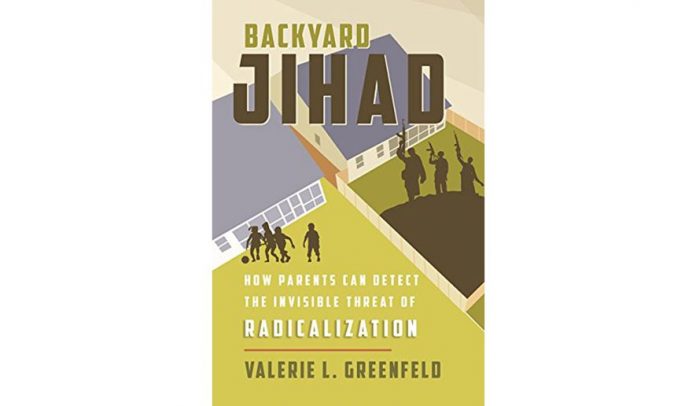 “The best defense is grassroots education,” concludes Valerie L.  Greenfeld concerning domestic jihadist dangers in her new book Backyard Jihad: How Parents Can Detect the Invisible Threat of Radicalization. Her primer for Main Street communities contending with Muslims dreaming dangerous dreams of establishing Islamic states in the West raises important issues for the citizens of the free world in America and beyond who are seeking a first line of civil defense against sharia supremacism.

Greenfield’s book dismisses myths about jihadist terrorism involving disadvantaged individuals turning to violence out of despair. “Contrary to some media reports, those joining terrorist organizations in the U. S. rarely do so as a result of poverty or lack of education, dignity, or occupation,” she writes. “Why leave the U.S. after being fortunate enough to enter the freedom of America?” she perceptively notes of individuals in Islamic immigrant communities who leave America’s Promised Land for jihad in foreign hellholes.

Greenfeld draws upon a 2007 New York City Police Department (NYPD) study to show that recruits to jihad seek to fulfill various longings of the heart. “The prospective recruits are struggling with frustration, anger, loneliness, or disagreement,” she notes. “Finding a new identity or ideology fulfills the need to feel important and included.”

Jihadist recruiters’ techniques are “not unlike telemarketers,” notes Greenfeld. Her telephone interview with German Institute on Radicalization and De-radicalization Studies Director Daniel Koehler is particularly telling. The “enemy is a sophisticated, psychologically trained jihadi recruiter with huge networks and large coffers of money,” he has explained.

Greenfeld cites the book Son of Hamas by former Hamas terrorist Mosab Hassan Yousef to emphasize the particular Islamic doctrines that can lead to jihadist violence. “Most suicide bombers began as moderates,” Yousef has written, because “Islamic life is like a ladder, with prayer and praising Allah as the bottom rung,” while the “highest rung is jihad.” Accordingly, “American Muslims are more susceptible to radical messaging than non-Muslims,” Greenfield concludes from the NYPD study.

Greenfeld examines how jihadists translate theology into violent action on the basis of a 2009 recruitment manual. “Create vulnerability and isolate them. Talk about heaven and hell,” she explains is the manual’s recommended strategy for recruiters seeking to enlist prospective martyrs. Radicalization “normally happens to those who fear the torment of the afterlife and who come to know that jihad is the salvation from eternal damnation. The result is that jihad is desired and craved,” the manual argues.

Greenfeld analyzes the jihad doctrine’s potential for creating theological ticking time bombs that are often impervious to subsequent defusing through ideological reeducation. “It is uncertain if or when a non-jihadist Muslim will suddenly decide to act on their jihadi fantasies,” she writes. Meanwhile, as numerous de-radicalization failures indicate, Representative Peter King in a conversation with her “didn’t confirm that a feasible, effective program exists that can de-radicalize or rehabilitate terrorists.”

Along with individual acts of jihadist terrorism, Greenfeld warns of a “stealth jihad, an invisible threat of radicalization” presented by those Muslims who have little desire to assimilate into Western societies. “Immigration and procreation are the two most potent waves of invisible recruiting and cultural jihad,” given that orthodox “Islam is not only a religion, it is a way of life, social, political, intellectual, physical.” Therefore, often Islamic proselytization or “da’wa is an invitation to deceive,” such as with claims that Islam in Arabic means peace, when actually the “word Islam means submission.”

Greenfeld examines issues presented by various American Muslim communities, such as the Detroit suburb of “Hamtramck, Michigan, America’s first and only majority Muslim city.” “Five times each day the minaret sounds beginning at 6:00 a.m.” from a local mosque, one fact among others that means that “[s]ome residents are not sure if they are living in Michigan or somewhere in the Arabian desert.” “There is a certain resentment by the original residents, as their lifestyle is pushed aside for the import of a large number of immigrants who don’t intend to blend into the culture that was there before,” she writes.

A Greenfeld reunion in her hometown of Minneapolis, Minnesota, prompts interesting immigration policy observations about the influx of Somalis that has formed North America’s largest Somali community. “From the desert heat of Somalia to the cold tundra of 10,000 lakes, why would Somalis choose to live in Minnesota?” she wonders about this Muslim community that has become a source of jihadists in the land of Lake Wobegon. That “Minnesota spends more money per low-income individual on public welfare than any other state” is one significant factor.

Greenfeld notes that “media reporting is not always accurate and usually has a political goal,” something that only abets subversive jihadist influences such as the Dar al-Hijrah Mosque in northern Virginia’s “Wahhabi Corridor.” This mosque has numerous terrorism ties, “yet the evidence is not enough to convince politicians representing Virginia’s citizens to close the place down,” she states. In fairness to these lawmakers, it is precisely America’s freedoms that limit the legal possibilities to “close down” groups no matter how extreme, whether promoting jihad or white supremacy. By contrast, she reviews the record of former University of South Florida Professor Sami Al-Arian, ultimately convicted of material support for terrorism. “How do you feel about paying tuition for this guy to teach?” she asks.

Facing such enemies among us, Greenfeld’s homeland security strategy rightly prioritizes civil society taking on the challenge of jihadist ideology. “The extreme ideology must be addressed. While after-school teen programs are nice — they will not solve the problem,” she writes. This includes ever-elusive Islamic reform; thus “tolerance and respect for non-sharia Muslims is imperative — they lead the way to reformation” that “must come from the inside the moderate Muslim community.”

Greenfeld’s book provides a salutary reminder that, as with past totalitarian challenges, victory begins with a battle of ideas that instructs Americans why we fight. This ideological struggle requires a grassroots, Tea Party-like movement that understands lessons such as the fact that “[m]orals and values are best taught with family at the dinner table.” The “power in the United States is not in Washington, D.C., but in homes and neighborhoods around the country. We must return to American values, history and heritage and empower our children to protect our nation.”