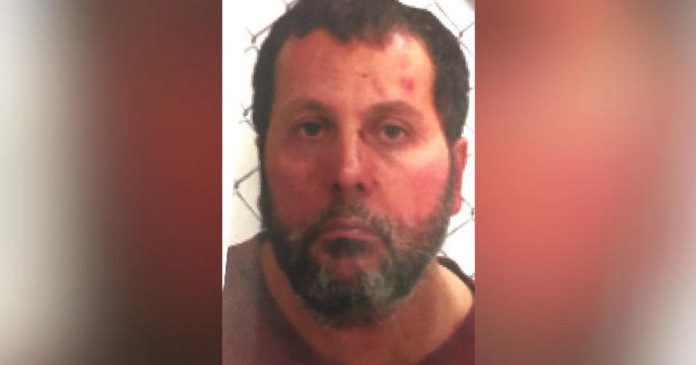 A jury in Flint, Michigan needed only an hour to convict a devout jihadi of terrorism for his June 21, 2017 attack at Flint’s Bishop Airport.  It took not much longer than that for the media to lose interest in the story.

Tunisian-Canadian Amor Ftouhi was found guilty November 13 on three federal charges, including commission of an act of terrorism transcending national boundaries.  Ftouhi emerged from an airport rest room yelling “Allahu Akbar!” just before slashing through airport police Lt. Jeffrey Neville’s neck with a 12-inch serrated knife, nearly killing him.  It was his plan to kill Neville, take his gun and start shooting people until he himself was killed.  Ftouhi was subdued with difficulty by a maintenance worker, another policeman, and the badly wounded Neville.  Ftouhi continued to yell “Allah” several times after the attack.  Following his arrest Ftouhi described himself as a “soldier of Allah” who embraced the ideology of Al-Qaeda and Usama bin Laden.  When Ftouhi learned during FBI interrogation that Neville was still alive, he “put his head down and was crying” at his failure to complete his mission to kill.  According to trial testimony, Ftouhi was so distraught he repeatedly asked his FBI interrogator to shoot him.

Ftouhi’s court-appointed lawyers made no opening statement at trial, and put on no defense case.   Attorney Joan Morgan told the jury in her closing argument that her client was unstable and depressed about being in debt and unemployed, and came to the U.S. “to commit suicide by cop because it would be easier in the U.S. than in Canada.”   Ftouhi, Morgan said, “was a person who was absolutely looking for a way out.”

But Assistant U.S. Prosecutor Cathleen Corken brushed away that argument: “If Ftouhi’s only intention was to be killed by a cop,” she told the jury, “he could’ve found one in Canada.”  (Yes, even in liberal Quebec the cops will probably shoot you if you try to take off one of their heads with a Rambo knife.)

But instead of looking for a way out, Ftouhi was looking for a way in – to heaven.  Canadian investigators found his will when they searched his apartment.  While he did express shame about his debts, he also said, “Let all my family and my brothers know that I did not go out [to do jihad], save for God and for the victory of His religion and His rules, hoping that God grant me the eternal heaven and paradise.”  “This is what a Muslim is born for,” he told his wife; “he had loved her for 20 years, but ‘[m]y love for God Almighty and the jihad for his sake is greater.'”  He chose June 21st for his attack because it’s the “night of power – during Muslim’s holy month of Ramadan…believed to be when the first verses of the Koran were brought to the Prophet Mohammad.”   Ftouhi believed if he did his jihad on that date “he would be more successful in his mission and have a better chance to get to heaven.”

Exactly.  But the consistent reappearance of this motivation behind attacks around the world is the one uncontroversial fact about Islam that Muslim spokesmen in the West – and their non-Muslim champions in progressive media, churches, and politics – keep demanding that we all have to deny.   On the day of the attack Osama Siblani — the Dearborn, Michigan founder of the Arab-American News, as well as being an outspoken supporter of Hezbollah, and a prominent go-to liar on things Islamic for the local press —  expressed to news reporter Taryn Asher his frustration “with terror attacks always being connected to the Islamic faith.”  Lying through his teeth, Siblani said that “a devout Muslim does not kill,” hoping to divert attention from yet one more manifestly devout Muslim expressing his fervent devotion to Allah through a mission “to kill and be killed.”  Even reporter Asher wasn’t convinced, leaving unanswered her own question: “why the Muslim religion appears at least in some cases…to be the motivation.”

But if we’d just listen to what they tell us, jihadis who fail to achieve martyrdom and get arrested tell us very clearly what their reasons are.  Ft. Hood shooter Major Nidal Hasan, like Ftouhi, also yelled “Allahu Akbar” before gunning down 13 people.  He called himself a “Soldier of Allah” on his business cards, and he told a military court “that he was out to protect the leader of the Taliban and what he called the ‘Islamic Emirate of Afghanistan.'”  Still, the Army refused to call it terrorism and President Obama described Hasan’s actions as “workplace violence.”  For years the liberal press have scratched their heads over Hasan’s motives – anything but admit it was Islam-inspired jihad.

According to prosecutors, the surviving brother of the two jihadis who unleashed the Boston Marathon bombing, Dzhokhar Tsarnaev, “scrawled the motive for the attack inside the boat [where he hid from police].  They say he referred to US wars in Muslim countries and wrote, among other things, ‘Stop killing our innocent people and we will stop.'”

Like Ftouhi, Umar Farouk Abdulmutallab, aka the Underwear Bomber, also targeted Michigan for mass murder by trying to blow up an airliner over metropolitan Detroit, and could not have been clearer at his plea hearing regarding why:

In late 2009, in fulfillment of a religious obligation, I decided to participate in jihad against the United States. The Koran obliges every able Muslim to participate in jihad and fight in the way of Allah, those who fight you, and kill them wherever you find them, some parts of the Koran say, an eye for an eye, a tooth for a tooth…Participation in jihad against the United States is considered among the most virtuous of deeds in Islam and is highly encouraged in the Koran[.]

At his sentencing hearing three years later Abdulmutallab said, “The mujahedeen are proud to kill in the name of God, and that is exactly what God told us to do in the Koran.”  And his closing words to the court?:  “Allahu Akbar.”

The day I’m writing this, a man wielding two kitchen knives shouted “Allahu Akbar” before he stabbed a police officer in the neck in the center of Brussels.   The police spokeswoman “said it was too early to make any statements on whether the attack was terror-related or the allegations the man had shouted ‘Allah Akbar’, which means ‘God is Great’.”

How about if, when a guy yells “Allahu Akbar” immediately before slaughtering or attempting to slaughter people, we could just stop asking if it’s “terror-related” and start asking if it’s Islam-related, instead?  The motive driving these attacks is what a jihadi devoutly believes, not that he’s met with ISIS leaders in Syria or is friends with Zawahiri on Facebook.   It’s not a jihadi’s relationship with al-Qaeda or any other international terrorist organization that matters: it’s his relationship with Allah – they’re telling us they get their orders to kill from the Koran.

You probably don’t believe people get into heaven by killing and being killed — but jihadis believe it, and despite liars like Osama Siblani, their devoutness is beyond question.  And they’re the ones holding the knife.

T.R. Clancy looks at the world from Dearborn, Michigan.  You can email him at trclancy@yahoo.com