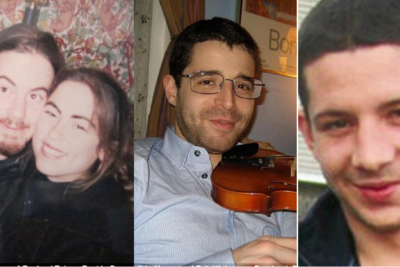 Newly released documents show the Boston jihad bombers had admitted to “committing jihad” slaughter previous to their Marathon bombing. Why was this under seal? Why are murderous Muslims protected and shielded?

The savage 2011 murders unfolded on a quiet dead-end street on a balmy night.

Mess and his friends, Erik Weissman, 31, and Raphael Teken, 37, had ordered dinner from Gerry’s Italian Kitchen at 8:54 p.m., but when a delivery woman arrived twenty minutes later there was no answer at the door and no one answered a call to Weissman’s cell phone, from which the order was placed.

The bodies were discovered the next day. Former Middlesex District Attorney Gerry Leone said at the time that the murders were “graphic.” Other investigators called it perplexing. (ABC News)

Only a handful of us covered and reported on the unsolved triple murder of three young Jewish men (two devout) on September 11, 2011, the tenth anniversary of jihadi attack on American soil. When I first heard that the older jihad bomber, Tamerlan, knew him, it sickened me. The media called one of these Jewish victims the “bomber’s only American friend.” I knew better. Beheading Jews on on September 11 had to be devout Muslims. Islamic Jew-hatred — it’s in the quran. Under Islam, slaughtering Jews is the most “righteous” of all kuffar murder: “I killed my Jew!”

If police had been trained properly, they would have solved this triple murder and saved the lives of the victims of Boston Marathon bombing. But powerful terror-tied groups such as CAIR worked with Democrats led by Obama to dismantle counterterror programs and scrub Islam and jihad from all training material. Court documents just unsealed from the trial of Boston Marathon bomber Dzhokhar Tsarnaev revealed that Tsarnaev allegedly told a college classmate that his brother Tamerlan “had committed jihad” through his involvement in a previous triple murder.

The case involved the murders of Raphael Teken, 37, Erik Weissman, 31, and Tamerlan’s friend Brendan Mess, 25 on Sept. 11, 2011. According to federal prosecutors, the three “were bound, their throats were cut, and at least one of them had marijuana sprinkled over his body.”

Recently unsealed court documents revealed that Dzhokhar’s college roommate Dias Kadyrbayev, 24, told his lawyer that Dzhokhar had told him that Tamerlan was involved in the murders, which Dzhokhar referred to as “jihad.”

Kadyrbayev was charged with obstruction for removing a backpack, laptop, fireworks and other incriminating items from Dzhokhar’s dorm room at the University of Massachusetts Dartmouth after the bombings.

Kadyrbayev offered to testify against Dzhokhar in exchange for leniency. Dzhokhar’s lawyers wanted the jurors to hear Kadyrbayev’s testimony as part of their strategy to paint Tamerlan as the driving force behind the bombings. However, the testimony was nixed from the trial after prosecutors objected and the judge agreed.

Tamerlan and Dzhokhar planted the bombs that killed three and injured several hundred people in 2013 at the Boston Marathon.

Tamerlan was killed in an ensuing firefight with police and Dzhokhar was captured. Dzhokhar was sentenced to death in 2015 after being found guilty on 30 counts that were brought against him.

The deadline for his first appeal to overturn that death sentence is December 19.

Investigators recovered all the items Kadyrbayev removed except for the laptop from a landfill in New Bedford. Kadyrbayev ended up pleading guilty to obstruction charges and was sentenced to six years in prison. He was released in August and deported to Kazakhstan.

The triple murder case remains officially unsolved even though Tamarlan’s friend, Ibragim Todashev, confessed to the FBI that he was also involved with the murders. Todashev was shot and killed by the FBI agent who was questioning him after he charged the agent with a five-foot pole