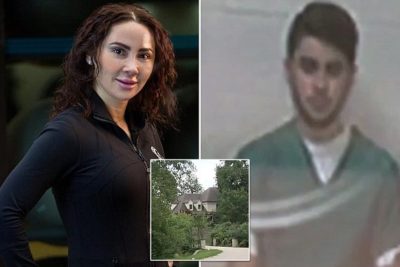 When it comes to sharia crime, the wheels of justice don’t just grind slowly, they don’t grind at all. Last week, the Muslim “doctors” who were indicted for performing clitoris mutilation (FGM) were released.

The scheduled trial of a Farmington Hills teen charged with murdering his mother has been postponed as defense attorneys appeal a judge’s ruling against suppressing evidence in the case.

Attorneys for Muhammad Al-Tantawi, 17, say video captured by a security system outside the home was obtained by police without proper consent. They also claim that the teen wasn’t properly Mirandized before talking to authorities at his home after his mother, Nada Huranieh, was found dead on Aug. 21, 2017.

Prosecutors believe Al-Tantawi killed her and then, as reportedly seen in shadows on the video, pushed her body out a second story window. Police maintain they rightfully confiscated the recording from the home after Bassel Altantawi, Huranieh’s estranged husband and Muhammad Al-Tantawi’s father, gave verbal consent for them to remove it.

A hearing was recently held before Judge Martha Anderson in Oakland County Circuit Court as defense attorneys sought to suppress the video and statements by Al-Tantawi as evidence in the case. That was denied by Anderson, but she agreed to adjourn the trial that had been scheduled for Dec. 3 while Al-Tantawi’s attorneys take the issue to the Michigan Court of Appeals.

Al-Tantawi is charged with first-degree premeditated murder, punishable by up to life in prison. He’s being held in Oakland County Children’s Village.

Authorities say the teen tried to pass off Huranieh’s death as an accidental fall that occurred while she was cleaning windows, staging a scene with a ladder and cleaning supplies.

Some believe the killing occurred because Huranieh was embracing aspects of the American culture which conflicts with the family’s Muslim faith.

Huranieh, who also had two daughters, worked as a personal trainer at the Franklin Racquet Club. She was in the process of divorcing Bassel Altantawi, who she married in Syria in 1999. Bassel Altantawi has a felony conviction for health care fraud and was not living in the family’s home — and was nowhere near it — at the time of Huranieh’s death, based on information from a court-ordered tether he was wearing, according to investigators.