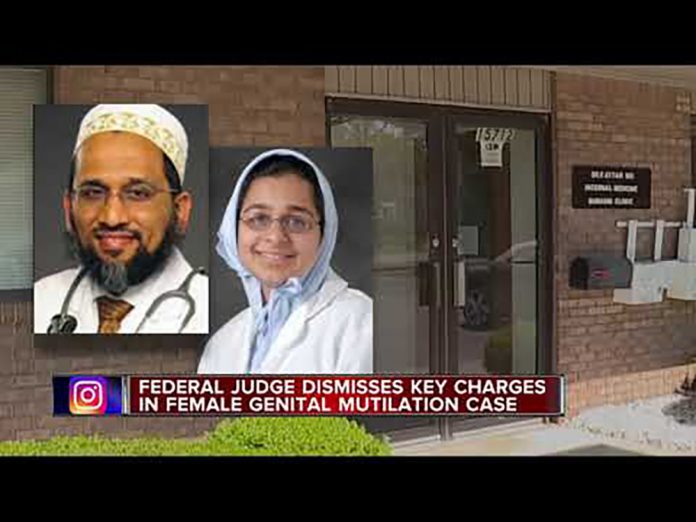 A federal judge has thrown out the federal female genital mutilation statute and dismissed the key charges in the Detroit FGM case.

I first told you about this case last year.  At that time, the Muslims charged in the case were raising a religious liberty defense, arguing that they had acted within their constitutional rights on the facts presented.  But the focus changed to the Commerce Clause and the judge ruled that FGM is a local criminal activity within the purview of local authorities and beyond the reach of Congress to regulate.

The Commerce Clause is in Article 1, Section 8 of the U.S. Constitution.  It’s what gives Congress the power to regulate commerce among the several states.  You may recall that Chief Justice John Roberts found that Obamacare violated the Commerce Clause before doing judicial backflips and upheld it as a tax.

The Detroit case was the first prosecution under the 22 year-old federal FGM statute. Prosecutors claimed that as many as 100 girls from Michigan, Illinois, and Minnesota had been cut.  The defendants argued that FGM has nothing to do with commerce, that “mutilation is not an economic activity.”  The government argued that children were transported across state lines and that the procedures were arranged with the use of cellphones, and involved medical tools and drugs sold in interstate commerce.  They further argued that a healthcare service is a commercial service. The judge knocked down the FGM statute as unconstitutional and dismissed most of the charges against the two Michigan doctors.

In his opinion, the judge wrote that FGM may be a “despicable” practice, but it’s up to the states to regulate it.  He recounted a long history of cases saying the federal government can’t touch purely local crimes. He said there was nothing commercial about FGM.  It’s just an assault and, like rape, has no effect on interstate commerce.  He relied on a precedent knocking down part of the Violence Against Women Act on the grounds that sexual assault has no effect on interstate commerce.  He pointed out that, in the Detroit case, there was “no suggestion the procedure was done for money.”  If there was evidence in the record that money changed hands, it was not reported in the stories I read.

The U.S. Attorney’s office hasn’t decided yet whether or not to appeal.  Serious conspiracy and obstruction charges remain and are set for trial in August 2019, although there is now a motion to dismiss a conspiracy charge.  There is a state FGM statute in Michigan, but the defendants in the Detroit case can’t be charged under it because it was passed after the federal case arose.  You can’t charge people retroactively; that would be an ex post facto prosecution and unconstitutional under Due Process and Article 1, Section 9 of the U.S. Constitution.

You might recall a Commerce Clause case from the New Deal era, Wickard v. Filburn.  The wheat in that case was consumed locally on the farm where it was grown and never crossed state lines.  But the price stabilization statute was upheld because the farmer’s actions were deemed to have an effect on wheat prices elsewhere, so there was an effect on interstate commerce.  We have, in the Detroit case, people who did cross state lines, but the statute was knocked down.  If this doesn’t make any sense to you, welcome to the wacky world of constitutional jurisprudence.

There were other problems with the judge’s opinion.  There is a distinction in the law between a facial challenge to a statute and a challenge to the statute as it is applied in a particular case.  A successful facial challenge means there is no set of facts imaginable under which a law could be constitutional.  A successful ‘as applied’ challenge means that the law is unconstitutional on the facts presented, but there might be other facts where application of the law would be constitutional.  In the Detroit case, the judge said that FGM is not an economic activity or healthcare service.  But what about potential cases in the 23 states that don’t have their own FGM statute making such cutting illegal and there is evidence in the record that money changed hands?  Under those facts, there would be no local crime and the commercial nature of people crossing state lines to consume a healthcare service would be undeniable.  Voilà! – the effect on interstate commerce the judge said was lacking in the Detroit case justifying Congressional regulation and the federal statute.

The judge did not limit his ruling to the way the statute was applied. Instead, this judge went out of his way to knock down the entire federal statute as unconstitutional on its face when there are circumstances under which it could be constitutionally applied under the judge’s own reasoning.  The judge’s opinion does not hang together, logically speaking.

An appeal could go either way but, for now, the ruling only applies in the District where the judge sits.  He did not issue a nationwide injunction, as is the fashion these days.  It will probably be a long time before the issue reaches the Supreme Court and is decided there.  The Supreme Court often waits for a conflict between Circuits or other courts of appeal.  But there is a code of silence regarding FGM in Muslim communities, so there are few potential complainants and, consequently, few prosecutions will be brought around the country, if any are brought at all.  These would have to work their way up through the appeals process and produce divergent results before the Supreme Court would get interested, if the common pattern holds.

Be that as it may, pressure will have to be brought on state and federal prosecutors to do their jobs and bring cases, or one tentacle of sharia law will have effectively extended its reach over America.

I discussed the Detroit case in greater detail on Sharia Crime Stoppers radio and you can find the archive here.