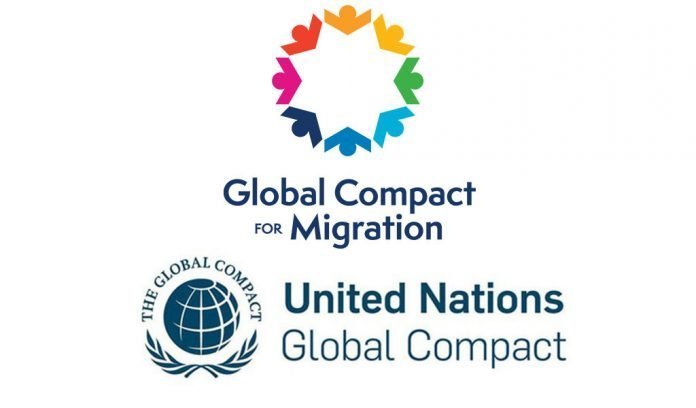 The Liberal government of Prime Minister Justin Trudeau is set to sign the UN Global Compact for Safe, Orderly and Regular Migration at an intergovernmental meeting in Marrakech, Morocco, on December 10, 2018.

Few Canadians are aware of what this UN Global Compact represents; even fewer have been consulted, and without any mandate except for a parliamentary majority, Justin Trudeau is committed in signing Canada into an agreement with far-reaching conseque

nces — not only for Canadians.  Canada agreeing to abide by the agreement will also have consequences for Americans, as among migrants entering Canada might well be those intending to sneak into the United States across the world’s longest open border.

The UN Global Compact spells out, in 34 pages of fine print, requirements for member-states to adopt as policy accommodating unfettered mass migration from the global South to the North.

Human migration is as old as human history. But in modern times, especially in the period following the end of the Second World War, resulting in massive dislocation of the European population, settlement of migrants was arranged and conducted by national governments with support of their citizens.  The Global Compact, instead, is a UN top-down arrangement to deal with the migration problem turned into the most disruptive global crisis in recent years.  This time, the crisis is the result of the massive failure of UN-engineered policies of socio-economic development of post-colonial societies in Africa, Asia, and Central and South America.

What we have witnessed since the fall of the Berlin Wall in 1989 and the end of the Cold War in 1992, is a spike in wars, genocide, failed states, and terrorism. These have cumulatively resulted in mass migration as an escape from the collective failure of people in those countries to build and administer an orderly society, despite trillions of aid dollars provided by countries of the North, directly or through the UN agencies.

And despite this record of the failure of UN-driven development policies, the UN remains insistent on demanding more of the same in its 2030 Agenda for Sustainable Development. The Global Compact is a critical part of this agenda, based on the notion that “Migration contributes to positive development outcomes.”

There is little or no evidence of migration from the global South providing for positive development in the developing countries of that global South. Instead, the Global Compact turns migration into a human rights issue and confers “rights” on migrants that are the same as those of the citizens of the host countries, “rights” those governments are obliged to “respect, protect and fulfil.”

Any relationship at a minimum has two parties involved.  The Global Compact claims for itself “a 360-degree vision of international migration…to optimize benefits of migration.” But it focuses entirely on the needs and rights of one party, the migrants, without taking into account the rights of the people of host countries, given the mounting evidence of how costly, unsettling and disruptive the “invasion” of migrants from the global South to the North has been.

The so-called Arab Spring of 2011, heralding demands for democracy and overthrow of repressive authoritarian governments, very rapidly turned into Arab nightmare. Civil wars in Libya and Syria, with poorly planned interventions by the UN, became uncontainable and spread anarchy. As central authorities collapsed, internal movements of people turned into a mass migration from the Middle East and North Africa, and joined by people from Central Asia and sub-Saharan Africa as economic migrants, headed for Europe.

German Chancellor Angela Merkel’s invitation in 2015 to Syrian migrants was a detonator of what has now become the migration crisis from the global South to Europe and North America.

The current wave of migrants from the Middle East and North Africa might only be the harbinger of an approaching tide gathering force to head north in the near future. It is expected that the African population will double to 2.5 billion by 2050. Africa will remain the poorest continent, and this doubling of population will make it the most crowded continent with a military age cohort of young men ready to march. The trajectory of African migration can only be in one direction: due north.

The answer to this ballooning migration crisis came from Angela Merkel in Berlin in the week when the world marked the 100th anniversary of the end of World War One. In speaking to an audience of German parliamentarians and foreign guests, Merkel said, “In this day nation-states must today – should today, I say – be ready to give up sovereignty.”

And to whom, we may ask?

Since nation-states are obsolete in Merkel’s view, they should fold up and make way for a world without borders administered by multinational organizations under the authority of the UN. But, ironically, Merkel’s advice is primarily directed to the long-standing old and stable nation-states of Europe and North America, and not to the newly established post-colonial states of the global South, such as China, India or South Africa.

The Global Compact that Justin Trudeau has already committed to sign is one among the many agreements the UN has been pushing in the making of a borderless world, including also the Paris Agreement for climate change and R2P or “Responsibility to Protect.”

The UN needs advanced democracies of the North to become signatories and help finance UN-prepared agreements and treaties as international laws, regardless of the customs and legal traditions of these long existing independent sovereign nation-states.

There are, however, a number of developed countries – Austria, Australia, Bulgaria, Czech Republic, Hungary, Israel, Poland, Slovakia, the United States – that have indicated they will not sign the Global Compact in Morocco.

The Global Compact is also Shariah-compliant, since the 57-member Organization of Islamic Cooperation (OIC) is the largest bloc of member-states in the UN. And OIC partnership with the EU in the UN makes for a formidable Red-Green alliance in European and North American politics of the traditional Left joining hands with the Shariah-promoting Islamic organizations, such as the Muslim Brotherhood.

In accordance with the OIC demand at the UN, the European Human Rights Court has ruled any criticism or insult of Islam and its prophet is not protected free speech, and it might be penalized under “hate speech” provisions of criminal codes.

Similarly, Justin Trudeau’s Liberal parliamentary majority in 2017 adopted motion M-103, which condemns any critical discussion of Islam and Muslims as “Islamophobia,” and under the “hate speech” provision of the human rights commissions in Canada might be subject to prosecution.

Moreover, the Global Compact requires, in terms of UN-speak a controlled media that abides by the UN norms and censors any critical discussion of UN policies relating to migrants as not “ethical.”

The recently announced hand-out of $600 million to the Canadian media over 5 years by Justin Trudeau is in keeping with with the Global Compact’s requirement for a docile media trained in UN-speak to enable the making of a UN-envisioned borderless global order.

Justin Trudeau’s readiness to sign the Global Compact comes as no surprise, since in his publicly stated view, Canada is a post-nationalist state with no core identity. Hence, in Trudeau’s version of Canada, there is no tradition to revere, no sacred values to defend, and no identity or history worth preserving.

Justin Trudeau is the poster face of the UN-envisioned borderless world. And into this UN-designed global order for the 21st century Trudeau-led “Canada without borders” is headed.