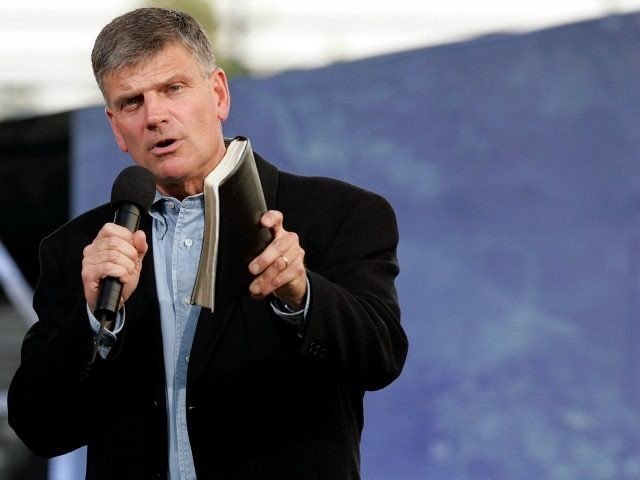 In a two-part tweet Saturday, Rev. Graham, the son of the prominent Christian leader Billy Graham, reminded citizens that Islamic extremism has not ceased to be a menace to the world and that, contrary to popular opinion, the Muslim idea of God is very different from the God worshiped by Christians.

Radical Islam continues to be a huge threat around the world. I thank God for the hard work of the French police & law enforcement who tracked down terrorist Cherif Chekatt. Remember the families of those whose lives were taken and the many wounded. 1/2 https://t.co/edjAvRxde7

In the past, Rev. Graham has said that bloody jihadist attacks should not surprise anyone, since hatred and violence against nonbelievers are central to the teachings of Islam.

“Why does Islam hate so much?” Graham asked in a 2016 Facebook post. “It’s because the Quran teaches its followers to hate.”

“Jews, Christians and others are to be subdued so that Islam may ‘prevail over all religions,’” he added. “It’s all in the final chapter of the Quran—‘Kill or be killed in battle, and paradise awaits,’” he said.

Graham has been an ongoing critic of theories that would equate Islam to Christianity.

In August, 2016, Graham challenged Pope Francis for his remarks suggesting that Islamic terrorism is not religiously motivated.

The pope has frequently declared that all religions seek peace, and that religious beliefs cannot be the force driving Islamic terrorism. Rather than religious belief, poverty and misguided politics are the force behind jihadism, he has stated.

In his reproach of the pope’s interpretation of Islamic terror, Rev. Graham said that religion “is behind the violence and jihad we’re seeing in Europe, the Middle East, Asia, and here in this country.”

“It’s a religion that calls for the extermination of ‘infidels’ outside their faith, specifically Jews and Christians,” Graham said.

Alluding to the murder of Catholic priest Jacques Hamel in northern France by two jihadists, Graham stressed the explicit religious belief that moves Islamic terrorists to perpetrate their crimes.

“It’s a religion that calls on its soldiers to shout ‘Allahu Akbar’ (‘God is Great’ in Arabic) as they behead, rape, and murder in the name of Islam,” he said.

“Radical Islamists are following the teachings of the Quran. We should call it what it is,” Graham concluded.