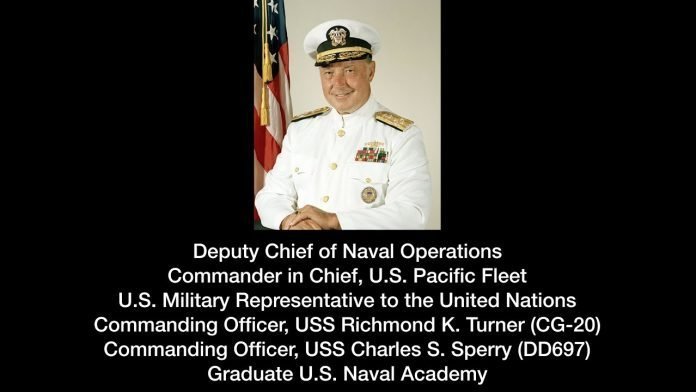 On December 12, 2018 America lost a great man and a great Patriot. UTT published this video as a small way to honor the life of such a great servant of our nation.

James Aloysius Lyons Jr graduated from the US Naval Academy and began a career as a Surface Warfare Officer in the United States Navy. His career spanned 36 years where he served as the Commanding Officer of the USS Richmond K. Turner (CG-20) and the USS Charles S. Sperry (DD697). He served as the U.S. Military Representative to the United Nations. He was a 4-star admiral who became the Commander in Chief of the U.S. Pacific Fleet – America’s largest command. He rose to become the Deputy Chief of Naval Operations for the United States Navy. Admiral Lyons did not stop serving America there. He continued up until his death speaking truth about issues of corruption in the military, the threat of Islam, the threats from Russia and China, and so much more. But it was Ace’s indomitable spirit and sense of humor that endeared him to all who loved him. He was a fighter until the end and an American hero.