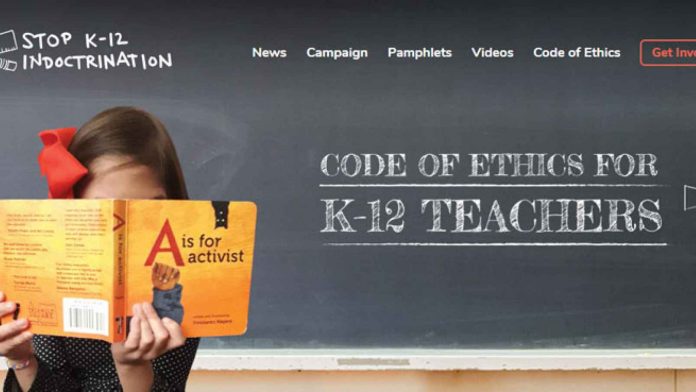 The David Horowitz Freedom Center has completed a comprehensive update and reorganization of StopK12Indoctrination.org, a website devoted to halting indoctrination in America’s public schools. The site exposes instances of classroom and curricular indoctrination across the United States and seeks to work with parents and legislators to enact a Code of Ethics for K-12 Public School Teachers in their states.

Our public schools have traditionally been the cornerstone of our country’s democratic values, but no longer. As recent events documented on StopK12Indoctrination.org reveal, no age group and no corner of our K-12 classrooms are immune from the left’s ideological aggression.

• At the Edina School District in Edina, Minnesota, all employees, even bus drivers, must take “Equity and Racial Justice Training” instructing them that “dismantling white privilege” is at the core of the district’s mission. They must acknowledge their racial guilt, and embrace the district’s “equity” ideology.

• To enhance “cultural diversity,” students at Maryland’s La Plata High School were ordered to copy the Islamic creed “Shahada” which states in part, “There is no god but Allah, and Muhammad is the messenger of Allah.” One worksheet distributed by the school stated, “Most Muslims’ faith is stronger than the average Christian.”

• An Ohio middle school teacher assigned his students to rank 12 individuals, described by race, profession, gender, religion and sexuality, by who is most deserving to survive an apocalypse on Earth. The potential survivors included “a racist armed police officer who is accused of using excessive force”; “a militant African-American medical student”; “a 21-year-old female Muslim international student”; and “a homosexual male professional athlete.”

• Public high schools in Newton, Massachusetts were sued by a coalition of parents after they discovered that their children had been given lessons from the Arab World Studies Notebook, a textbook which is funded by a Saudi Arabian oil company which also funds the terrorist groups Hamas and Al-Qaeda. This textbook falsely claims that there is a “Hollywood Jewish conspiracy” to portray Arabs negatively in film and that Jerusalem is “Palestine’s capital.”

• Maurice Sendak Community School, a public school located in Brooklyn, New York, hosted a “Drag Queen Story Hour” for first grade students during which adult males dressed as women read books to students. A teacher at the school commented, “During our debrief …students were preaching the incredible lessons they had learned, like ‘it’s OK to be different,’ and ‘there’s no such thing as “boy” and “girl” things.’”

These are just a few of the outrageous instances of indoctrination—affecting students as young as five years old—which are documented on StopK12Indoctrination.org.

The centerpiece of the website is the Code of Ethics for K-12 Teachers, a legislative proposal that would forbid public school teachers from using their classrooms for political, ideological, or religious advocacy. Teachers in violation of the Code would be subject to penalties such as probation, suspension and loss of their teaching licenses.

A new feature of the website solicits volunteers to call or email their state legislators to encourage them to introduce legislation adopting the Code of Ethics in their states. Legislators in Virginia have already taken up this challenge, and we expect many more to follow.

The site also includes three recent pamphlets published by the Freedom Center and devoted to the crisis in our nation’s schools: Leftist Indoctrination in Our K-12 Public Schools, Shame of the Schools: How the Democrats Have Destroyed Public Education in the Inner Cities, and Readin’, Writin’, and Jihadin’: The Islamization of American Public Schools.

Visitors to the site may also sign-up to receive weekly email newsletters highlighting the latest examples of the left’s incursion into our children’s classrooms or report instances of indoctrination in their own schools.

“Our public schools have been transformed into indoctrination and recruitment centers for the political left,” explained David Horowitz, founder of the Freedom Center. “It is long past time that we addressed this perversion of our educational system. It is a violation of the trust we have traditionally placed in the hands of the nation’s teachers, and it needs to be remedied by a Code of Ethics that restores traditional non-partisan attitudes to our classrooms.”

Horowitz continued: “The Code of Ethics for K-12 Teachers enforces and restores the traditional approach to a democratic education, which is that children are in school to be taught how to think, not – as in authoritarian and totalitarian societies – to be told what to think.”