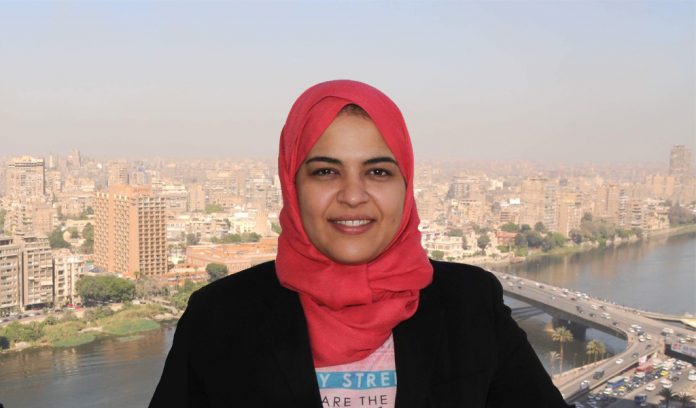 In early 2019, Dalia Ziada will bring a delegation from Egypt to lobby Congress to ban the Muslim Brotherhood.

Ziada is the director of the Liberal Democracy Institute of Egypt.  An Egyptian human rights activist and civil society professional, Ziada has worked for several NGOs based in Egypt and the United States, including the American Islamic Congress and the Ibn Khaldun Center for Democratic Studies.

In 2014, Ziada founded the Liberal Democracy Institute as a think tank dedicated to promoting liberal democracy and fighting Islamic extremism.

Next March, Ziada will be leading a mission to the United States to educate Congress as to the danger of the Muslim Brotherhood, both internationally and in the U.S.

Clarion Project: What made you start the Liberal Democracy Institute?

Dalia Ziada: The main project that inspired me to start the LDI was the “Popular Campaign to Designate the Muslim Brotherhood as a Terrorist Organization.” I started this campaign as a personal initiative in mid-2014, and it led to a fight between myself and the Chairman of Ibn Khaldun Center (where I was working at the time) over the legitimacy of the Muslim Brotherhood and whether they deserve to be called a terrorist organization.

So, I resigned from the Ibn Khaldun Center and started a new think tank through which I became able to better upgrade the campaign against the Muslim Brotherhood.

From 2015- 2016, LDI organized several missions to the U.S. to advocate for the importance of designating the Muslim Brotherhood as a terrorist organization.

Meanwhile, LDI has been involved with several local activities in Egypt over the past four years to promote democratic transformation and healthy relations with regional and international allies.

Clarion Project: In your upcoming mission to the U.S., will you present proof about the connections between the Egyptian Muslim Brotherhood and the Brotherhood-linked group in the U.S.?

Ziada: During our next visit to the US, planned for the Spring of 2019, my colleagues at LDI and I plan to resume our advocacy work regarding convincing respective American policymakers on Capitol Hill and at the State Department to designate the Muslim Brotherhood as a terrorist organization.

This violence is not an isolated incidence that the Muslim Brotherhood can easily disown; they are still practicing it. They also have a trained militia for this purpose. We have documented this militia’s employment by the Brotherhood on several occasions during that period of time.

Clarion Project:  How is the Muslim Brotherhood harming the U.S.?

Ziada: When I first started the campaign to designate the Brotherhood as a terrorist organization, we did not think of doing advocacy work in the US. We thought that if the group was banned in Egypt and some of the powerful Arab countries in the Gulf region, then that would solve the problem.

However, as soon as we started researching, we were shocked by how the Brotherhood has managed to establish a safe haven for itself in the West, particularly in the UK and the U.S.

They have abused the open, democratic atmosphere that the U.S. gives to civil society to establish their network. FBI investigations in the 1980s and early 2000s discovered several abuses by these Muslim Brotherhood-affiliated civil society organizations that work inside the U.S.

These organizations present themselves to American citizens and decision-makers as the sole representative of Muslims. They thus collect money from the American people through tax funds under the label of being charitable organizations. They then end up using this money to “sabotage” the U.S. and the West from within.

From these American charitable donations, [the terror organization] Hamas in Gaza was established. These monies were used by Hamas to fund terrorist attacks — not only against Israel, but also against neighbor countries like Egypt. The terrorist groups operating in Sinai today are a mix of tribal rebels and factions of Hamas terrorists.

The FBI investigations proved that the Muslim Brotherhood has formed a network of so-called charity (or non-profit) organizations in the U.S. with the purpose of “sabotaging America from within” to establish a worldwide caliphate governed by sharia law.

The U.S. has held some organizations in this network accountable for promoting jihad and hatred against the U.S., however over the years, U.S. politicians have tolerated the existence of these Brotherhood groups out of fear of being labeled  “Islamophobic.”

If “sabotaging the U.S. from within” is not a reason good enough for U.S. policymakers to designate the Brotherhood as a terrorist organization and ban all their activities in the U.S., then at least the fact that they abuse religion and democracy to destroy the American-adopted ideals of liberal democratization and civil freedoms should be a reason to designate the group as a terrorist organization.

Clarion Project:  What will you be sharing with Congressional members about the Muslim Brotherhood’s connection to terror?

Ziada: We will offer proof that the Muslim Brotherhood is the parent organization to the terrorist group of Hamas and also provide the documented reports about the group’s violent practices in Egypt post-2013.

Ziada: “The biggest trick the devil ever pulled is convincing the world that he does not exist!” That is a quote from the movie Usual Suspects and exactly the trick that the Muslim Brotherhood is playing on the world today.

They have tried to convince the Western world, especially the U.S. where they have been operating safely for decades, they are not responsible for the terrorism practiced by their affiliates in the Middle East.

Hamas, Ansar Beith Elmakdes and Algaysh Alhorr in Syria, etc. are all terrorist groups operating in the Middle East and label themselves as factions of the Muslim Brotherhood. They adopt the principles of jihad of the Muslim Brotherhood and they act according to the teachings and instructions of the early Brotherhood founders to turn the world into a huge Muslim Caliphate where every human being is ruled by Islamic sharia law.

Osama Bin Laden and Ayman al-Zawahiri, founders of Al-Qaeda, as well as Abu Bakr Al-Baghdadi, the founder of ISIS, used to be members of the Muslim Brotherhood in their early teen and youth years before founding their own terrorist organizations.

The Muslim Brotherhood as well as Erdogan of Turkey and the Brotherhood-affiliated groups in the U.S. and the UK have been telling lies to the West to provide the militia (including Hamas members who have infiltrated Egypt through tunnels between Gaza and Sinai borders) with political cover.

The terrorist group Hamas was founded by the donation money from Brotherhood-affiliated organizations in the West collected under the false title of charity.

Also, who funded and caused the tragedy of “the Gaza Freedom Flotilla?” Erdogan and his Muslim Brotherhood party in Turkey (in cooperation with Brotherhood-affiliated NGOs operating in the West as well as leaders from Hamas in Gaza. After this highly orchestrated work, they are trying to tell the world that they are not monolithic?! Of course, they are. Of course, this claim is nothing but a devil’s trick.

The U.S. must not tolerate this false lie, but rather hold the Brotherhood’s leadership accountable for the violent misconduct practiced by the group’s factions. Let me give you an example: If it ever decides to be more diplomatic, ISIS’ leadership could simply disown the “lone-wolves” who practiced terrorism in Europe under the inspiration of ISIS’ jihadist extremist rhetoric.

Would you consider the ISIS leadership innocent and just punish the lone-wolf terrorist? That is ridiculous. If the Muslim Brotherhood leaders in the West are not able to control their widely-spread terrorist factions worldwide, then they should be held accountable and punished by the US for failing to do so.

Clarion Project: What is the difference between the Brotherhood’s activities in Egypt versus their activities in the West, especially in the U.S.?

Ziada: There is not much difference in the basic principles the group uses to justify their offenses in the U.S. or Egypt. In general, they revolve their big lie around the Israeli-Palestinian conflict.

When a member of Hamas, for example, kills an innocent civilian in Israel, Muslim Brotherhood leaders and groups in the U.S. will label it as an act of “resistance against occupation.”

When Brotherhood militias were practicing terrible violent assaults inside Egypt in late 2013 (aided by members of Hamas), Brotherhood-affiliated or Brotherhood-paid groups in the U.S. were claiming that the Egyptian government was practicing a massacre against the Brotherhood. That was a big lie!

I was personally present at all those events, and I saw with my own eyes how the Brotherhood and Hamas members were armed and shooting at the police forces and killing innocent civilians from local media and other groups who went to cover the events.

You can read my court testimony regarding these Brotherhood militias by clicking here.

Clarion Project: How do the activities of the Muslim Brotherhood in Arab countries help fund their activities in the West?

For example, after the fall of the Brotherhood regime in Egypt and their subsequent vengeful violent assaults, the Qatari regime (a huge supporter of the group) started to pour millions of dollars into the budgets of certain Brotherhood-affiliated groups and sympathizing think tanks in the U.S., the UK, and Europe to alter the truth.

When President Trump took office and the Brotherhood started to feel threatened, those Qatari funds increased even more. Therefore, it is sometimes in the best interest of these organizations to keep promoting the lies about the true nature of the Brotherhood to keep receiving Qatari funds.

Clarion Project: What can people in the West and in Arab countries do to reduce the support and funding of the Muslim Brotherhood?

Ziada: The first and most important step to curb the threat of the Muslim Brotherhood to the world’s security is to defuse the diplomatic and political power of the group’s leaders who are operating openly and freely in Western countries.

The U.S., the UK, the European Union and all the powerful countries in the West must designate the Brotherhood as a terrorist organization and ban all forms of public activities their group or its members. That won’t hurt Western democracy in any way.

Open democracy does not mean opening your door to all and everyone who can simply abuse your democratic system to “sabotage” your country and destroy your ideals. Rather, democracy requires a level of protection against democracy abusers.

That step can only be taken by Western democratic nations like the U.S. The Arab countries have already done their part. They have designated the Brotherhood as a terrorist organization, banned its charity-masked activities all over the region and diplomatically boycotted Qatar for funding the Brotherhood.

The Arab crackdown on the Brotherhood should encourage the U.S. to take quicker steps towards banning the group. Otherwise, the Brotherhood’s next target of their violent operations will be the West.