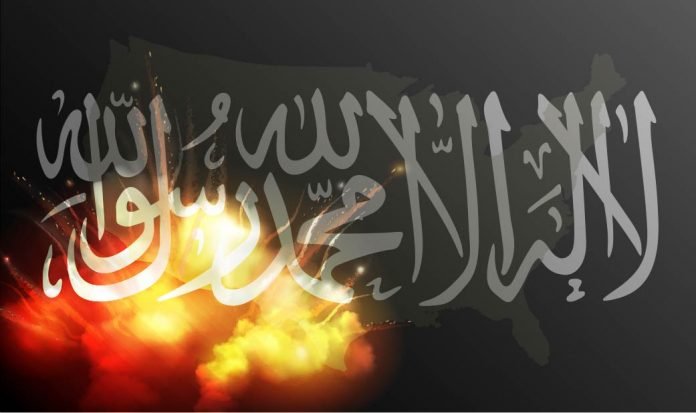 The following three new stories are just the most recent examples of the fact that jihad is alive and well in the US:

An Oklahoma resident who is a Saudi citizen pleaded guilty to visa fraud and  concealing the fact that he attended an Al Qaeda training camp in Afghanistan in late 2000. Naif Abdulaziz M. Alfallaj, 35, was arrested by the FBI after an investigation by the agency’s joint terrorism task force.

Alfallaj, who lived in Weatherford, used his visa which allowed him to be in the U.S. to apply for private lessons at a flight school in Oklahoma. He faces up to 10 years in prison for the visa fraud and up to eight years for making a false statement to the FBI. In addition, Alfallaj can be fined up to $250,000 on each count.

A Florida man was arrested on charges that he sent bomb-making instructions at least five times on a mobile messaging platform which included members who support violent jihad.

arrested during an FBI raid. Ismail, originally from Pakistan, is a naturalized U.S. citizen. The FBI previously investigated Ismail for making terrorist threats at a homeless shelter.

Ismail was close to James Gonzalo Medina, who was sentenced last year to 25 years in prison for attempting to use a weapon of mass destruction at a synagogue in Aventura.

If convicted, Ismail faces up to 20 years in prison on each count of unlawfully distributing information regarding the manufacture or use of an explosive, destructive device or weapon of mass destruction. He also faces a fine of up to $250,000 on each count.

A California man pleaded guilty to trying to provide material support or resources to a foreign terrorist organization, possession of device-making equipment and identity theft.

Amer Alhaggagi, 23, of Oakland, admitted to creating social media accounts for people he thought were ISIS supporters. The video (see below) shows Alhaggagi, a supporter of ISIS, talking about how he was planning to commit terrorist attacks to an undercover FBI agent.

Alhaggagi is said to have told an FBI source he wanted the terrorist threat in the U.S. to reach the level where “every American here thinks twice or three times before he leaves his home. Like, ‘is it necessary for me to leave right now?’”

He also spent time in Yemen where he allegedly met undercover agents “to plan a potential terrorist attack.” According to court documents, Alhaggagi allegedly applied to work for the Oakland Police Department to gain access to weapons which he planned to steal. He also allegedly plotted to bomb gay bars and sites on the campus of the University of California at Berkeley.

He faces up to 33 years in prison.