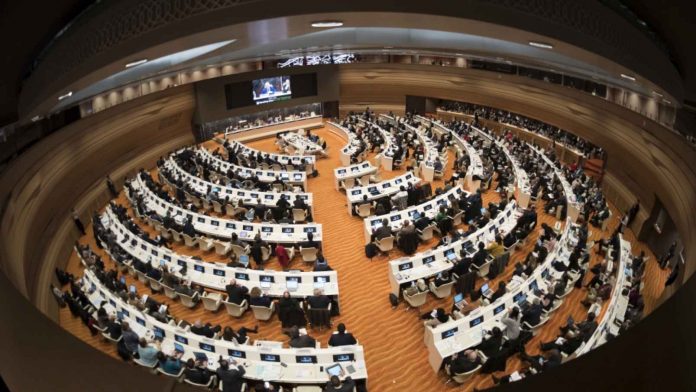 The United Nations General Assembly affirmed what is called the “Global Compact on Refugees” on Monday. There were 181 UN member states voting in favor of approving the compact, with the United States and Hungary voting against and the Dominican Republic, Eritrea and Libya abstaining. On Wednesday, the General Assembly is scheduled to vote and approve, by a somewhat smaller margin, a separate global migration pact formally known as the Global Compact for Safe, Orderly and Regular Migration. This compact was already adopted by 164 states at an international inter-governmental conference last week in Marrakech, Morocco. The United States opposes this compact as well.

Both the refugee and migration global compacts are said to be legally non-binding, although they purport to establish international “norms.” Globalists at the United Nations and elsewhere believe that such norms create, or broaden the scope of, a “universal” right, declared as such by all or a significant majority of the UN’s member states. As interpretations of norms acknowledging such rights are repeated in international bodies and incorporated into the laws or judicial rulings of more and more UN member states, they can then become a part of what international lawyers refer to as legally binding “customary international law,” whether there is a formal treaty or not.

The refugee and migration compacts state that they are guided by or rest on various international human rights legal instruments. The United States is not a party to a number of these instruments and does not consider itself legally bound by them, including the Convention on the Rights of the Child and the International Covenant on Economic, Social and Cultural Rights. The United States is a party to the 1951 Convention relating to the Status of Refugees and its 1967 protocol, which the Global Compact on Refugees cites but goes far beyond by seeking to “translate” the principle of international cooperation “into concrete and practical action.” The compact purports “to provide a basis for predictable and equitable burden-and responsibility-sharing among all United Nations Member States,” which includes “hosting and supporting the world’s refugees.” The refugee compact contains a detailed program of action and a “comprehensive refugee response framework” under United Nations coordination to accomplish this objective. As just one example, the refugee compact calls upon member states to “resettle at least 25 percent of annual resettlement submissions within six months” of “referral” by the Office of the United Nations High Commissioner for Refugees (UNHCR), and to follow UNHCR priorities and criteria for resettlement.

Irrespective of the compacts’ self-descriptions as legally non-binding, advocates for migrants and asylum-seekers can be expected to argue that the compacts are part of customary international law in furtherance of existing international human rights and humanitarian law and supported by an overwhelming number of countries who intend to align their immigration and asylum legal policies with the compacts’ terms. Advocates in the United States would then take their cases to enforce the supposed “universal” rights of migrants and refugees to sympathetic judges in this country willing to incorporate the global compacts’ norms into their judicial decisions. As seen so often, left-wing activist judges are eager to stretch the U.S. Constitution and U.S. immigration laws to fit their progressive social policy agendas. To avoid getting entangled in this legal web spun by globalists, the Trump administration had to clearly and unambiguously disassociate itself from both global compacts. The administration had to state that it considers the United States to be bound legally only by U.S. immigration laws and treaties which the U.S. has signed according to the text of those treaties and no more. Despite the Trump administration’s actions to that end, globalists at the United Nations and elsewhere will persist in their efforts to entangle the U.S. and infringe on its national sovereignty.

Filippo Grandi, United Nations High Commissioner for Refugees, said that the Global Compact on Refugees represented “a new commitment to shared values of solidarity and the quest to just and sustainable solutions for disadvantaged people.” In a not too subtle dig at the Trump administration, Mr. Grandi added: “In this world of ours, which often turns it back to people in need, that has shamefully politicized even the pain of exile, that has demonized and continues to demonize refugees and migrants and sometimes even just foreigners, this compact, in synergy with the other compact, the compact on migration, can really represent tangibly, a new commitment to international cooperation.”

Even before the adoption of the Global Compact on Refugees giving the UNHCR a significant role in facilitating the burden-sharing objectives of the compact, the UNHCR took it upon itself to criticize the United States for not doing enough to help the self-proclaimed asylum-seekers in the caravans from Central America. The UN refugee agency said that it “expects all countries, including the United States, to make sure any person in need of refugee protection and humanitarian assistance is able to receive both promptly and without obstruction, in accordance with the 1967 refugee Protocol [relating to the Status of Refugees] to which the United States is a party.” The UN refugee agency claimed that requiring asylum seekers to present themselves only at official U.S. southern border ports of entry would fall short of this requirement because of insufficient reception capacity at the official ports of entry.  Such insufficient capacity, the UN refugee agency asserted, would result in “significant delays in northern Mexico” and force “many vulnerable asylum-seekers to turn in desperation to smugglers and cross the border irregularly.”

Following the General Assembly’s approval of the refugee compact, Mr. Grandi said that “we are asking everybody to keep their doors open.” He was responding to my question whether, in his opinion, the United States is still obligated to admit asylum seekers from Central America who are offered the opportunity to seek asylum in Mexico before they arrive at the U.S. border but prefer to settle in the United States. “For some people, it may be necessary to go to the United States,” he said without specifying why. Seeking better economic opportunity in the United States than would be available in Mexico is not a valid reason for asylum.

It is instructive to learn that Mr. Grandi and his UN refugee agency have singled out Iran as “a global example through its progressive and inclusive refugee policies.” The challenge, said Mr. Grandi last September, is to make sure Iran, with its large population of Afghan refugees, is supported and funded by the international community so it can continue along this path, adding “Iran has experienced 39 years of a refugee situation since it started receiving Afghans in 1979.” Referring to the Global Compact on Refugees, Mr. Grandi said that it provides “a blueprint for how the international community will engage with countries – like Iran – hosting large refugee populations. This is the global compact on refugees made real, made live. Iran is already implementing many of the responsibilities and contributing to a shared public good – the well-being of refugees. I hope Iran’s example will be taken up by other countries and will receive the support it deserves.”

In short, Mr. Grandi believes that Iran is a shining example of a country fulfilling its global obligation of shared responsibility for refugees while the U.S. is lagging. He envisions more global financial support for Iran, in direct opposition to the Trump administration’s objective to isolate Iran economically. As for the Afghan refugees in Iran who would supposedly be helped by the financial support Mr. Grandi requests for Iran, Mr. Grandi has blinders on. Iran has a miserable record in the treatment of its Afghan population. According to a 2017 Trafficking in Persons Report prepared by the U.S. State Department, “Afghan migrants and refugees, including children, are highly vulnerable to forced labor, debt bondage, and sex trafficking.” It referred to international organization and media reports that “the Iranian government and the Islamic Revolutionary Guards Corps (IRGC) coerced male Afghans resident in Iran, including migrants and refugees, to fight in military brigades deployed to Syria by threatening them with arrest and deportation to Afghanistan.”

The United States is by far the largest contributor of funding to the Office of the United Nations High Commissioner for Refugees. As of  September 24, 2018, the U.S. contributions to UNHCR in 2018 came to $1,291,774,188, nearly triple the amount contributed by the next most generous donor, the European Union. In 2017, the U.S. contributions to UNHCR amounted to $1,450,360,238, a bit more than triple the amount contributed by Germany, the next most generous donor whose open borders policy precipitated the refugee crisis in Europe in 2015.

The United States has nothing to apologize for in standing up for its national sovereignty and opposing global compacts that do not serve the interests of the American people. As the Heritage Foundation concluded in urging the United States not to sign on to the Global Compact on Refugees, “Too often, even non-binding, voluntary compacts serve as gateways to binding commitments and vehicles for politically motivated criticism.” Moreover, if the leadership of the Office of the United Nations High Commissioner for Refugees continues to slam U.S. refugee policies and press for international funding for Iran, the Trump administration should consider cutting back substantially on what the U.S. contributes annually to this UN bureaucracy.