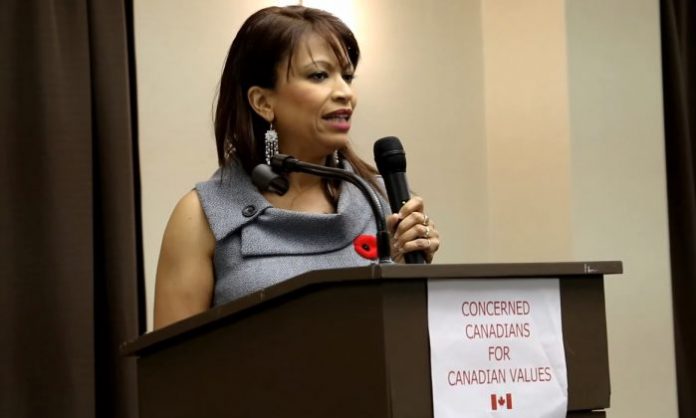 If you denounce Sharia law in a public fashion you will suffer. Outside of the arab world, this also holds true in Canada, where a member of the Canadian Race Relations Foundation board was fired over comments on Sharia law.

Christine Douglass-Williams was a director of the Canadian Race Relations Foundation (CRRF) from 2012 to late 2017, and she has documented her story in a courageous new book: Fired by the Canadian Government for Criticizing Islam. Published in September by the Center for Security Policy—a neoconservative-leaning think tank in Washington—this 103-page story leaves no doubt about the swift enforcement of political correctness under the Liberal Party government.

A mulatto migrant from Trinidad and Tobago and self-described “visible minority,” Williams is an accomplished journalist and expert on Islam, author of The Challenge of Modernizing Islam. As a widely read contributor to Jihad Watch and sought-after speaker, she became a victim of her own success. Her profile rose to include engagements throughout Canada and abroad, notably in Iceland alongside Robert Spencer, author of The Truth about Muhammad and a fellow of the David Horowitz Freedom Center.

The Straw That Broke the Camel’s Back

Her concerns about the nature of Sharia law, particularly its implications for women and migrant integration, were right out in the open and never kept a secret. However, as her perspective garnered traction, murmurings grew.

At a May 2017 event in Reykjavik, titled “Everything You Wanted to Know about Islam but Were Afraid to Ask,” she offered a “personal warning to Icelanders.” She believed the Icelandic population was “being duped,” and she warned that “Westerners need to be street smart as citizens of a culture that idolizes multiculturalism.”

To be fair, she didn’t mince words. Consider the following excerpt from her message to Icelanders:

“Islamic supremacists will smile at you, invite you to their gatherings, make you feel loved and welcome, but they do it to deceive you and to overtake you, your land and your freedoms. … [Sharia] stipulates—among other abuses—death for apostasy, death for gays, a lower value to women, and the full covering of women.”

Whether her statements were accurate or not was never the topic of discussion among her peers in the federal government. Rather, a wave of cheap name-calling grew and eventually submerged her. You can imagine the pejoratives that sought to punish her, which they did.

After progressive media outlets got their knickers in a twist over her comments in Iceland, she came under heightened scrutiny and received a warning call from CRRF Chairman Albert Lo. In Williams’s words, she “was being watched by certain bureaucrats in the Department of Heritage.”

Sure enough, Williams received an invitation for a teleconference with Deputy Minister of Canadian Heritage Graham Flack. After declining and requesting all correspondence be in writing, she received a lengthy letter from Minister of Heritage Mélanie Joly.

Joly pointed to the CRRF mission: “the elimination of racism and all forms of racial discrimination … promoting diversity and inclusion, and respect for democracy.” This letter somehow got to the Canadian Press, which only heightened the tension.

There was a back and forth in the media, with plenty of prominent people coming to Williams’s aid. This support and a detailed letter of explanation from Williams, however, proved to no avail. On December 20, after a complaint to the federal government from the National Council of Canadian Muslims, she received the formal termination of her role with the CRRF.

Canary in the Coal Mine

The CRRF dismissal and its lead-up only form one third of “Fired,” which is appropriate given that the implications carry more weight than the one personal experience. The implications stem from the grounds used to justify the decision and the shariah sympathizers and advocates who have infiltrated Ottawa.

The decision came in the wake of the notorious Motion 103, introduced by Member of Parliament Iqra Khalid and passed by the House of Commons 201-91 in March 2017. This infantile motion against “systemic racism and religious discrimination” alleged an “increasing public climate of hate and fear.”

Supposedly hateful and paranoid Canadians voted in 20 percent foreign-born candidates to the Parliament. That includes more than 20 with dual citizenship. One is Khalid, a Pakistani citizen and the former president of York University’s Muslim Students Association. Animosity is also so common in Canada that Muslims fake attacks to garner high-profilesympathy and attention.

M-103 condemned “Islamophobia” without defining the term and called for “a whole-of-government approach to reducing or eliminating” it. While purporting to target religious discrimination, M-103 failed to mention a single religion aside from Islam. The parliamentary secretary to Joy during Williams’s dismissal happened to be an M-103 advocate—Member of Parliament Arif Virani, a Muslim migrant from Uganda.

The entire Canadian federal government is now, free speech be damned, responsible for a campaign to eliminate undefined Islamophobia. Prominent conservative journalist Ezra Levant knows what lawfare this can lead to, after he published a Muhammad cartoon and faced the Alberta Human Rights Commission in 2008.

Although Levant eventually prevailed, he has since faced a litany of lawsuits from what he describes as the human-rights industry. M-103 will be another weapon against outspoken commentators like Levant and Mark Steyn, codifying that blasphemy against Islam will not be tolerated in Canada, in line with Sharia law.

Williams is refreshingly frank about the problems of identity politics in Canada and the United States. She devotes the second half of the book to how victimology hustlers such as Black Lives Matter have join forces with “civilizational jihadists” and perpetuate an “us-versus-them narrative” for a “match made in hell.”

Sharia adherents have seized the opportunity to portray themselves as victims of ethnic animosity, even though Islam is a religion and not a genetic lineage. Williams explains that “truthful discussions about the global jihad and barbaric cultural practices are being wrongly presented as though they were inciting hatred, ‘racist,’ and hateful.”

These advocacy groups search for a villain to justify their existence and portray their constituents as helpless victims. Meanwhile, the supposed beneficiaries, in the words of Williams, “regrettably remain in shackles, the cycle of the bigotry of low expectations continues, and the oppressed remain stunted.”

Her brutal honesty and references to “Islamic supremacism” will likely be too heavy for most readers, at least those accustomed to the sanitized narrative of legacy media outlets. Even though “Fired” is relatively concise and easy reading, interrupted by block quotes, it faces a tall order overcoming partisanship and confirmation bias.

That trade-off between directness and accessibility is unfortunate. Her topic could hardly be more important: “The hallmark of democracy is freedom of speech, while totalitarianism is marked by little to no freedom of expression.” Further, developments in Canada inevitably impact the United States, as the two nations share a long and relatively open border: “when one sneezes, the other risks catching the cold.”

One puzzling element of this book is that the author took the CRRF and her role there seriously in the first place. There is little doubt her “pure sadness” upon dismissal was genuine. However, did she really believe a federal pet project run by bleeding hearts would resolve ethnic tensions? The documentation Williams provides suggests this taxpayer-funded foundation has been captured as it creates little more than meaningless paperwork and sugar-coated platitudes.

On the matter of confronting those who oppose a liberal, meritocratic society—as Williams sought to do with her articles and speeches—the CRRF’s actions spoke louder than words. The foundation chose to cut loose the very person who had the courage to go beyond virtue-signaling rhetoric. As Williams attests, their actions exemplified the cowardice that keeps us from admitting the “profound truth that … all cultures are not equal.”