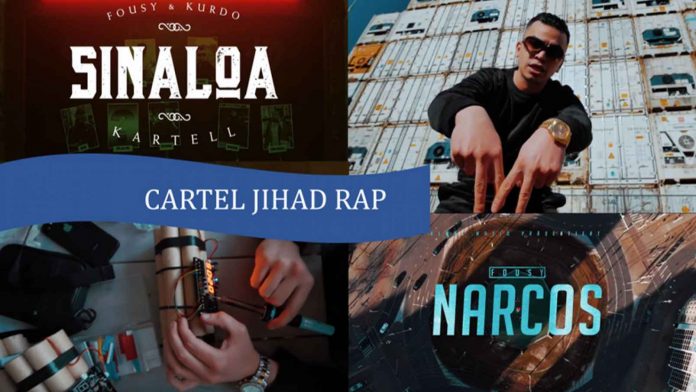 Chérif Chekatt, the 29-year-old perpetrator of the December 11, 2018, mass shooting in Strasbourg, France was designated a gangster jihadist by French Police. The term refers to people previously convicted of various crimes and radicalized in prison. Chekatt, a French born citizen was a hardened criminal with 27 convictions in France, Germany, and Switzerland.

Gangster-jihadists are not just recruited in prison by Islamic extremists. The Sinaloa Cartel appears to have seized upon the opportunity to recruit and exploit hundreds of locals in France and Germany, including children and refugees already primed by jihadist propaganda, many possessing criminal records and combat experience.  International law enforcement agencies have long known that Hezbollah launder money for the Sinaloa cartel. Recently, German law enforcement have been aggressively disrupting the criminal operations of traditional Arab Clans in Berlin and even the operations of La Cosa Nostra. Neither are known to have been affiliated with Sinaloa or Hezbollah. Sinaloa have quickly filled the narco-vacuum, similar to how the Cali Cartel took over Pablo Escobar’s market after his death.  The sudden and alarming proliferation of top-shelf weaponry among Hamas and Hezbollah on the Israeli border is very likely the consequence of a renewed and strengthened alliance between them and Sinaloa, in which German-based “refugees” deal Sinaloan coke and heroin and kick part of the profits back to their Iran-based handlers, Hezbollah who, in turn, shuffle weapons over to Lebanon. This arrangement provides Iran deniability, while also providing Sinaloa broader access to and deeper penetration of the German narco market, as well as plenty of easy money to SUV-driving, Gucci-toting “refugees.”

Music and accompanying videos of German Rappers further indicate a new alliance of transnational criminal organizations drug trafficking and Islamic State terrorism. Jihadist sympathizers and Islamic State fighters have long embraced hip-hop culture, specifically gangsta rap, to promote and disseminate their message via the Internet and social media.  ‘Jihad Rap’ was a successful recruitment tool targeting young men who felt dispossessed and marginalized, one of the most notorious being the German rapper and ISIS terrorist, Denis Cuspert, aka “Deso Dog”. After the fall of the Islamic State Caliphate a new form of gangsta rap emerged in Germany. Best described as ‘Cartel Jihad Rap’ it is a combination of Islamic State nasheed, jihad rap and narco-cultura.

Fawzi Yamouni aka Fousy is a German rapper and producer of Algerian origin from Siegen, Germany. Chérif Chekatt’s most recent prison sentence was served in Singen, Germany. He was radicalized in the infamous area of Konstanz, a town that has been a hub of Islamic radicalism since the mid-1990s. Many of Germany’s prisons are now effective recruiting stations and training camps for cartel jihadis. Chekatt was expelled to France after his release in 2017.

Fousy produces and composes his own songs in the music genre Hip-Hop and Trap. Since 2017 he is under contract with the label Almaz Musiq of the Heidelberg rapper Kurdo who calls himself a “Rapper-terrorist.” On March 2, 2018, the first release of Fousy appeared on Almaz Musiq entitled “20Mille EP”. This release contains 7 songs in EP format including “Sinaloa Cartel” (featuring Kurdo)”, “Sicario” and “Narcos”. In April 2018, the “20 Mille EP” was voted the 8th best release in the month of March by 49 hip-hop releases in the user-voting on the German hip-hop portal Hiphop.de. This inspired an explosion of Sinaloa narco-cultura symbols among German youth, who are making their own narco-cultura tee-shirts, hoodies, and tattoos, imitating and honoring their “role models” like El Chapo, Pablo Escobar, “Tony Montana,” who many believe was a real person.  The emergence of these symbols of narco-terrorists on the streets coincides with Fousy’s growing popularity. They were not significantly present before 2018. Chekatt, also of Algerian origin, was most likely familiar with Fousy’s music, which is especially popular among teenaged ethnic and Muslim populations in Konstanz.

Fousy’s music video ‘Narcos’ is a high-quality polished production that glorifies narco culture and promotes Islamic terrorism. The German language video depicts a luxurious lifestyle with expensive designer watches, duffle bags, clothing, weapons, cars and equipment, but blended and back dropped with jihadi and Salafi symbolism. On the surface the Narcos video glorifies drug trafficking but also functions as a terrorism training manual pointing out specific tactics and targets. It depicts men receiving messages on a shortwave radio, creating fake identities and building a bomb. The names on the forged identification cards include standard German names as well as Arab, Kurdish, and Turkish names, which is meant to suggest a kind of multicultural gang. The pluralism of the new gang has appeal to street criminals like Chérif Chekatt, as well as war-hardened refugees seeking a new home identity.

Images of Islamic State militants fleetingly appear throughout the Narcos video. This differs from narco propaganda which emphasizes drug trafficking and cartel affiliation. These subliminal messages symbolize an ideological identification with the global jihad and a continuation of Islamic State goals. Nasheed rhythms reinforce this imagery, as well as lyrics that categorically list all the cities in which ISIS mass casualty terrorist attacks have taken place in the past four years. The attacks are praised in the name of Allah. The video also includes aerial shots and blueprints of the Port of Rotterdam Harbor, the largest port in Europe. Located in the city of Rotterdam, Netherlands, the harbor appears to be the terrorism target in the video.

The Sinaloa Cartel music video was written by Fousy and Kurdo and released on February 8, 2018. The German language video includes images of a homicide crime scene, expensive cars, hotel rooms, euros and mapping imagery [from Oman City, to Marseille, to Heidelberg, to Frankfurt]. One scene depicts a woman weighing, wrapping and hiding drugs in dead fish while wearing a narco / soldier skeleton bandana. The Sinaloa Cartel had previously smuggled drugs using fish.

She is the only woman in the video. She is white, covered in tattoos, has make up, black hair, long black nails and sexual clothing. She is later depicted lying dead in a bath tub with her throat slashed. Both Jihad and Narco culture is male dominated and women are considered inferior, submissive and subservient to men. Many women are labor and sex trafficked by both cartel and jihadist gangs.