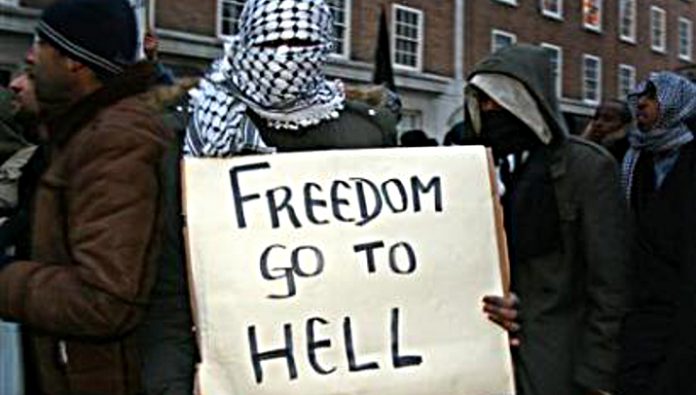 It has been over two years since Omar Mateen slaughtered 49 people and wounded 53 others at the Pulse nightclub in Orlando, Florida, but journalists and authorities are still searching for answers. Just last week, Florida’s St. Lucie County School Board published a 176-page report on Mateen’s behavior as an adolescent while attending one of its schools.

Since the massacre, dozens of theories about Mateen’s radicalization have been proffered – from troubled times at school and purported sexual identity issues to the social pressures of “Islamophobia” and the ostensible wickedness of the unregulated internet. But none of these theories is able to prove its case, except one: the rather obvious point that there is a link between Islamist ideology and Islamist terror.

Curiously, this line of thinking is deeply unpopular. Only very briefly, following the mass shooting at the Pulse nightclub, did a few national security experts and Muslim leaders speculate that Omar Mateen had embraced a militant form of Islam during successive trips to the Middle East to perform Umrah (a lesser, optional Islamic pilgrimage ritualistically similar to the Hajj).

Not enough attention has been paid to these trips, or to the role that Islamist ideas play in the growth of Islamist violence. Commentators prefer to concentrate on the effects of societal ills – factors they perhaps believe American society has a greater ability to fix.

A 2016 Fox News report detailing Mateen’s pilgrimages noted that “his trips to Saudi Arabia would have put him within a day’s drive of Yemen, where Al Qaeda on the Arabian Peninsula has long had a large presence, and where ISIS also has gained a foothold in recent years.” Yet, Mateen did not need to embark on an off-script excursion to hear the strict, puritanical, and often violent approach to Islam sermonized in parts of the Middle East.

Both Mateen’s pilgrimages were facilitated by the New York-based Dar El Salam World Travel (DST), a global travel agency specializing in arranging trips abroad to Islam’s holy sites.  At first glance, DST appears to be just a travel agency. But, the Islamist preachers appointed by DST to serve as “religious advisors” predominantly hail from a single, strictly orthodox Islamic seminary known as AlMaghrib Institute. Muslim Americans simply wanting to fulfill their religious obligations with DST may encounter extremist, radicalizing rhetoric from these ultra-conservative clerics who routinely employ virulently homophobic slurs and anti-Semitic tropes in their sermons and lectures.

Although the recently concluded trial of Mateen’s surviving wife has caused some to doubt that he intentionally targeted a gay nightclub, there is still significant evidence suggesting that he was motivated by homophobic rage. What is abundantly clear, however, is that Mateen was twice the guest of a pilgrimage company whose clerics have a long history of inciting hate and even violence against homosexuals.

With offices conveniently located on Madison Avenue, DST claims to be the number one Hajj and Umrah tour operator in the U.S. and Canada, scheduling religious trips for over 25 years. The agency’s preacher consultants are principally drawn from the AlMaghrib Institute, a Houston-based Islamist “non-profit college.” Indeed, their union is so strong that DST advertises pilgrimage services that are “powered by AlMaghrib Institute in partnership” with the travel agency, making it difficult to determine who, exactly, is leading a journey.

Muhammad Alshareef, a Canadian-born Islamic scholar who personally leads an annual Hajj pilgrimage, founded AlMaghrib in 2002 to bestow “self-accredited” bachelor’s degrees in Islamic Studies. Alshareef wears the term “homophobic” like a badge of honor, telling students during the “Perished Nations” speaker series that, “Homophobia means a fear of homosexuality. Alhamdulillah [praise God], we have a fear of homosexuality. And then they will say it as if it is a derogatory term, but in fact it is a praiseworthy term.”

The Institute’s instructors — many of whom moonlight as DST lecturers in an undeniably interdependent relationship — have studied at hardline Islamic seminaries. These clerics have included Said Rageah, who has called on God to “destroy” the enemies of Islam; and Abdullah Hakim Quick, who has claimed that AIDS is due to the “filthy practices” of homosexuals and that the Islamic position on homosexuality is “death.”

Yasir Qaghi, AlMaghrib’s Dean of Academic Affairs with at least 14 pilgrimages under his belt, has become the face of the DST-AlMaghrib partnership in recent years and has offered practical and spiritual advice to pilgrims since at least 2012. This is a troubling sponsorship considering the imam’s track record of anti-Semitism and Holocaust denial, homophobia, and his rejection of all non-Muslims.

Those familiar with Qadhi’s lectures will remember when he said that society has “regressed — not progressed” since the 1980s when homosexuals were referred to by vile names and “the average masses” were “disgusted” by homosexuality. Qadhi has taught that Christians and Jews are “filthy, impure, [and] dirty,” and that “during a state of jihad” their lives hold “no value.” In one undated lecture, Qadhi even told his audience that killing homosexuals “is all a part of our religion.”  This doesn’t mean we go and do this in America,” he added, “but I’m saying if we had an Islamic state we would do this.”

Sheikh Hamza Yusuf has echoed his colleague’s contempt for homosexuals and the West. In 2011, Mateen participated in the “Sacred Caravan Umrah” led by the sheikh. Yusuf, whom The Guardian once called “the [W]est’s most influential Islamic scholar,” is reported in an Islamic Circle of North America publication to have stated, “Jihad is the only way.” According to Yusuf, America is guilty of “war crimes” and “cannot win a war with Islam. I swear to God,” he said, “[America] must be stopped.”

Although Yusuf recanted many of his radical views following Sept. 11 and has publicly condemned religiously motivated violence, his statements regarding the LGBT community have remained acutely inflammatory. Yusuf has said of homosexuality that “I don’t want someone to say this is a normal, healthy lifestyle. It’s not. It’s pathogenic.” He insists that there is no room in Islam for an “active homosexual lifestyle.”

Homophobic and otherwise extreme attitudes have been so institutionalized among the ultra-conservative clerics working for DST that they do not even attempt to hide their revulsion for the LGBT community. One anonymous lesbian blogger documented her experiences facing repeated anti-homosexual statements as an AlMaghrib student, and remembers learning from Riad Ouarzazi, an Islamic scholar who leads a “Journey of the Hearts” Umrah for DST:

I once heard Riad Ouarzazi mention his time as a taxi driver in California and his dislike and disdain for picking up gay passengers complete with full affected facial and hand gestures. … Once he picked up two gay men and they embraced inside his cab so Ouarzazi made sure to break (sic) suddenly at least once or more so their heads would painfully bump against each other and their ride would be as unpleasant as possible.

Another cleric, Abdul Nasir Jangda (from the hardline Deobandi sect of Islam) is a prominent DST instructor who led a DST Umrah journey as recently as March 2018. Jangda teaches the “Firm Ground” weekend seminar at AlMaghrib. During this course, Jangda elaborates on the scriptural prescription for punishing the “crime” of homosexuality, discussing reprisals that range from public stoning to imprisonment.

Another DST regular, Suhaib Webb has decried the social acceptance of homosexuality in America. He resents the “skinny jeans” and “effeminate clothing” popularized by today’s youth, arguing that the Prophet Muhammad “cursed the man who imitates the woman.” Webb also advocates the stoning of adulterers.

If DST clerics are willing to openly share these views in public, what odious theological convictions are these spiritual shepherds privately sharing with their flock during DST’s guided tours and spiritual tutelage?

During Mateen’s second consecutive Umrah in 2012, an eight day trip organized in a partnership between the Islamic Center at New York University (ICNYU) and DST, Mateen received religious guidance from New York Police Department chaplain and ICNYU Imam Khalid Latif. Although he is known for socializing in moderate Islamic circles, Latif claims that he has been surveilled by the FBI and has “been on a bunch of no fly lists.”

Despite Mateen’s involvement with DST, its religious advisors have ignored calls to condemn Islamist homophobia. Hamza Yusuf was granted the opportunity to reject homophobia when Muslims for Progressive Values (MPV) reached out to him in the aftermath of the mass slayings in Florida to sign a pledge “affirm[ing] the dignity of LGBT individuals” and promising “to eradicate all homophobic teachings” in his community. A recent survey revealed that 45 percent of American Muslims accept homosexuality, and 42 percent support gay marriage. Nevertheless, Yusuf refused to respond to MPV’s overture.

Yasir Qadhi, meanwhile, responded to the Pulse massacre by denouncing Mateen as a homosexual in a June 2016 Facebook rant. Qadhi rejected the notion that Mateen had any ties to “‘radical Islam,” insisting that Mateen was just “a mentally deranged psychopathic American closet homosexual who was battling with his sexual identity.” (After conducting more than 500 interviews and combing through the gunman’s web searches, emails, and other electronic data, FBI investigators found no evidence that Mateen was gay.)

Mateen is not the only terrorist to have encountered AlMaghrib’s extremist preachers. Several terrorist alumni have called AlMaghrib their alma mater. Besides Mateen, Umar Farouk Abdulmutallab — the failed “underwear bomber” who tried to detonate an explosive device he was wearing aboard a Northwest Airlines flight in 2009 – took part in AlMaghrib seminars. Likewise, American jihadist convert Daniel Maldonado (Daniel Aljughaifi) attended classes at the institute before his arrest in Kenya and subsequent conviction for receiving training from a foreign terrorist organization.

Besides lying to the FBI in 2006 regarding Maldonado’s whereabouts, fellow AlMaghrib alumni Tarek Mehanna was sentenced to 17 years in 2012 for joining an Al Qaeda offshoot in Somalia, providing material support to a terrorist group and conspiracy to murder. In yet another case, two former AlMaghrib students were detained in Pakistan in 2009 for attempting to join the Taliban and Al Qaeda and fight U.S. troops in Afghanistan.

In the past, DST has profited from a nearly one-fifth share of the annual American Hajj tourism marketplace. This means that every year, as many as two thousand Muslim Americans taking part in the most spiritually important journey of their lives could encounter the hateful rhetoric and strict, unbending interpretation of Islam that may have influenced terrorists such as Mateen. Given these circumstances, how long will it be before another student of AlMaghrib or pilgrim with DST embraces violence?