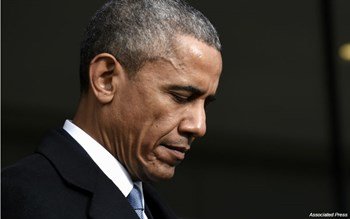 Goodluck Jonathan, the former president of Nigeria who is a Christian, has charged former President Barack Obama with facilitating the persecution of Christians by intervening in the nation’s politics so that he was replaced by the African nation’s current president, Muhammadu Buhari – a Muslim under whom mass carnage has been waged against believers.

Jonathan – who served as Nigeria’s president from 2010 to 2015 – alleges in his new book, My Transition Hours, that Obama went out of his way to meddle in Nigerian politics so that he was deposed and succeeded by his Muslim rival, who has gone after Christians with a vengeance.

“On March 23, 2015, President Obama himself took the unusual step of releasing a video message directly to Nigerians all but telling them how to vote,” Jonathan wrote in his book, as quoted in AllAfrica.com. “In that video, Obama urged Nigerians to open the ‘next chapter’ by their votes. Those who understood subliminal language deciphered that he was prodding the electorate to vote for the [Muslim-led] opposition to form a new government.”

Out with Christianity, in with Islam

A news report published four years earlier in 2011 indicated that Obama was well-aware of the Islamic violence that would be ushered in if the Christian president left office.

“The current wave of [Muslim] riots was triggered by the Independent National Election Commission’s (INEC) announcement on Monday [April 18, 2011] that the incumbent President, Dr. Goodluck Jonathan, won in the initial round of ballot counts,” an April 2011 ABC News report announced. “That there were riots in the largely Muslim inhabited northern states where the defeat of the Muslim candidate Muhammadu Buhari was intolerable, was unsurprising.”

Nigeria, which is dominated by Muslims in the northern half of the nation and by Christians in the southern half – had more promising and peaceful years ahead with the Christian president taking power, but militant Nigerian Muslims did all they could to threaten his leadership and make his presidency as rocky and unstable as possible.

“Northerners [Muslims] felt they were entitled to the presidency for the declared winner, President Jonathan, [who] assumed leadership after the Muslim president, Umaru Yar’Adua, died in office last year and radical groups in the north [Boko Haram] had seen his [Jonathan’s] ascent as a temporary matter to be corrected at this year’s election,” the ABC News report added. “Now they are angry – despite experts and observers concurring that this is the fairest and most independent election in recent Nigerian history.”

Removing America’s allied powers abroad and working toward replacing them with Islamic terrorist-supporting regimes was nothing new under Obama, as one must only look back at the so-called “Arab Spring.”

“That the Obama administration may have imposed its will on a foreign country’s politics and elections is hardly unprecedented,” Breaking Israel News reported (BIN). “Recall the administration’s partiality for the Muslim Brotherhood during and after 2012 presidential elections in Egypt; or its unsuccessful efforts to oust Israeli Prime Minister Netanyahu with U.S. taxpayers’ money; or its efforts – with an admittedly unverified ‘dossier’ – to prevent then-presidential candidate Donald J. Trump from being elected, or by discussing an ‘insurance policy’ in the event that Trump won. Moreover, texts by Peter Strzok revealed that Obama ‘wants to know everything we’re doing.’”

After having his way in the Middle East and essentially handing the region over to Islamic terrorist supporting and harboring leaders, Obama took his pro-Muslim crusade further south to the middle of the Supercontinent of Africa.

“So, in Nigeria, the Obama administration, it seems, sought to right the apparently intolerable wrong of having a duly elected Christian president in a more than 50 percent Christian nation,” BIN’s Raymond Ibrahim asserted. “Two questions arise: 1) Is there any outside evidence to corroborate Jonathan’s allegations against the Obama administration? 2) Is Buhari truly facilitating the jihad on his Christian countrymen?”

He went on to present evidence of the pro-Islamic/anti-Christian foreign policy touted and administered by the Obama administration.

“Former Nigerian President Jonathan’s newly published accusations appear to correspond with the former U.S. administration’s policy concerning Muslims and Christians in Nigeria,” Ibrahim noted. “To begin with, the Obama administration insisted that violence and bloodshed in Nigeria – almost all of which was committed by Muslims against Christians – had nothing to do with religion. This despite the fact that Boko Haram – which was engaging in ISIS-type atrocities: slaughter, kidnap, rape, plunder, slavery, torture, before ISIS was even born – presented its terrorism as a jihad.”

No such thing as jihad?

Just as Obama rejected calls to associate ISIS with Islam – despite the fact that the terrorist group’s official name is Islamic State – he would not link Boko Haram to the Muslim religion.

“In one instance, [Boko Haram] even called on President Jonathan to ‘repent and forsake Christianity’ and convert to Islam as the price for peace,” Ibrahim pointed out. “The Obama administration, however, refused to designate Boko Haram as a foreign terrorist organization until November 2013 – years after increasing pressure from lawmakers, human rights activists and lobbyists.”

The Obama administration’s reluctance to tie Islam to terrorism was also evident on Easter in 2012, when Obama’s Assistant Secretary of State for African Affairs Johnnie Carson tried to disassociate Islam from an attack on a Nigerian church that was destroyed by a bombing that killed 39 worshippers.

“I want to take this opportunity to stress one key point, and that is that religion is not driving extremist violence [in Nigeria],”Carson stated, according to CNS News.

Former President Bill Clinton was also in the habit of deflecting blame away from Islamic terrorists.

“Instead, ‘inequality’ and ‘poverty’ – to quote Bill Clinton – are ‘what’s fueling all this stuff] (a reference to the jihadi massacre of thousands of Christians),” Ibrahim recounted.

In addition to manipulating elections and influencing politics, Obama used taxpayer money to make sure that jihad was alive and well in the central African nation.

“Apparently to prove that it believed what it was saying, the Obama administration even agreed to allocate $600 million in a USAID initiative to ascertain the ‘true causes’ of unrest and violence in Nigeria, which supposedly lay in the socio-economic – never the religious – realm,” the Israeli daily noted.

Besides discounting – or outrightly refusing to acknowledge – Islam’s role in mass killings, Obama and his administration have candidly rebuked Christian government officials for protecting themselves and fellow citizens from jihadists.

“Also telling is that, although the Obama administration offered only generic regrets whenever Christians were slaughtered by the dozens – without acknowledging the religious identity of persecutor or victim – it loudly protested whenever Islamic terrorists were targeted,” Ibrahim explained. “When, for instance, Nigerian forces under Jonathan’s presidency killed 30 Boko Haram terrorists in an offensive in May 2013, U.S. Secretary of State John Kerry – who is also mentioned in unflattering terms in Jonathan’s memoirs – ‘issued a strongly worded statement’ to Jonathan.”

Kerry – who brokered the failed Iran nuclear deal – played a major role in defending and siding with Nigeria’s most notorious jihadists and condemning those who brought them to justice and an early end.

“We are … deeply concerned by credible allegations that Nigerian security forces are committing gross human rights violations,” Kerry scolded Nigeria’s Christian president at the time, according to Reuters.

The Obama administration’s alliance with Islam and opposition to Christianity in Nigeria was also evidenced the following year.

“In March 2014 – after the United States Institute for Peace invited the governors of Nigeria’s northern states for a conference in the U.S. – the State Department blocked the visa of the region’s only Christian governor, Jonah David Jang, an ordained minister,” Ibrahim recalled.

At the time, Emmanuel Ogebe, a human rights attorney, called the Obama administration out for discounting – or outright denying – the fact that Islamic militants incessantly orchestrate and wage violence specifically against Christians throughout Nigeria.

“After the [Christian governor] told them that they were ignoring the 12 Shariah states who institutionalized persecution … he suddenly developed visa problems,” Ogebe asserted, according to WND. “The question remains – why is the U.S. downplaying or denying the attacks against Christians?”

Siding with the Muslim over the Christian

Ogebe, who serves with the U.S Nigeria Law Group based in Washington, D.C., made it clear that Obama is no friend of Christians in Nigeria.

“[The Obama] State Department actually said they preferred a ‘Muslim majority’ country to explain why Obama chose to visit Senegal instead of Nigeria,” Ogebe told Gatestone in an interview published on Facebook. “Ironically, Jonathan sided with the U.S. on Israel in the U.N., while Buhari voted against the U.S./Israel in the U.N.”

It was also noted that Buhari has played a major role in escalating Nigeria’s jihad on Christians.

“Indicators that Muhammadu Buhari – whom the Obama administration helped make president of Nigeria, according to Jonathan – is empowering the genocide of Christians follow,” Ibrahim stressed. “After Goodluck Jonathan became president, thousands of Christians living near Muslim centers in Nigeria were killed. Since getting what they want – a Muslim president, Muhammadu Buhari, in 2015 – Muslims have attacked Christians in ways that are being characterized as a ‘pure genocide.’”

In addition, an umbrella group of several Christian denominations in Nigeria, the Christian Association of Nigeria (CAN), asserted that the Obama-supported Buhari is responsible for allowing an increased number of killings of innocent Christians.

“There is no doubt that the sole purpose of these attacks is aimed at ethnic cleansing, land grabbing and forceful ejection of the Christian natives from their ancestral land and heritage,” CAN proclaimed in a recent statement.

In fact, the number of Christians murdered in just half a year under Buhari’s regime is already four times as great as the number killed during the six years while Jonathan was in office.

“To begin with, significantly more Christians have been massacred under Muhammadu Buhari than his Christian predecessor – mostly by Muslim Fulani herdsmen, who regularly launch raids on Christian villages,” Ibrahim informed. “In just the first six months of this year, 6,000 Christians were slaughtered in the name of jihad. It took three times as long for the Fulani to kill only 1,484 Christians under Jonathan’s presidency.”