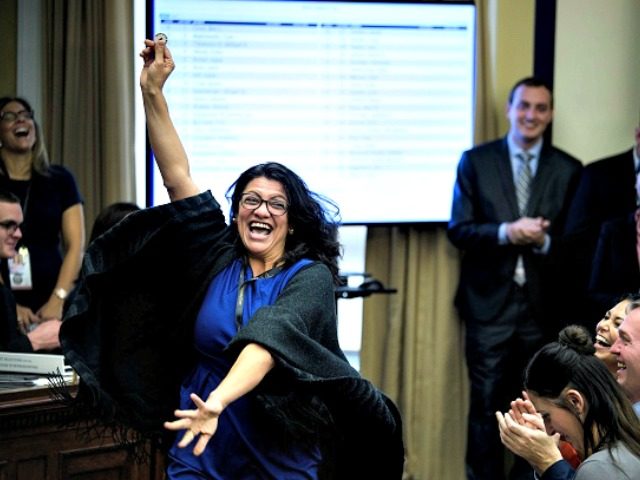 On her first day as a new member of the United States House of Representatives, Rashida Tlaib (D-MI) called on her colleagues to begin taking steps towards impeaching President Trump.

Tlaib was fetted at a raucous reception later in the day by left wing advocacy group MoveOn.org. Her closing remarks there were, “We’re gonna impeach the motherfucker.”

Raucous reception for @RashidaTlaib at MoveOn reception near the Hill. Her closing remarks: “We’re gonna impeach the motherfucker.”

“We’re going to go in and impeach the motherfucker” pic.twitter.com/oQJYqR78IA

In a brief written for her hometown newspaper that was published on Thursday, the same day America’s first Palestinian-American congresswoman will swear her oath to America using a 1734 English translation of the Quran that belonged to Thomas Jefferson, Tlaib says it is time to begin checking and balancing the president.

“We must rise to defend our Constitution, to defend our democracy, and to defend that bedrock principle that no one is above the law, not even the President of the United States,” argued Tlaib. “Each passing day brings more pain for the people most directly hurt by this president, and these are days we simply cannot get back. The time for impeachment proceedings is now.”

John Bonifaz, the co-founder and president of the advocacy group Free Speech For People, joined Tlaib in composing the piece. Bonifaz is well-known for co-authoring The Constitution Demands It: The Case for the Impeachment of Donald Trump.

In the Detroit Free Press article, both Tlaib and Bonifaz argued that members of Congress “do not need to wait” until Mueller’s investigation is complete before attempting to impeach the president:

Whether the president was directly involved in a conspiracy with the Russian government to interfere with the 2016 election remains the subject of Special Counsel Robert Mueller’s investigation. But we do not need to wait on the outcome of that criminal investigation before moving forward now with an inquiry in the U.S. House of Representatives on whether the president has committed impeachable “high crimes and misdemeanors” against the state: abuse of power and abuse of the public trust. Each passing day brings new damage to the countless people hurt by this lawless president’s actions. We cannot undo the trauma that he is causing to our people, and this nation. Those most vulnerable to his administration’s cruelty are counting on us to act—act to remove the president and put this country on a path to true justice.

Tlaib and Bonifaz concluded the op-ed by straying from the moderate Democrats’ argument that impeachment of the president is unwarranted and dangerous in current times.

“We are also now hearing the dangerous claim that initiating impeachment proceedings against this president is politically unwise and that, instead, the focus should now shift to holding the president accountable via the 2020 election. Such a claim places partisan gamesmanship over our country and our most vulnerable at this perilous moment in our nation’s history. Members of Congress have a sworn duty to preserve our Constitution. Leaving a lawless president in office for political points would be abandoning that duty,” Tlaib and Bonifaz argued. “This is not just about Donald Trump. This is about all of us. What should we be as a nation? Who should we be as a people? In the face of this constitutional crisis, we must rise.”