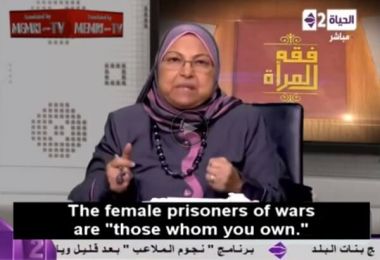 Muslim men are allowed by Allah to rape non-Muslim or infidel women to “humiliate” them, according to a female Islamic scholar from the prestigious Al-Azhar University in Cairo, Egypt.

In a recent interview on Cairo television Professor Suad Saleh said rape is allowed in Islam during times of “legitimate war” between Muslims and their enemies, the Daily Express reported on Monday.

The controversial Islamic scholar claimed that Allah has given Muslim men a “legitimate” way to have sexual relations with slave women.

Saleh also alleged that slavery already existed even before Islam and that Islam only regulated the practice.

She said slave women are those who have been captured as prisoners of war, adding that their Muslim captors have the right to own them.

“In order to humiliate them, they become the property of the army commander, or of a Muslim, and he can have sex with them just like he has sex with his wives,” Saleh said.

Dr. Andrew Holt, professor of history at Florida State College, expressed dismay at the Islamic scholar’s alleged comments, saying that Saleh’s statements could be viewed as the Muslim world’s approval of the enslavement and rape of Yazidi women by ISIS fighters and officials.

Holt said he was surprised that such a detestable crime and human rights violation is sanctioned by a female professor from “Sunni Islam’s most prestigious university” which is more than 1,000 years old.

The anti-Islam Internet group Jihad Watch said Saleh’s statements were based on the Quran. The group said the seizure of infidel girls and their use as sex slaves are all sanctioned in the Muslim holy book.

Jihad Watch cited this Quranic as proof: “O Prophet! Lo! We have made lawful unto thee thy wives unto whom thou hast paid their dowries, and those whom thy right hand possesseth of those whom Allah hath given thee as spoils of war.”

The Qur’an says that a man may have sex with his wives and also with his slave girls, the group says. It cited this particular verse in the Quran: “The believers must (eventually) win through, those who humble themselves in their prayers; who avoid vain talk; who are active in deeds of charity; who abstain from sex, except with those joined to them in the marriage bond, or (the captives) whom their right hands possess, for (in their case) they are free from blame.” (Qur’an 23:1-6)

In May 2011, the Egyptian Sheikh Abu-Ishaq al-Huwayni declared that “we are in the era of jihad,” which means that Muslims could take slaves

“Jihad is only between Muslims and infidels. Spoils, slaves, and prisoners are only to be taken in war between Muslims and infidels. Muslims in the past conquered, invaded, and took over countries. This is agreed to by all scholars—there is no disagreement on this from any of them, from the smallest to the largest, on the issue of taking spoils and prisoners. The prisoners and spoils are distributed among the fighters, which includes men, women, children, wealth, and so on,” al-Huwayni said.

“When a slave market is erected … you go to the market, look at the sex-slave, and buy her. She becomes like your wife, (but) she doesn’t need a (marriage) contract or a divorce like a free woman,” the sheikh said.