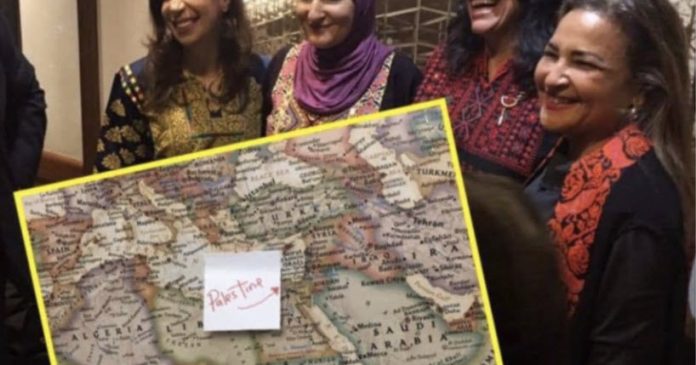 Freshman U.S. Rep. Rashida Tlaib, the first Muslim woman elected to Congress, is already embroiled in controversy within her first day of being sworn into the 116th US Congress.

“I’m now going to be a member of Congress, Inshallah,” Tlaib said at the event. “Inshallah” means “God willing” in Arabic.

Choosing to take her oath on a Quran, Tlaib was sworn in while wearing traditional Palestinian attire with a group of some of the most notorious Jew haters by her side. Along with members of her Palestinian family, Tlaib invited rabid jew haters Linda Sarsour and Rasha Mubarak as her guests.

One has to wonder why the media has continued to build a heroic profile of Tlaib, “the first Muslim woman elected to Congress,” when she is openly prancing around with Jew haters and jihadists who are currently at the center of the Women’s March controversy. Not only has the media praised Tlaib, but they have refused to hold her accountable for her associations with Sarsour and Mubarak.

Let’s take a look at who these two Palestinian women truly are.

Linda Sarsour is a radical left wing Muslim Brotherhood activist. On July 1, 2017, Linda Sarsour gave a speech at the 54th Annual Islamic Society of North America (ISNA) Convention in Chicago. During that speech, Sarsour not only infamously called for Muslims to carry out Jihad against President Trump, but she also used her speech as an opportunity to praise Imam Siraj Wahhaj.

Siraj was not only named in court documents as an alleged “co-conspirator” in the 1993 bombing of the World Trade Center, but he often calls for the killing of innocents in the name of Islam. Siraj once said,

Wahhaj is also the father of one of two men who authorities arrested on August 8 in New Mexico and described as armed “extremist Muslims” after it was discovered that they had kidnapped 11 children who they were training to become “school shooters”.

While fully aware that Siraj is a terrorist co-conspirator, a proponent of Islamic terror, and a supporter of destroying and replacing the U.S. Constitution with Sharia Law, Sarsour still proclaimed Siraj as her mentor.

Tlaib is aware of all of this, yet she still chose to not only invite Sarsour as her guest to the Congressional swearing in ceremony, but she also posed for pictures with Sarsour in the halls of Congress.

What does Tlaib have to say about this? Well, the new Congresswoman has decided to respond to all criticisms with the hashtag #UnappologeticallyMe

Sarsour, who has a lengthy resume of Jew hatred, is also an ally of CAIR, the Council on American Islamic Relations, which has been found to have direct ties to HAMAS.

Hamas has also been classified as a designated terrorist organization by the U.S. State Department and is listed as a co-conspirator in the Holy Land Foundation HAMAS terror funding trial in 2008, which is the largest terrorism financing case in U.S. history. In the Covenant of Hamas, which outlines the goals and motive of Hamas and its members, it states that one of its main goals in the destruction of Israel.

“Israel will exist and will continue to exist until Islam will obliterate it, just as it obliterated others before it.”

Despite the fact that CAIR has been linked to terror financing and is recognized as a terrorist organization in the majority Muslim United Arab Emirates, Talib did not hold back on inviting guests with close ties to CAIR, and she herself has not denounced CAIR. Instead, Tlaib  has chosen to work alongside the organization to push for more Islamic influence in American politics.

Rasha Mubarak, similar to Sarsour, is a Palestinian activist with close associations with CAIR. Currently, Mubarak serves as the President of the Young Democrats of Orange County in Orlando, FL, as well as an organizer for CAIR Orlando.

How did Mubarak begin working for CAIR? Well, on May 20, 2015, Ahmad Abrar Saleem, who served as Orlando Regional Coordinator for the Council on American-Islamic Relations (CAIR),  was arrested in Clermont, Florida. Police say Saleem was intending to meet up with and have sex with a twelve-year-old girl he was chatting with online. However, Sheriff’s deputies busted Saleem in a child sex sting operation and he was charged with “use of computer to seduce/solicit/entice a child to commit sex act” and “travel to seduce, solicit, lure a child to commit sex act.” Instead of condemning his behavior and pedophilia, CAIR rushed to cover up the story, and appointed Mubarak his replacement.

When Mubarak assumed her new role, she never once released a statement condemning the actions of her predecessor. But, then again, why would Mubarak or Talib condemn pedophilia? After all these are two “proud Muslim” women who worship the Prophet Mohammed who is said to have married and raped Aisha when she was six years old.

In November 2012, Mubarak, tweeted, “#LiesImTiredOfHearing Israel has the right to defend herself.” In July 2014, she co-sponsored a pro-Hamas rally with CAIR outside the Israeli Consulate in downtown Miami, where rally goers repeatedly shouted, “We are Hamas” and “Let’s go Hamas.” In August 2014, CAIR-Florida Executive Director Hassan Shibly (her boss) tweeted, “Israel & it’s supporters are enemies of God and humanity!”

Like Tlaib, Mubarak has organized several pro-Palestine marches in Orlando where attendees have been seen waving Hezbollah and HAMAS flags.  Mubarak’s Israel bashing gatherings often feature a man by the name of Said Lufti who was caught on camera by The United West verbally abusing a Jewish bystander, screaming things like “piece of crap Jews with the blood of Jesus on their hands.” Although Mubarak was in arms length of Lufti when he was chanting anti-Jewish slurs, she did nothing to stop him or condemn his behavior. Instead, she enabled it.

Not only is Mubarak friends with Sarsour and Tlaib, but she is also close with Omar, and is reportedly set to be a speaker at the Orlando Women’s March rally on January 19, 2018.

In summary, Tlaib’s guests were two Palestinian women who openly spew Jew hatred and are completely unapologetic about their friendships and ties to pedophiles and terrorists.

While Tlaib may be a new member of Congress, she is also no stranger to political controversy. During a joint campaign event with Ilhan Omar in Minnesota in August, Tlaib forcefully grabbed me and stole my phone when I approached her to ask questions about her anti-Jewish and anti-Israel statements, as well as her refusal to condemn HAMAS.

Tlaib refused to answer my question when asked whether she was would admit that Hamas is a terrorist organization.

During the assault, Tlaib was pulled away from me by Omar, whom I have also confronted and investigated  for violations of Minnesota House ethics rules and evidence that strongly suggests she married her brother for fraudulent immigration purposes.

When I confronted these women, I asked them how they they will serve their Jewish constituents if their loyalties lie with Allah, yet neither Omar or Tlaib had an answer for me. However, within the first few hours of being sworn into Congress, Tlaib removed Israel from a map in her new office and replaced it with a sticky note that says “Palestine”.

Clearly Tlaib has zero intentions of serving her Jewish constituents, because through her actions, she is openly stating she doesn’t believe Jewish people have a right to exist.

When I confronted her five months ago, Tlaib accused me of “stalking.” Fast forward five months and Tlaib is still running away from journalists who ask her questions about her unethical behavior and jew hatred. Directly after being sworn into Congress on Thursday, Tlaib spoke to a group of her supporters and said, “we’re going to impeach the motherfucker”.

Profanity, pedophilia, terrorism, jew hatred. I guess those are now things the media and House Democrats would love for us to  “accept”, given that they continue to give Tlaib, Omar, Sarsour, Mubarak, and many other hateful individuals a pass for their inexcusable behavior and associations.

Good luck with your “diversity” America. You’re going to need it!

Laura Loomer is a conservative investigative journalist and activist. Originally from Arizona, Laura began her career working as an undercover journalist for Project Veritas from 2015-2017. She covers politics, anti-Semitism, immigration, terrorism, the Islamification of the West, and voter fraud. Loomer’s investigations have been broadcasted on every major national mainstream media outlet in the United States, as well as many international publications. Support Laura Loomer’s Independent Journalism here: PayPal.me/lauraloomerPatreon.com/lauraloomerSubscribe to lauraloomer.us today.Follow Laura Loomer on Facebook.