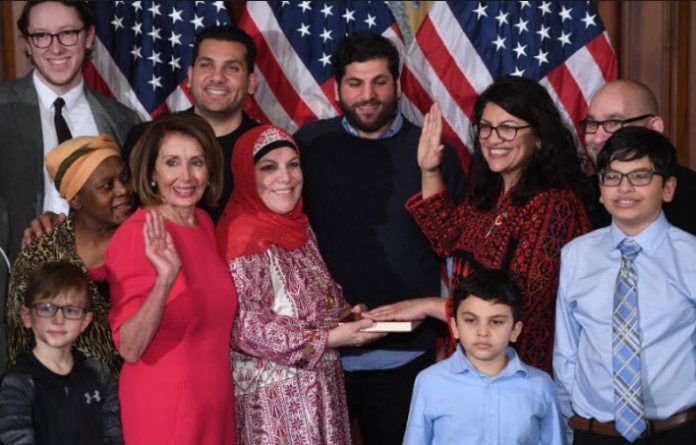 In the news: “Newly elected Detroit congresswoman, Rashida Tlaib, is going to use Thomas Jefferson’s Koran for her swearing-in ceremony.”

Let’s get the facts straight.

Fact: It is not Jefferson’s Koran.  It is Mohammed’s Koran.

Fact: Jefferson owned a Koran to understand and defeat the Islamic Barbary Pirates.  How many members of Congress have read the Koran & Sunna from cover to cover or have any idea what is written on these pages?

Fact: We have evidence of our forefathers’ reference to the Koran: John Adams and Thomas Jefferson to John Jay, March 28, 1786

Fact:  Tlaib is swearing her oath on a Koran in which over 20% written in Medina is about violent jihad.

Fact:  Tlaib is swearing her oath on a Koran that has 17% of its text from Mohammed’s time in Medina devoted to Jew hatred.

Fact:  Tlaib is swearing her oath on a Koran that says that Muslims are superior to all and the non-Muslim (Kafir) is lower than animals. It also says a Muslim is not the friend of a Kafir.

Fact:  Tlaib is swearing her oath on a Koran that says wives can be beaten.

Fact:  Tlaib is disingenuous when she says ““I believe in secular government…“ According to Islamic doctrine, a Muslim must be governed by the Allah-inspired Sharia, because Kafir (man-made) secular laws are not worth following.  So either she is not a good Muslim or she is using taqiyya, sacred deception, to advance Islam.

Fact:  Tlaib is swearing her oath on a book that declares our U.S. Constitution is not the highest law of the land.

In short, Rashida Tlaib, by swearing her oath on a Koran, commits an act of sedition.