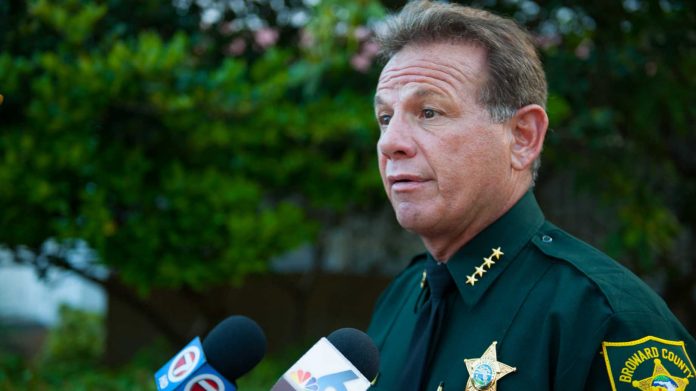 It appears that Broward County Sheriff Scott Israel is preparing to pack up his office.

The two-term sheriff, the object of fierce criticism over BSO’s handling of the Parkland massacre, told his top commanders that he will be removed from office by Gov. Ron DeSantis, sources have told the Miami Herald.

DeSantis, who was sworn in Tuesday morning, had not made a formal announcement of a possible suspension. Israel’s discussions with staff about his ouster was first reported by Miami New Times.

Stuart N. Kaplan, one of Israel’s lawyers, said Israel was in his office at the public safety building in Fort Lauderdale working on Tuesday.

“The governor has not said anything to us, directly or indirectly, as to whether or not the sheriff is going to be suspended,’’ Kaplan said. “He is working and continues to serve the citizens of Broward County.’’

But Jeff Bell, BSO’s union chief, said Israel told his staff on Monday that his ouster was inevitable.

“We know that he is telling everyone at the public safety building that he is going to be gone,’’ said Bell, who was at DeSantis’ swearing-in ceremony in Tallahassee on Tuesday.

Several candidates have been mentioned as possible replacements, including former Broward Sheriff Al Lamberti, a Republican like DeSantis. But Bell would not indicate whether the union was backing anyone.

“What I will say is we want someone who will remove politics out of police work and commit to protecting the citizens and our children in the schools,’’ Bell said.

There were unconfirmed reports that Israel’s undersheriff, Steve Kinsey, had resigned. The sheriff’s communications office did not respond to requests for comment.

Israel, 61, has vowed to fight any effort to strip him of his office. He maintains that while mistakes were made in responding to the shootings, they were not serious enough to warrant his suspension or removal from office.

Israel has long defended his agency’s actions on Feb. 14, 2018, when 17 people — 14 of them students — were slain by a gunman in what is considered the worst mass high school shooting in U.S. history.

A state panel investigating the massacre released a 458-page report last week that detailed how the killer, 19-year-old Nikolas Cruz, was able to shoot so many victims inside the freshman building at Marjory Stoneman Douglas High.

The committee blamed security breakdowns and a lack of training on the part of Broward sheriff’s deputies, some of whom took cover outside the building instead of promptly charging inside to confront the shooter, as officers from neighboring Coral Springs did. The report listed a number of other failures by BSO and the Broward school district. Those other BSO problems included outdated, malfunctioning radios, which prevented rescuers from responding more quickly and possibly saving lives, the report said.

After randomly shooting inside the building — without entering a single classroom — Cruz was able to escape the school grounds. Cruz, who had a history of emotional problems and disciplinary issues documented by the school district, was apprehended by officers one hour and 16 minutes after the first shots were fired. He now faces 34 counts of premeditated murder and attempted murder and could receive the death penalty.

Early on, Israel proclaimed his agency’s handling of the tragedy a success, and was praised by President Donald Trump.

“Mr. President, these are the leaders,’’ Israel said, pointing to members of his command staff. “They led SWAT teams; they led staging areas; they led command posts. These are the leaders who led the first responders for police and fire, our deputies who were able do the amazing things we did in Broward County.’’

But Israel’s portrait of heroism was obliterated when it was learned that the school’s assigned sheriff’s deputy, Scot Peterson, took cover outside rather than run toward the building as the shots were being fired. Later, bodycam video showed another deputy, in leisurely fashion, sorting through his trunk for his bulletproof vest and then crouching behind his car for several minutes as the shots were heard.

In public statements, Israel described his leadership as exceptional, and claimed that he was being used as a scapegoat.

When CNN’s Jake Tapper asked Israel whether he would have done anything differently that may have changed the outcome, the sheriff recited a flip rhyme: “if if’s and but’s were candy and nuts, O.J. Simpson would still be in the record books.”

His comments prompted a public outcry that led the victims’ families, politicians and the sheriff’s union to question whether he was fit for his office.

Florida’s governor can suspend a sheriff — as well as other public officials — for a number of reasons, including criminal activity, neglect of duty and incompetence. But should that happen, Israel will request a trial before the Florida Senate to fight it, his lawyer said.

Kaplan said Israel would respect the governor’s decision and step down in the interim, even though he believes it is politically motivated. DeSantis, a Republican, had said during his campaign that he would likely suspend Israel.

“I’m not sure his decision is being made on merit or on fact — or is he just now concerned about following through on a campaign promise that is politically motivated. Scott Israel has never wavered that the school district and school children and all members of the community are safe. There is a false insinuation on the part of the public — a feeling that BSO is somehow a better agency just because Scott Israel has been removed.’’

The Florida Department of Law Enforcement is conducting a criminal investigation into the response to the rampage.

The responsibility of what action to take ultimately falls on Florida’s Legislature and DeSantis. The 15-member Marjory Stoneman Douglas public safety commission’s report, approved unanimously last week, noted that long after the mass shooting, key people involved in the incident, including sheriff’s deputies and high school assistant principals, provided investigators with accounts that contradicted the evidence, including surveillance video, leading the panel to believe they were either incompetent or untruthful.

But the commission did not offer an opinion on whether the sheriff — or the school superintendent, Robert Runcie — should be removed or resign.

Superintendent of Broward schools, Robert Runcie, and Broward Sheriff Scott Israel speak during a press conference at the Broward Sheriff’s Office shooting range at Markham Park Monday morning, July 30, 2018. Runcie and Israel were talking about the training program at the firing range for trainees in the armed guardians program, men and women who are being trained to keep Broward County elementary schools safe.

“At the end of the day, the governor can suspend and has the power to suspend public officials for almost any reason — whether its malfeasance, incompetence or neglect of duty — all that is in the eye of the beholder,’’ said Robert Jarvis, professor of law at Nova Southeastern University, and author of “Out of the Muck: A History of the Broward Sheriff’s Office.’’

“Presumably, the Senate would go along with DeSantis because the Senate is Republican and would not want to embarrass a very new governor from their own political party.’’