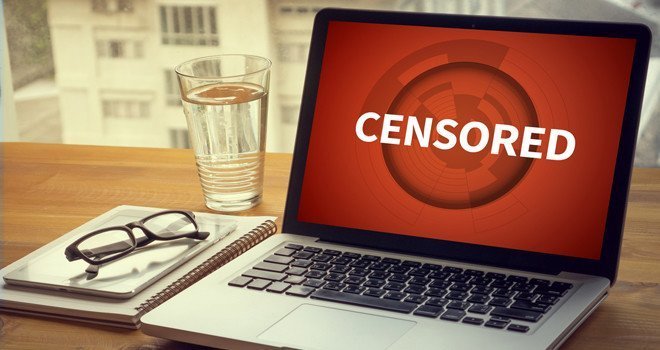 Which organizations are most likely to advance the cause of Islamic dominance? ISIS? Al Qaeda? Hezbollah? The Muslim Brotherhood?

If you’ve been keeping track of world events, these are the names that will most likely come to mind.

There are, however, other names to consider—organizations which at first glance seem entirely non-threatening, yet are capable of clearing the path for the spread of Islam more efficiently than al-Qaeda and ISIS could ever hope to do.

I’m referring to companies such as Mastercard, Discover, PayPal, Twitter, Facebook, and Google. We’re all aware of how much easier life has become because of these companies. But, because they’re so big, they also have the capacity to make life miserable.

Recently, they’ve been making life miserable for critics of Islam. By “critics” I don’t mean those who have nothing good to say about the faith of Muslims. I mean that anyone who simply “critiques” or discusses the doctrines, practices, and laws of Islam in ways that Muslims don’t approve can run afoul of the big tech companies.

Sometimes this is done in a heavy-handed way as when Facebook simply shuts down the Facebook page of a counter-jihad site, and sometimes it is done in more subtle ways. For example, there’s “the search engine manipulation effect” described by formerPsychology Today editor Robert Epstein. By manipulating algorithms, says Epstein, Google can determine which information goes to the top of your search list. Since we tend to assume that items appearing at the top of a list are the most relevant and valuable, we tend to discount or ignore items that come further down the list. For example, if you google Islamic terms, you’re more likely, thanks to Google, to land on Islamic-friendly sites than on Islamic-critical sites. As a result, the information you gather on Islam will come with a positive slant.

For years now, both the financial companies and the media companies have been trying to shut down Robert Spencer‘s site Jihad Watch. Facebook has suspended him. PayPal has refused to process his payments. And Google’s search engine algorithms seem to discriminate against his site. In August, when Spencer attempted to join Patreon—a crowdfunding platform—he was denied service because Mastercard pressured Patreon to deplatform him.

Mastercard and Visa have also refused to process payments to the David Horowitz Freedom Center—a conservative site that features articles on political, cultural and Islamic issues. Although fee processing service has been restored to the center, conservative and counter-jihad sites now live in constant fear of losing one of their main sources of funding.

One might think that the simple solution to the deplatforming strategy is to create alternative platforms: alternative Patreons, alternative Twitters, Facebooks, etc. But, as you can imagine, that’s a tall order. And even if you succeed in setting up a platform, the problem of funding remains. As technology correspondent Allum Bokhari points out in a Breitbart piece:

That’s also why so many free-speech alternatives to Patreon have failed: FreeStartr, Hatreon, MakerSupport, and SubscribeStar all tried to offer a more open platform, and were promptly dumped by the credit card companies. All are unable to do business.

I don’t pretend to be able to interpret the Apocalypse, but that almost sounds like a fulfillment of Rev 13:7—the passage which tells us that no one can buy or sell unless he has the mark of the beast.

Whether or not the Mastercard logo turns out to be the mark of the beast, critics of Islam—along with social and political conservatives, orthodox Christians, and other mavericks—are in for tough sledding. The business of buying and selling has suddenly become quite problematic for them. Technically, they still have free speech, but without a platform their audience will be small, and without funding many will be forced to find other ways to earn a living.

Meanwhile, the rest of us will be left in the dark regarding Islam. The media will still carry puff pieces about Muslim doctors and model Muslim families in order to assure us that the face of Islam is friendly and familiar. But you won’t hear much about those things that seem to hold no interest for the mainstream media: the daily jihad attacks reported in Jihad Watch; the increasing incidence of honor killings, child marriages, gang rapes, and attacks on Jews recorded in Gatestone Institute, Gates of Vienna, andFrontPage Magazine; and the accelerating persecution of Christians by Muslims in the Muslim world which Raymond Ibrahim tracks in detail on his website.

And should Twitter be enforcing Pakistan’s blasphemy laws? Recently, FrontPageeditor Jamie Glazov received a notice from “Twitter Legal” informing him that content on his account was “in violation of Pakistan law: Section37 of PECA-2016, Section 295B and Section 295C of the Pakistan penal code.” Section295 B criminalizes “defiling the Holy Quran” and carries a life sentence. Section 295C mandates that anyone who “defiles the sacred name of the Holy Prophet Muhammad (PBUH) shall be punished with death or imprisonment for life.”

One reason that this ought to be of concern to Catholics is that many basic expressions of Christian faith are considered provocative by Muslims, and some are considered blasphemous. Ringing church bells, singing loudly in church, and conducting outdoor liturgical processions are considered provocative by many Muslims. And several Christian doctrines—the Trinity, the divinity of Christ, and the Crucifixion—are held to be blasphemous. Recently, the Washington Times reported that in Uganda—a majority-Christian country—a Muslim group attacked Christian preachers for “mocking Islam by publicly saying Jesus was the Son of God.”

Will Muslim groups one day complain to Facebook and Twitter that Catholic writers and websites are in violation of their blasphemy laws? And, if they do loudly complain, what will the media corporations do? While you’re thinking that over, consider that Facebook recently blocked an ad for a pro-life movie which tells the story behind the Supreme Court’s Roe v Wade decision. Last year, Facebook also blocked access to the film’s crowdfunding site.

The decision to offend pro-lifers rather than pro-choicers was probably not a difficult one for Facebook to make. Likewise, it’s not difficult to guess whose side the media and financial giants would take if given a choice between offending Muslims and offending Christians. Evidence continues to accumulate that they have already chosen sides. In July, 2017, Facebook Vice President Joel Kaplan visited Pakistan to assure the government that it would remove “anti-Islam” material from its pages. In November of 2018, at the request of the Indonesian government, Google launched a new app which will allow “Muslims to report individuals who commit blasphemy, or insult Islam.”

So curb your tongue, and if you can’t say anything nice about Islam, don’t say anything at all. Islamic radicals won’t necessarily come after you, but Facebook and Google—the self-appointed foes of “hate”—just might.

What we have here is not a communication problem, but a monopoly problem. The game that is being run by the tech companies and the credit card monopolies is just about the only game in town. The old joke was that the only people who had freedom of the press were the ones who owned the printing presses. The new, not-so-funny joke is that the only people with freedom of expression are the ones who own social media companies or major credit card companies.

It’s beginning to look as if the only solutions to corporate suppression of speech are tighter regulations and anti-trust legislation. In the distant past, progressives thought of trust-busting as a noble cause. However, now that they’ve become proficient at the game of monopoly they don’t want any competition.