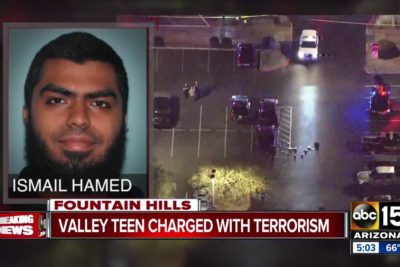 For over 17 years, local and state police have been indoctrinated with “community outreach” programs to Islamic neighborhoods, mandatory police events inside mosques, and training from the FBI whose counter-terrorism agents are untrained in sharia that reveals jihadis’ identities and drive their actions.

The result is that local and state police are not aware of how to identify jihadis nor can they map out jihadi networks in their areas.

The notable exceptions to this are those police, prosecutors and judges trained by Understanding the Threat (UTT).

On January 7th of this year, Ismail Hamed (18 years old) called the small police substation in his home town of Fountain Hills, an upscale suburb of Phoenix, Arizona, and asked to speak to a deputy.  When a deputy arrived on scene, Hamed began throwing rocks at the deputy, quickly transitioned to a knife, and began threatening the deputy.

The deputy retreated and gave numerous commands before firing at Hamed, shooting him twice.

Hamed survived, and was arrested on one count of aggravated assault.

Because the Maricopa County Attorney previously mandated UTT training for all of its attorneys, they understood something the deputy on scene (and others not trained by UTT) did not understand – Hamed is a jihadi, not merely a disgruntled citizen.

The Maricopa County Attorneys Office saw the incident as an act of jihad – what Arizona and U.S. law legally defines as “terrorism” not merely assault.

Therefore, the MCAO was able to assist law enforcement authorities with appropriate charges in this case.

As a sharia-adherent muslim, Ismail Hamed did what Islam commands muslims to do – wage Jihad against non-muslims.

FBI Special Agent in Charge of the Phoenix Division, Michael DeLeon, said the attack is being investigated by the FBI’s JTTF (Joint Terrorism Task Force), and advised Hamed was an HVE, who DeLeon described as “HVE (Homegrown violent extremist).

According to DeLeon an HVE is “a person of any citizenship who has mostly lived in the U.S. and who engages in a terrorist activity to advance an ideology.”

The “Countering Violent Extremism” (CVE) program was created by the European Muslim Brotherhood and sold to British authorities as a means to create “meaningful dialogue” between the Islamic community in Britain and British authorities.  In fact, it is a counter-intelligence operation to give the Muslim Brotherhood the means to significantly influence counter-terrorism policies.

The FBI reviewed the British program and brought it to America about six years after 9/11/01, thereby letting the enemy into the inner circles of influence and decision-making at the FBI and DHS.

DeLeon said HVEs typically work alone.  During the press conference Sheriff Penzone and DeLeon engaged in conversation with the media about the belief Hamed was acting as a “lone wolf.”

This enemy identifies itself as the “Global Islamic Movement” and tells us they are “muslims waging jihad in the cause of Allah to establish an Islamic State under sharia.”  All jihadi organizations on the planet from ISIS to the Muslim Brotherhood state it clearly and publish it via articles, videos, and established doctrine.

The term “lone wolf” does not exist in the Law of Jihad in sharia. “Individual Jihad,” however, does exist.

“Jihad means to war against non-Muslims…signifying warfare to establish Islam” and is “obligatory for every Muslim” [Umdat al Salik, Classic Manual of Islamic Law]

“War…is obligatory on men who are free, have attained puberty, who find the means for going to war.”  [The Distinguished Jurist’s Primer]

“Fight the unbeliever wherever you find them and lie and wait for them in every strategem of war…” [Koran 9:5]

Penzone said, “It is our belief that his intent was to harm the deputy to promote terror.”  Penzone added, “When I say harm, it is very likely that he would have tried to take the life of our deputy, who had no choice but to fire on him to stop him.”  This is an accurate statement because core Islamic doctrine mandates jihad until the world is under Islamic rule.

DeLeon said currently the JTTF is “identifying and confirming the attacker’s motivation.”

Jihadi attacks occur frequently in the United States, and the Federal Bureau of Investigations is the organization local law enforcement agencies refer to as the authority.  This needs to end since the FBI does not understand sharia or the islamic threat, which is the very thing every terrorist and terrorist organization points to as their driving motivation and objective.

If they did they would not use terms to describe “terrorist” like “lone wolf” or “radicalized.”  If they understood the threat they would understand Hamed is a Muslim who committed jihad in the cause of Allah to establish an Islamic State (caliphate) under sharia.

He is not a “lone wolf” or “radicalized” but soldier for Allah legally doing what Islam commands him to do.

If all state law enforcement were properly trained to understand the threat they would correct Arizona media outlets when they report Hamed is a “lone wolf.”  Local police leaders need to ensure their officers are trained appropriately to be able to properly engage in this war and protect their communities.

Hamed is on actor in the larger Islamic Movement.

The Maricopa County Attorney’s Office understands Islam and the Islamic threat.  They have stood strong and used the training provided by Understanding the Threat to identify Ismail Hamed for what he is and charged him appropriately.  This is why Hamed is charged by the state of Arizona and not federally.  We hope other county attorneys across Arizona and the nation will follow in Maricopa County Attorney’s footsteps to protect their communities.

Do you know if your local law enforcement understands the Threat? Understanding the Threat is here to help!  We will train your local police, prosecutors, sheriffs and analysts regarding the Islamic threat.

Let’s see if they have the courage to do it.