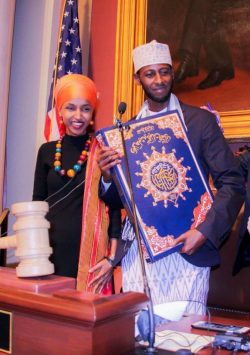 Progressivism has exposed America to self-destruction by welcoming aliens who, by their own confession, brazenly declare that they are here to challenge and then destroy our way of life.

Whereas America’s doors have always been open to people of all races and religions who come with hope and gratitude for the opportunities granted in a free society, we were unprepared for those who want to erase our history and accomplishments, destroy our monuments and  customs, and replace our laws with their barbarism, in the hope of replicating their oppressive regimes here.

Two Muslim women have been voted into office under the cover of deceptive manifestos.  They misrepresented their platform and have thereby candidly sullied the dignity of their positions, insulted the United States, the Executive Office of the President and, specifically, our esteemed President Donald J Trump.

Ilhan Omar, new congresswoman from Minnesota, a Somali immigrant with a history of making disparaging statements against Israel, our ally,was appointed to the House Foreign Affairs Committee by Nancy Pelosi, who has also turned her back on Israel and American interests and security.  Wasting no time to investigate and understand America’s ties to Saudi Arabia or to Israel, Omar, prompted by her personal defiance and beliefs as a Somalian Muslim, not as an American, called for decreased financial aid to Saudi Arabia and labelled Israel an evil regime, challenging the latter’s government and actual existence.

First, the US provides little military aid; rather, we are selling 6,700 missiles as part of a $1 billion deal to Saudi Arabia for its anti-terrorism training and education and for food to civil-war-torn Yemen. Omar is either ignorant or else chooses to dismiss the essence of America’s financial transactions.  Second, she has brought with her the 1400-year history of Islamic hatred for Jews, Christians and Hindus, and Islam’s centuries of condoned torture, enslavement, and slaughter perpetrated on 900 million people who refused conversion to Islam. The slaughter continues to this day, as noted on the Religion of Peace website: 34,494 (at this writing) deadly Islamic terrorist attacks in 29 countries, since 9/11.  During the week of January 19th, 28 attacks in 12 countries, 135 killed, 171 injured, and 6 suicide blasts were reported.

Without once acknowledging Islam’s destructive role in world affairs, how Islamic countries are truly apartheid and violent, she denounces Israel as an authoritative apartheid regime rather than the parliamentary democracy that it is, representing and treating equally every segment of its multi-racial, -religious, -ethnic society.  Her comments are virulently anti-Semitic and, when challenged, she cannot provide a sliver of evidence for her accusations, but has no compunction about repeating them later.  Having beenraised in deep-seated enmity, she ignores the Islamic wars waged against everyone, and the discord sown in what had previously been peaceful nations.

In keeping with the Islamic dedication to taqiyya, an accepted Islamic war strategy, she denied her support of boycotting Israel before her election, but has now admitted her true position.

Omar blatantly supports the effort to debilitate America’s greatest ally – the Democratic State of Israel. The Arab attacks against Jews have been constant for centuries, throughout the Islamic world, in Israel, and across Europe.  The horrific jihadi attacks include stabbings, beheadings, and an ongoing fire jihad over 8,000-plus acres of forestry and agricultural land, its human and animal inhabitants, while also jeopardizing their own dispensable youth and women.  Jihad continues here in stealth from those who work to fundamentally change our laws and allegiances.

Oddly, with the exception of a Muslim tribe, Yibir, that claims to have descended from Hebrews before the arrival of Somali nomads, there are no Jews in apartheid Somalia, so from where does Omar’s intense animus derive except from the Koran and Hadiths, which are rife with Mohammed’s scorn and teachings.  As he stated on his deathbed: “Let there not be two religions in Arabia,” thus sealing the eternal intolerance and fate of all who would not accept Islamic law and rule.  Mohammed commanded Muslims to fight the non-Muslims by “all means possible for all times.”

The centuries of persecution, forced conversion, expulsion and massacre began with the Jews of Khaybar and the Christians of Najran, and have been passed downto the present day. This, then, is the origin of the mindset of Ilhan Omar.

Muslima Rashida Tlaib, another new member of Congress who identifies as Palestinianand blatantly displays her detestation for our President, is unquestionably an expression of hate for America and our Constitution.  She opposes everything that President Trump stresses, particularly his articulation of friendship with Israel and acceptance of Israel’s capital, Jerusalem.  A sticky notewith the name “Palestine” covers Israel on her office map, and she asked to be sworn in on the Thomas Jefferson Koran, the Islamic prayer book that demands holy war and death to Jews and Christiansthroughout the world. The Koran allows no allegiance to our country or our values; Jefferson obtained it in order to understand the Barbary pirates (North African jihadis) who were attacking non-military ships belonging to America and eight other Christian nations in the 1700s.  When attempts to negotiate peace failed, our ambassador learned that the Muslims would always wage war in order to spread Islam, increase their slave trade, and to qualify for vigorous sexual activity inthe Islamic version of heaven.  It was then that Jefferson obtained a 1734 English translation of the Koran to understand the nature of ourexistential enemy.  It was not purchased and kept out of reverence, as Tlaib would have us believe.

Not only did Tlaib not display an American flag at her primary victory celebration, but she also wrapped herself in a Palestinian flag and invited rabid Israeli-hater, Abbas Hamideh, to her celebratory dinner party.  Hamideh is a co-founder of Al-Awda, a group dedicated to the platform of the delegitimization and eradication of Israel.  In a photo with him, she is wearing a keffiyeh, a scarf of jihad, holy war.  There is no doubt: she is not here as an American, and she will not legislate as an American.  She and her like-minded friends, including the vast membership of the Muslim Brotherhood, antisemitic jihadas Linda Sarsour, Tamika Mallory and others are working to control American policies and speech with the goal of establishing sharia law in the West and using the cry of “islamophobia” against any criticism that might alert the public to the scheme.

A member of the Democrat Socialists of America, Tlaib strongly supports the boycott-divestment-sanctions movement (BDS) to bring about Israel’s economic destruction, and to create an “Islamic state in Palestine” in its place.    She is tied to the designated-terrorist group, Hamas, known for its political, social, humanitarian and military activitiescommitted to defeating Israel, and which recruits students for suicide attacks, supports intifada, guarantees support and homes for the martyrs’ families, and works to obstruct Israel’s trade agreements with international propaganda and boycotts, while working to flood Israel with terrorist-trained Palestinians.  Aligned with J Street, one of the most virulent anti-Israel organizations in the history of Zionism and Judaism, Tlaib plans to lead a taxpayer-funded mission of lawmakers to Israel’s Judea and Samaria at the same time that the traditional Israel mission is planned – to oppose the truth with the false Palestinian narrative.  To be noted: recent tax forms for a George Soros Open Society Foundation show an expenditure of $85,307 to Rashida Tlaib (p.97 of a 321-page report), which she failed to disclose when she ran for office.

Both Omar and Tlaib deceived their voters on their views about America, presenting themselves as moderate American citizens, but later admitting their true course – Islamic supremacy.  They were brought here initiallyfor conquest by population, known as hijra, and they now seek to defeat our nation through our own laws.  Tlaib had the audacity to announce, “Each passing day brings more pain for the people most directly hurt by this president, and these are days we simply cannot get back. The time for impeachmentproceedings is now.”  On 4 Jan 2019, 10:08 AM, she tweeted, “Americans have spent decades raping and pillaging my people.”  Her people are Palestinians, not Americans.

Clearly, both women have taken their positions not for their interest in America, but in order to promote their inherent Koranic beliefs, which focus on the destruction of Israel and the supplanting of freedom for worldwide sharia.  Islam is here to be the dominant religion on Earth.  Omar and Tlaib should be removed from their positions, not merely because they are a clear and present danger to our republic, but also because their positions were gained as a result of the misrepresentation of themselves to their constituents.