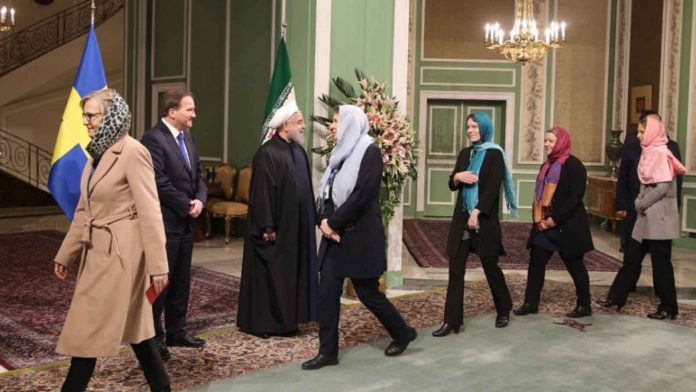 How Foreign Ministry hypocrites submit to Islam and betray women.

If you ever want to get a good hearty dose of global-elite received opinion on any imaginable topic, head straight for the website of the magazine Foreign Policy. With recent articles bearing the bylines of Davos-type luminaries like Fareed Zakaria (CNN’s serial plagiarist and reliable purveyor of the blindingly obvious), Christine Lagarde (doyenne of the International Monetary Fund), and any number of Council on Foreign Relations hotshots, FP – whose annual list of “Top 100 Global Thinkers” is routinely topped by the likes of Angela Merkel, Thomas Friedman, Paul Krugman, and both Bill and Hillary Clinton – isn’t a place to seek out original thoughts or fresh ideas, but is, rather, the #1 go-to spot for strident asseverations of current left-liberal orthodoxy.

Case in point: a January 30 article by Rachel Vogelstein and Alexandra Bro (both of the CFR) entitled “Sweden’s Feminist Foreign Policy, Long May It Reign.” Noting the recent return to office of Swedish Prime Minister Stefan Lofven, Vogelstein and Bro advised that “Lofven should ensure that one of Sweden’s most contentious governing strategies remains firmly in place: its feminist foreign policy.” What is meant by “feminist foreign policy,” they explained, is that Sweden places “the promotion of gender equality and women’s rights at the center of its diplomatic agenda.” As an example, they cited Sweden’s insistence “on women’s participation in critical Security Council debates” and, ultimately, its success at “ensuring gender parity among those providing input” into such UN deliberations.

Sweden’s “feminist foreign policy” was introduced in 2014, and is only one aspect of what Sweden’s leaders describe as a comprehensive commitment to women’s equality. On the Swedish government’s official website, you can read the immodest claim that “Sweden has the first feminist government in the world.” An official handbookabout the “feminist foreign policy” characterizes it as a response to the “discrimination and systematic subordination” confronting “women and girls around the world.” Though remarkably short on specifics, the handbook (which goes on for 111 pages) is long on proud references to the relentless promotion of the policy via speeches, forums, conferences, studies, training sessions, photo exhibitions, roundtable discussions, social-media memes and hashtags, media interviews, glossy brochures (such as the handbook itself), Power Point presentations, “sharing experiences,” and the like.

When you think of the subordination of women today, of course, the first thing you think about is Islam. But the handbook doesn’t mention Islam. Neither, in keeping with the FP worldview, do Vogelstein and Bro. Nor, unsurprisingly, do they bring up a now-notorious visit by a delegation of Swedish diplomats to Iran that took place in February of 2017. By one measure, that trip can be seen as a reflection of feminist foreign policy in action: of the fifteen civil servants who flew to Tehran, eleven were women. Hurrah, hurrah. Yet the images that went around the world at the time hardly provided a stirring picture of “feminist foreign policy.” For in accordance with Islamic rules about female modesty and submission, the women in the Swedish delegation all wore headscarves and long coats. They also refrained from shaking hands with their Iranian counterparts, and at least one of them can be seen putting her hand on her chest in an apparent gesture of respect for – some might say subordination to – her male hosts.

Reporting on that disgraceful spectacle, Adam Taylor of the Washington Post noted that the women wore headscarves throughout their visit, except when they were at the Swedish Embassy. Among the many people who lambasted them was Masih Alinejad, an Iranian women’s rights activist and journalist, who charged that by deferentially complying with Iran’s compulsory hijab law, they had legitimized it. UN Watch protested that Sweden had “sacrificed its principles and betrayed the rights of Iranian women.” Jan Björklund, the leader of a Swedish opposition party, chastised the women for wearing “a symbol of oppression.” Amine Kakabaveh of the Swedish Left Party argued that at a time when “Iranian women are fighting for their right not to wear the veil,” the Swedish women, instead of standing up to the Iranian law, were implicitly telling those women to obey it.

Even a writer for the Swedish government’s own radio service pointed out that the women’s visit to Tehran took place “just days after Sweden’s Deputy Prime Minister Isabella Lövin said the world should look to Sweden for leadership in standing up for women’s rights, particularly when it comes to abortion and a woman’s right to choose.” It’s no surprise, I suppose, that, in the eyes of female Swedish officials, women’s rights comes down to abortion, abortion, abortion – never mind such trivialities as female genital mutilation, forced marriage, marital rape, and the right of a Muslim husband to beat and even kill a disobedient wife.

Trade Minister Ann Linde, who headed up the delegation to Iran, said it was her decision that she and her female colleagues should wear headscarves, because she didn’t want to violate Iranian law. Yet it’s interesting to observe that while these self-proclaimed standard bearers of bold, uncompromising feminism obligingly readily donned emblems of subordination in Iran, Melania Trump, wife of the man whom they despise as the very personification of misogyny, willingly broke Saudi law when she allowed her long locks to flow free during the May 2017 Riyadh summit.

In addition to deep-sixing the intersectional angle, Vogelstein and Bro ignored an exposé, published last October, by Ingrid Carlqvist, a prominent Swedish social critic. Carlqvist interviewed an anonymous long-term member of the Swedish foreign service, who blew the whole premise of a “feminist foreign policy” out of the water. Far from being guided by any coherent vision, feminist or otherwise, maintained this interviewee, the Swedish Foreign Ministry is a site of “organized chaos” that isn’t guided by any consistent vision but is, rather, a “playroom” staffed by people who have “the right party connections or parents” and who yank the ministry this way and that in accordance with their own particular left-wing hobbyhorses. Yep, that sounds about right. Asked specifically about “feminist foreign policy,” the anonymous interviewee replied sarcastically, “Do we have any foreign policy at all? We’re completely in the hands of the EU!….We run ‘sham projects’…or contribute to the Palestinians’ corruption and propaganda.”

In short, it’s not unreasonable to dismiss Sweden’s endlessly vaunted “feminist foreign policy” as a politically correct public-relations gimmick – PC PR, if you will – cooked up by a bunch of puerile, pusillanimous virtue signalers who feel comfortable harping on the supposedly malevolent misogyny of Donald Trump but who, confronted with the brutally patriarchal mullahs in Iran, are quick to don a hijab. No one who is genuinely serious about women’s equality could ever for a moment consider any of this nonsense to be authentically feminist. But try to tell that to the fools at Foreign Policy.