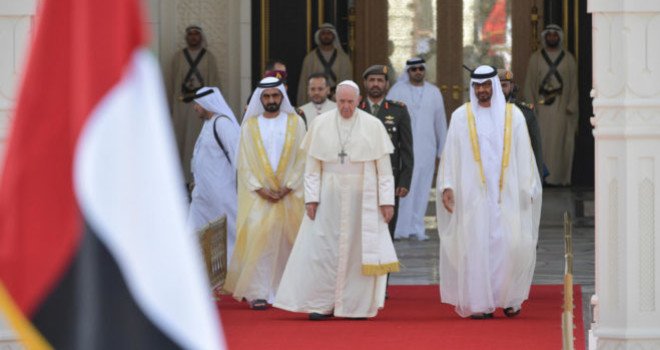 It’s often been said of Pope Francis’s bridge-building initiatives with Islam that the traffic over the bridge goes only in one direction—away from Rome and toward Mecca.

This also seems to be the case with the pope’s “historic” trip to the United Arab Emirates last week. Although the resulting document requires concessions on the part of both sides, it’s unlikely that the Muslim parties will stick to their end of the bargain. On the other hand, it’s quite likely that Catholics will be strongly encouraged to yield a point or two of doctrine. In keeping with what is now standard practice, the new “teachings” contained in the document will be rushed into Catholic schools and seminaries before the ink is dry.

Don’t misunderstand. The “Document on human fraternity for world peace and living together” does make some demands on Muslims.  For example, after establishing that freedom of belief is of divine origin, the document goes on to say:  “therefore, the fact that people are forced to adhere to a certain religion, or culture must be rejected…”

This is an indirect attack on the Islamic apostasy law—a law that says, in Muhammad’s words, “whoever changes his Islamic religion, then kill him” (Bukhari 9.8.4.57). If this law were indeed dropped from the Islamic law books, it would go far to change the face of Islam. If people felt free to leave Islam without dangerous consequences, Islam might quickly change from the “fastest-growing religion” to the incredible shrinking religion. As the renowned cleric Yusuf al-Qaradawi once said, “If they had gotten rid of the apostasy punishment, Islam wouldn’t exist today.”

But it’s highly doubtful that Islamic leaders will take any steps in the direction of abolishing the apostasy law. As recently as 2016, Amhad Al-Tayyeb, the Grand Imam of Al-Azhar, and the co-signer of the document, said:

Those learned in Islamic law and the imams of the four schools of jurisprudence consider apostasy a crime and agree that the apostate must either renounce his apostasy or else be killed.

As Al-Tayyeb pointed out, this is the position of the four main schools of Islamic jurisprudence—the Hanafi, Maliki, Shafii, and Hanbali. It’s also the position of Kuwaiti cleric Othman Al-Khamis who, on his weekly video only three weeks before the Abu Dhabi meeting, said:

Apostates are committing a crime, just like adulterers… Such a person is punished because apostasy is tantamount to scorning Islam, and he is therefore punished as if he cursed the prophet Muhammad or Allah. This is why an apostate is killed.

If Al-Tayyeb is serious about rejecting the apostasy law, he could start by denouncing Othman Al-Khamis and the thousands of other Islamic clerics who uphold the right and duty to kill apostates. But don’t bet on it. Al-Tayyeb, who is a staunch defender of sharia law, most likely looks on the “International Interfaith Meeting on Human Fraternity” as an opportunity for good PR, not as an occasion for changing Islamic law.

Al-Tayyeb realizes that such meetings help to legitimize Islam, making it look as though it is a moderate religion—a religion whose representatives are happy to sign on to sentiments such as “God … has created all human beings equal in rights, duties and dignity, and … has called them to live together, as brothers and sisters…” This is not what it says in the sharia law books. In fact they say quite the opposite.  But words such as “equal” and “dignity” will sit well with the world press and with the many Catholic clerics and academics who will pour over the document as though it were a newly discovered fifth Gospel.

And, in a sense, it is. This is because there are some pronouncements about God’s will in it that are nowhere to be found in the original four. But Francis and friends are rather good at convincing people that recent innovations are, in fact, longstanding Church teaching. Thus, in a great many schools, colleges, and seminaries it is already taught as gospel truth that Islam is an “Abrahamic religion,” Catholics and Muslims worship the same God, Muslims revere Jesus, and Catholics and Muslims share the same moral values.  Although all these assertions are highly problematic, the “problematics” are rarely addressed. So the novel parts of the Abu Dhabi document may soon become the new orthodoxy.

Although Fr. Raymond de Souza calls it a “minor controversy” there is a line in the joint document that several theologians are worried about. It states:

The pluralism and the diversity of religions, colour, sex, race and language are willed by God in his wisdom…

“Colour, sex, race, and language”? Well, yes. But did God will a “diversity of religions”?  According to several theologians, this contradicts many passages in the gospels. One Dominican theologian said that the statement “in its obvious sense is false, and in fact heretical.”

Would an all-wise God give different marching orders to different people? Would he reveal to one group that he is a Trinity, and then reveal to another group that he is not? Would he reveal to one set of believers that Jesus in the Son of God and then, 600 years later, reveal to another set that anyone who says Jesus is the Son of God is accursed? Would he, in short, deliberately create two religions that were destined to come into conflict? To paraphrase Blake, “Did He who made the lamb religion, make the lamb-slayer religion?”

And then there’s the minor matter of the First Commandment: “I am the Lord your God, who brought you out of the land of Egypt, out of the house of bondage. You shall have no other God’s before me” (Ex. 20: 2-3). Not much diversity of religion there. Nor in the New Testament. Indeed, Christ and the apostles seem to put the emphasis on exclusivity rather than diversity. Take this verse from Acts: “And there is salvation in no one else, for there is no other name under heaven given among men by which we must be saved” (Acts 4: 12). Here are some more examples:

You will notice that there’s not much said about Muhammad in these passages. In fact, nothing at all. Of course, the Koran has very little to say about Jesus, except that he’s not divine, wasn’t crucified, and didn’t rise again. But he will be present at the Day of Judgment to condemn to hell all those Christians who fail to convert to Islam (4:159).

It doesn’t seem like much of a foundation on which to build bridges between Christianity and Islam. Nevertheless, Pope Francis seems determined to try.  And in the process, he seems quite willing to employ novel theological formulations (e.g., “the diversity of religions … are willed by God) and questionable assertions of facts. The pope mentioned several of these dubious “facts” upon his return to Rome from the UAE:

The Christian and Islamic worlds appreciate and protect common values: life, family, religious sense, honor for the elderly, the education of the young, and others as well.

Well, yes, broadly speaking. But when you drill down to the details, it turns out that Islam values Muslim lives much more than the lives of Christians and Jews, does not share the Christian view that marriage should be monogamous, makes provision for honor killings (see Reliance of the Traveller  o1.2) and, in general, values many things that Christians consider to be sinful and even criminal.

As Islam expands further into the Western world, it makes sense for Christians and other Western citizens to acquire a more accurate understanding of Islam. Sadly, most of the Church’s efforts in this area have been geared to obfuscating the dangerous differences while emphasizing the surface similarities between Christianity and Islam.

And the pope has become the obfuscator-in-chief. One of his consistent claims is that terrorism has nothing to do with any religion. He seems to believe that religion by definition excludes violence and intolerance. (Has he never heard of the Aztecs? The worshippers of Moloch? The religion of Baal?) And he assures us that whenever religious people do bad things, they are violating their own religious tenets.

He returns to this theme in the “Document on Human Fraternity,” which, judging from the language and the contents, seems to have been written almost entirely in Rome. The document asserts that war, hate, hostility, extremism, and violence do not stem from religion, but rather are “the consequences of a deviation from religious teachings.” Eight paragraphs later we read that “Terrorism is deplorable … but this is not due to religion. It is due, rather, to an accumulation of incorrect interpretations of religious texts…”

Really?  What then would be the correct interpretations of the following texts?

Would Pope Francis or any of his advisors care to explain what are the correct, peaceful interpretations of these and dozens upon dozens of similar texts in the Koran? Should “cast terror into the hearts of the unbelievers” be interpreted to mean “love your neighbor as yourself”?

Until they can offer some evidence that they know what they’re talking about, they should stop issuing high-sounding statements about the compatibility of Islamic beliefs and Christian beliefs. Thanks to decades of sugarcoated, gesture-of-friendship pronouncements, Catholics are already badly informed about Islam. As the world becomes an increasingly dangerous place for Christians, they need to see beyond this gauzy presentation of the world’s most aggressive religion.

Yet Francis seems bent on layering on even more coatings of sugar. Or would mortar be a better word? For all his talk of tearing down walls, he is, in effect, building a protective wall around Islam. The wall is designed to prevent Christians from looking too closely at the actual teachings of Islam. One brick in the wall tells us that God wills a diversity of religions; another suggests that Christianity and Islam share the same basic values; still another teaches that no religion advocates violence or intolerance.

But this syncretism is either wishful thinking or deliberate deception. As any student of history can attest, many religions have endorsed violence and intolerance, and Islam is no exception. But Francis and his advisors seem uninterested in providing Christians with an objective knowledge of Islam. In the service of what they hope will be a future reconciliation of the two faiths, they prefer that Christians be exposed only to pleasant and upbeat narratives about Islam.

Unfortunately, there is nothing in Islamic doctrine that calls for mutual reconciliation. What Islam seeks from other religions is not reconciliation, but submission. Catholics who have been nursed on fantasy narratives about Islam are in for a rude awakening.