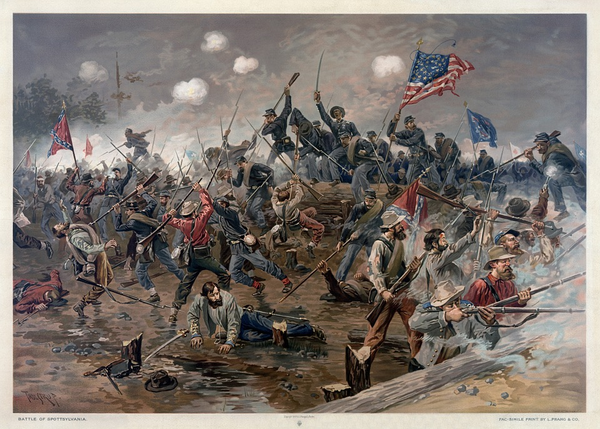 In an excellent article by Jeff Lukens here on American Thinker, he asks the question, “Is a second civil war coming?”  In reply, I say that America’s second civil war has already begun.  Its opening shots were fired by Barack Obama when he stated, “We are five days away from fundamentally transforming the United States of America.”

Most of this country is center-right and never considered America a place that needed transformation.  Most people can think of things they would change but few believe the nation needs to be torn down and rebuilt.  Obama failed but the left soldiers on in its quest for a new America remade in their own image.

When Obama went on his world apology tour, he wasn’t apologizing for America, he was apologizing for Americans.  This is the essence of this second civil war.  Leftists are demi-gods who believe they are America and that anyone who does not believe in them cannot lay legitimate claim to this country as their own.

Yes, this war has begun.  The opening skirmish was the Obama presidency itself, which history will see as a failure, despite what the media want us to believe in the here and now.  Sure, he passed ObamaCare and Dodd-Frank, overregulated, and ruled by executive diktat to great media acclaim.  Yet, ObamaCare and Dodd-Frank have been whittled away by legislation and judicial rulings, while Trump has prioritized deregulation and reversed many of Obama’s illegal executive orders.

The war’s second battle was the 2016 presidential election when Hillary Clinton, Obama’s chosen successor, lost to a television personality whom very few took seriously as a candidate.  Trump won despite the Obama administration conspiring with the Clinton campaign to steal the election and has remained as president even as that conspiracy fundamentally transformed into a failed coup attempt to depose him.

Trump’s presidency has been the third battle and with his string of successes, the battle is being won.  This, despite near-universal acrimony and condemnation among the media, the Democrats, and the left.

But, “what difference, at this point, does it make?” because these victories are pyrrhic.  As the eminent Michael Walsh said of the left, “they never stop, they never sleep, they never quit.”  Democrats are chipping away at this nation with their policies.  This is a war of attrition and we Americans are being attrited.

For example, their “open borders” policy is effectively importing a new electorate — one guaranteed to vote for them.  The left agrees with Obama, there is nothing wrong with America, it’s those damn Americans, so they are going to drown the conservative vote with new Democrats.  It’s the same with their policy of “everything should be free.”  Why vote for someone who promises equal opportunity when someone else promises a better outcome?

Nuclear winter became global warming became climate change became “we want total control over everything.”  The reason why Democrat candidates for the presidency so quickly signed on to my congresswoman Alexandria Ocasio-Cortez’s Green New Deal is its promise of comprehensive control over every aspect of our lives.  Eliminating planes, trains, and automobiles will keep us close to our homes and jobs or for those “unwilling to work” in their basement enjoying their “universal basic income.”  Dependent people without mobility are easier to control.

The 2020 election looms as the next battle and it will be hard fought because Democrats have myriad policies that may sound great but are really about control.  They have always been masters of micturating down our leg and telling us it is raining.

Yet, they don’t need to trick us into acquiescence, because even should Trump win, without a complete reversal by the Democratic Party, a renewed free and fair media, and a return to the principles upon which this nation was founded, this war will continue, and it is only a matter of time before the left again wins the Presidency, or the House, or the Senate — or all three.

When that happens, this civil war will become hot because the Democrats are going to come for our guns.  An armed citizenry is a free citizenry, and they can’t have that.

The third most populated nation with 330,000,000 people, America has an estimated 350 million guns in circulation; any effort to seize them will call for the total mobilization of our armed forces, city and state police, and the National Guard.

People are not going to turn in their guns and politicians who think they will do so are being naïve.  Fighting will surely ensue as the forces of the regime go door to door to try to take them.

Many of those empowered to confiscate weapons won’t obey orders.  Defections will be common and there will be fighting in the streets, limited at first, but it will soon break out into open rebellion.  The regime will become increasingly strident and many states will refuse to comply.  Using Democratic-run “sanctuary cities” as an example of state nullification of federal law, talk of secession will become rife.

The ruling leftists will, of course, be surprised, and orders will be given to the remaining loyalist forces to put down the rebellion.  In the end, the death toll will far exceed the 620,000 people who died in our first civil war.

It can’t happen here?  Open your eyes, it has already begun.